The proclamation by the 69th General Assembly of United Nations to observe June 21st of every year as the International Yoga Day gives countless cheers and immense pride to all the Bharatiyas, people of Bhartiya origin and millions of Yoga practioners across the globe. It becomes all the more delighting that the proposal for an International Yoga Day moved by the Honourable Prime Minister of Bharat in his UNGA speech on 27th September 2014 received an unprecedented response. Nepal supported it immediately and 175 member states co-sponsored the resolution which was adopted within a short span of less than three months on 11th December 2014, by consensus without vote.

The Akhil Bharatiya Pratinidhi Sabha wishes to draw the attention to the fact that Yoga is Bharat’s civilizational contribution to the world. Derived from the root ‘Yuj’ – meaning union and samadhi, Yoga is not limited to physical exercise but is essentially a holistic way of life leading to the union of body mind, intellect and soul as envisaged by sages like Maharshi Patanjali. It is verily described in scriptures as cessation of fluctuation of mind (Yogashchittavrittinirodhah), means for calming the mind ( Manah Prashamanopayah Yogah ) and equanimity (Samatvam Yoga Uchyate) and leads one to peaceful and healthy life. Today growing number of people, be it common masses, celebrities, entrepreneurs and statesmen of different cultures across the world are adopting Yoga as a way of a balanced lifestyle tuned with nature. The ABPS notes with gratitude the contribution of scores of Saints, Yogacharyas and Yoga trainers in espousing the cause of Yoga all around the world. It is the duty of all the Yoga followers to further spread this message of Yoga far and wide across the continents.

The ABPS compliments all those who facilitated the adoption of this historic resolution; Bharatiya diplomats, member states co-sponsoring and speaking in favour of it and the UN officials. It earnestly believes that the observance of Yoga Day and adopting Yoga based integral living will lead the world to a genuine environment of universal oneness and harmony.

The ABPS urges the union and state governments to carry forward this initiative by introducing Yoga as a part of curriculum in education, supporting research in Yoga and make all possible efforts for promoting Yoga in social life.

The Pratinidhi Sabha appeals to all the countrymen including swayamsevaks, people of Bharatiya origin and Yoga followers to endeavor earnestly for spreading Yoga to make the globe happy, healthy and sustainable.

Sun Mar 15 , 2015
Nagpur March 15: RSS today strongly urged the government to take care of Hindus who are migrating to India from other countries. “Government should take care of migrated Hindus by all means; those are facing problems outside India.” said RSS Sarakaryavah Suresh Bhaiyaji Joshi to Press reporters here in Nagpur on […] 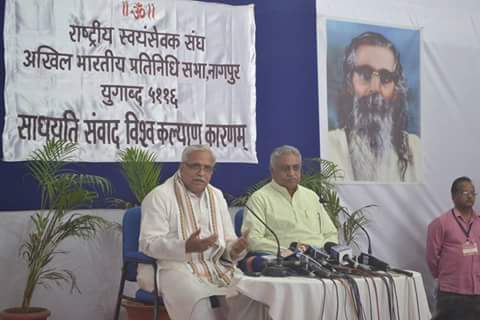