New Delhi January 20: RSS has clarified and termed few media reports as “baseless” about its chief Mohan Bhagwat being unhappy over former IPS officer Kiran Bedi’s entry to BJP and said it was an “evil design” to project a rift between the Sangh and the government.

“News about Dr Bhagwat ji disapproving Kiran Bedi’s entry to BJP is baseless. It’s an evil design to show a rift between RSS & Govt,” RSS Prachar Pramukh Dr Manmohan Vaidya said on Twitter on Saturday. There have been few baseless reports in few media of Bhagwat disapproving Bedi’s entry into BJP and the party projecting her in a larger frame ahead of Delhi assembly elections. Kiran Bedi had joined the BJP on Thursday. Bedi had also met Prime Minister Narendra Modi ahead of her joining the party and said she was “inspired” by him.

BJP on Monday declared India’s first woman IPS officer Kiran Bedi as its chief ministerial candidate in Delhi and made her in charge of the campaign committee. She will contest from the Krishna Nagar seat.

“The BJP will contest the Delhi elections under the leadership of Mrs Kiran Bedi and she is also the party’s Chief Ministerial candidate,” BJP president Amit Shah declared after the meeting of the Parliamentary Board.

He said she will contest from Krishna Nagar which is a “traditional” seat of the BJP. In the last election Harsh Vardhan had won from here. He later contested the Lok Sabha election.

I am very grateful to the leaders and would like to thank the party leadership,” Ms. Bedi said on hearing the news.

Wed Jan 21 , 2015
Bengaluru January 21: Karyakartas (Activists), Swayamsevaks(Members), Hitaishi’s (Wellwishers) and a very large group of supporters of Rashtreeya Swayamsevak Sangh (RSS) to organize BHARAT MATA POOJAN programs at their house level across Karnataka on January 26, Monday 2015. The celebrations are made on nation’s 65th Republic Day on January 26. How […] 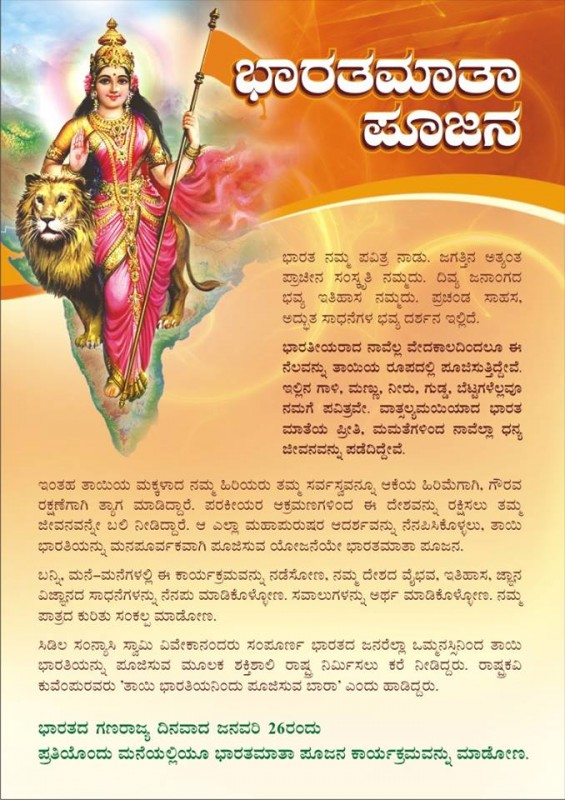