The scorching heat of this hottest May in Nagpur does not deter these 870-odd youths from following their rigorous daily routine that begins at 4 am and goes on till the lights are put off at 10 pm. The routine includes varied physical exercises and yoga in the morning, group discussions on various current issues, lectures, and evening drills. The participants from Kanyakumari to Kashmir and Gujarat to Manipur brave the hot weather and sunburns of Nagpur to acquaint them with the techniques of the organization so that they can become vehicles of its horizontal and vertical growth.

Yes. We are talking about the ongoing summer training camp of Rashtriya Swayamsevak Sangh (RSS) in Nagpur- the fountainhead of the largest Hindu organization of the world. This particular camp at Nagpur is all the more important because it is the graduating pedestal for its committed and dedicated activists. Those who have completed first two years’ training in the RSS are allowed for this Third Year training camp at Nagpur.

The selected swayamsevaks from various states of India come to stay at Nagpur for a period of 25 days and receive training in RSS doctrines and ideology and techniques. The camp is held in Reshambag area where the ‘Samadhi’ of RSS founder Dr Hedgewar and memorial of his immediate successor Sri Golwalkar Guruji is located.

This tradition of summer training camp has a unique place in RSS history and growth. This tradition is continuing for the last 85 years in the 90-year history of RSS barring the years when the RSS was banned in 1948 following the murder of the Mahatma and in 1975 during the internal emergency declared by Indira Gandhi.

RSS is not new to the people now-a-days. It is everywhere in the news, discussions and debates. Especially in the recent days after the BJP-led NDA Government under Narendra Modi came to power, RSS is more in the news and public discourse. The media try to bring it in any discussion, and the politicians attempt to drag it and embroil it in any controversy they lay their hands on. But they are yet to get success in their attempts to malign the RSS. On the other hand the common people have felt more and more assured with the growing influence of RSS in various spheres of national and social life.

And all the credit for this goes to those thousands of swayamsevaks trained in these camps, who with dedication and commitment serve the society in the most selfless manner. That is why these training camps occupy the most important place in the RSS plans and programs.

The swayamsevaks are the very backbone of RSS. They are instrumental in spreading the work and fulfilling the mission of Sangh under the guidance of their respective adhikaris or pracharaks. Dr Hedgewar, the founder understood this very well. Thus, to mould the sterling leadership of the future, he introduced the concept of summer training camps for the RSS swayamsevkas as early as 1927.

That was convenient also. For, most of the swayamsevaks were students and have long summer vacations. So, in the beginning the training camp was designed for 40 days from May 1 to June 10 from morning 5 to 9 in the evening. Initially this camp was known as ‘Summer Camp’. Later it was known as “Officers’ Training Camp” (OTC) as the camps were perceived to be training classes to mould capable RSS officers who would carry forward the mission of RSS towards its goal. After 1950, these OTCs were replaced by more indigenous nomenclature “Sangh Shiksha Varg” (SSV). But the older swayamsevaks are still more familiar with OTC than SSV.

In the initial days more stress was laid on military drills and physical exercises for imbibing discipline. The orders were mostly in English. These drills were displayed during the public functions of the Sangh and would leave a deeper impact on the public psyche then. The founder Dr Hedgewar once explained the objective of this camp. He said: “This is a special kind of training. We conduct these camps to create specially qualified activists who would carry forward the Sangh work. Our aim is to create an activist who would understand the vision of RSS and dedicate maximum time for Sangh with deep commitment for mission and an attitude to mix in the society while doing Sangh work.”

The English orders were gradually replaced by the indigenous orders by 1939-40. As the Sangh work progressed and spread to other regions another such training camp was started in Pune in 1935. The timing for Pune camp was from April 22 to June 2 and Dr Hedgewar used to stay in that camp up to May 15 and afterwards in the Nagpur camp. He would personally meet each and every swayamsevak and establish with him most cordial relations inspiring him to devote time and energy for the Sangh work. In 1938, one such camp was held at Lahore.

According to a very senior RSS worker late B N Wardpande, these 40-day camps used to have entertainment programs every Saturday and a weekly off on each Sunday. Later these weekly offs were curtailed and the overall period of the training camp was reduced to 30 days and to 25 days in the recent past.

Initially, the selection process for the participants was through the respective shakhas. After some time selected students were sent to neighboring villages to start the RSS shakha during the summer vacation which began in April. They would stay there for a month, start a shakha and identify some newcomers who could take up the responsibility later and bring them to the camp. The syllabus was divided into three-year course. The first two year training is given at the respective provinces and the third year training is planned at Nagpur only.

Nagpur has a unique place and importance in the history of RSS. The RSS was founded here in Nagpur by Dr Hedgewar. Initially, all the prominent Sangh workers from Nagpur fanned out to various provinces and established the Sangh thought firmly in their respective areas of operation. The Reshambag premise which is known as ‘Karmabhumi’ of Dr Hedgewar now sports a full-fledged training centre with all modern facilities. The ‘Samadhi’ of Dr Hedgewar, his ‘Smruti Mandir’ and memorial of Sri Guruji is also located at this place. As such this is the land of inspiration for all the swayamsevaks. Hence, the Third Year Sangh Shiksha Varg is held essentially at Nagpur only.

The Third Year SSV at Nagpur is unique in many ways. The swayamsevaks come from different provinces of the country thus presenting a miniature India with all its inherent diversities and underlying principle of unity. They speak different languages, dress differently and have different food habits. But stay together as brethrens; communicate in broken Hindi, try to learn each-other’s languages and foster unbreakable friendship and bonds of love and affection. This year there are participants who speak as many as 16 different tongues! They bear all the expenses of the camp including 25-days food, travelling, uniform etc.

As the RSS work spread to new areas bringing in its ambit senior members of the society, the RSS leadership thought of starting separate camps for them. Thus an idea of separate camp for swayamsevaks between the age group of 40-60 materialized. Such camps are held at an interval of two years. More stress in laid on ideological and philosophical indoctrination besides in-depth training in sewa, prachar, gram vikas and disaster management program. The services of such trained senor swayamsevaks are utilized mostly in the multi-faceted service projects run by RSS and its affiliates countrywide.

The syllabus for these camps also underwent changes according to changing needs. The initial stress on more physical exercises has given way to yoga and unarmed combat techniques called ‘Niyuddh’ in RSS parlance. The most topical subjects like disaster management, prachar, service activities and rural development and bio-farming are added to the syllabus.

There is a selection process for the first year training camp too. In order to sift suitable candidates for this camp a primary training camp is held for a week’s duration. The number of participants in these primary camps or ‘prathmik shiksha varg’ (PSV) has also shown an encouraging upward movement. It is from these camps the first year trainees are selected finally.

Each camp has a ‘Sarvadhikari’ who represents the Sarsanghchalak. This year (2015 ) Sri Govind Singh Tank of Chittore is the Sarvadhikari of Nagpur camp while Yashvant Bhai Chaudhary of Gujarat is Karyawah. Senior RSS functionary Arun Kumar is the ‘Guardian’ (Palak Adhikari) of the camp.

RSS has its avowed mission to take this country to the highest pinnacle of glory. Swayamsevak is the instrument in achieving this goal and shakha is the way. To make this instrument more effective and capable to fulfil this mission such camps are held. The Prime Minister, who had gone through the rigors of RSS training has defined this mission in a most beautiful sentence of “Sab ka Saath—Sab ka Vikas”. The RSS swayamsevaks have fanned out to the every nook and corner of the country through the network of more than 1.5 lakh service projects awakening the tribals, Dalits, oppressed and exploited lots of the society to enlist their participation and role in fulfilment of its mission. The SSVs are part of the ongoing ‘Sadhana’ towards achievement of national reconstruction mission of RSS. 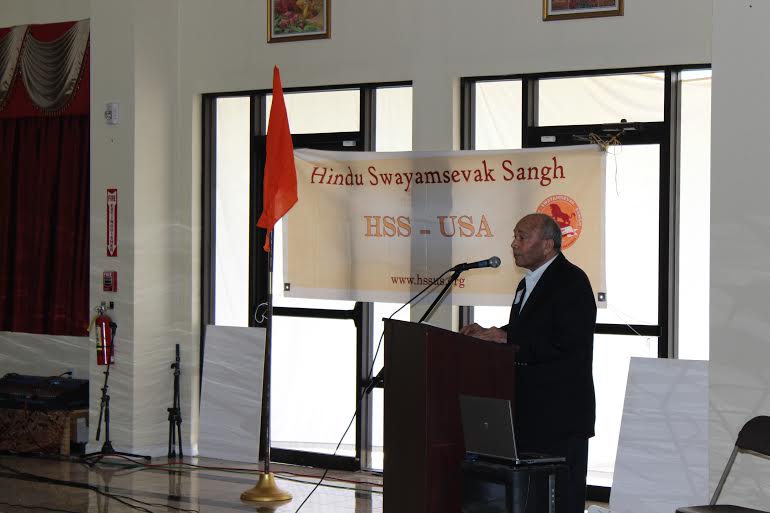