New Delhi May 21, 2015:  In a joint press conference at New Delhi,  RSS inspired seva organisations Rashtriya Sewa Bharti’s national President Surya Prakash Tonk, Sewa International’s Samyojak Shyam Parande said The killer earthquake in Nepal devastated the neighboring country Nepal on 25th April 2015, killing more than 15000 people, destroying thousands of houses, and causing unfathomable loss to life and property in Nepal. It is indeed painful for a country with 2 crore population to bear the brunt of such a magnitude. Bharat and Nepal share millennia old cultural, historical and social relationship and it was quite natural for Bharat to extend a timely helping hand in toughest moment of Nepal. People across all states of Bharat, rising to the occasion, collected relief material to be handed over to Rashtriya Sewa Bharati on massive scale. The relief activity in Nepal is spearheaded by Hindu Swayamsevak Sangh Nepal and 6 other organizations which launched rescue and relief activity within 3hours of the catastrophe. More than 1600 Swayamsevaks of HSS and other organizations were pressed into the relief activity across all the affected districts of Nepal. The other organizations working together with HSS in Nepal are Jan Kalyan Pratishthan Nepal, Pashupati Shiksha Samiti, Pragyik Vidyarthi Parishad Nepal, Vishwa Hindu Parishad Nepal, Janjati Kalyan Parishad Nepal and Sewa International Nepal

The affinity for the neighboring country was expressed through the constant stream of calls and offering the material help with all kinds of relief material. The earthquake affected population needed food and some temporary shelter immediately and Rashtriya Sewa Bharati moved the required material within 3 days of the earthquake. It is worth mentioning here some quantities of relief material dispatched from Bharat to Nepal like –

The relief material dispatched to Nepal via Air, railways and roadways till this date weighs more than 200 Metric Tons while 30 Tons of material is yet to be dispatched.

Rashtriya Sewa Bharati thanks the donors and contributors for joining hands for supporting the relief activity in Nepal on large scale and expressing trust on RSB through their contributions, material or money

. Rotary International, Bullion Merchant Association, Brahmakumaries, Shastra University, Bharat Vikas Parishad, Indian Oil Corporation, Gokul Vraj Foundation, Adhirvad Trust, Akhil Bhartiya Vidyarthi Parishad, Vishwa Hindu Parishad and Resident Welfare Associations of Delhi are included in the list of those organizations which support RSB. Many volunteers have expressed their desire to serve in Nepal whom we would inform as and when necessary.

The Swayamsevaks swung into the rescue and relief work just 3 hour after the devastating earthquake which struck Nepal. They started distributing drinking water, rice, Chiwda (beaten rice), snacks and tarpaulins as an immediate relief in many places of Nepal.

Since then the relief material is being distributed for last 3 weeks by in all the 12 badly affected districts of Nepal like Kathmandu, Bhaktapur, Lalitpur, Dhading, Kabhrepalanchok, Nuwakot, Rasuwa, Dolakha, Gorakha, Ramechhap, Sindhupalchok & Lamjung. In some of these districts 90% houses have been destroyed by the earthquake.

The volunteers have tried to reach far flung villages in some of these districts which are located at high altitudes like 10000+ feet to provide relief material to the people in distress. There had been a demand for Tarpaulins for protecting the families from rain/wind/sun and food stuff like rice & yellow gram (Arhar) which are being supplied.

HSS led organizations have successfully deployed more than 1600 Swayamsevaks for the rescue & relief operations till now and have reached more than 350 villages till this date in those 12 districts of Nepal.

Timely valuable guidance by visiting dignitaries like Ma.Dattatreya Hosabale Ji and Shri Sunil Ambekar Ji, who spent 5 days in Nepal and even participated in relief, boosted the moral of all Swayamsevaks and oriented the activity in appropriate direction for serving the quake affected.

HSS Nepal appreciates the support and cooperation of many local organizations from various towns & villages of abovementioned districts in considerable strength in the relief operation. HSS appreciates the role of Indian Embassy in Kathmandu for providing round the clock services to the earthquake affected in Nepal which is appropriate. HSS will also thanks team of Doctors from Arogya Bharati, National Medicos Organization and many individual groups who joined the relief with medicines and medical kits that have saved many lives. 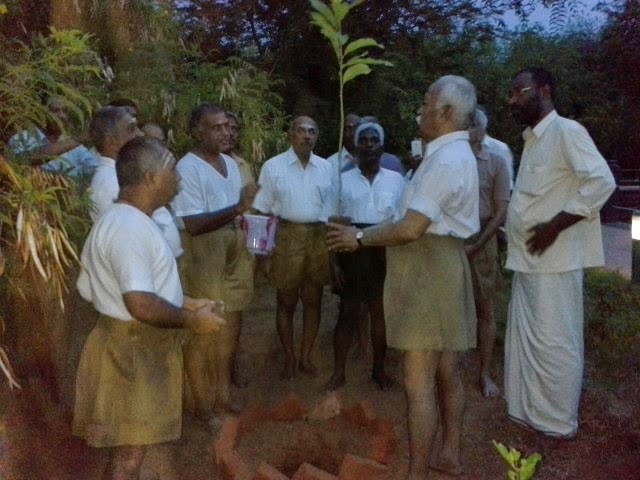