By a dictatorial fascist order, the Karnataka Govt banned the entry of Dr Pravin Togadia into Bengaluru City. He, however, conveyed VHP’s commitment to Hindu Well-being. According to him, VHP will focus on eradicating untouchability from all aspects of life in Bharat. Specific programmes for this will be: ‘Hindu Family Friend’ campaign in which every Hindu will make another Hindu family from SC / ST a friend. These 2 families will celebrate all occasions together, share meals together & stand by each other in thick & thin. VHP also resolves to inculcate among public the need for ONE water well, ONE & the same Crematorium for all & entry of all in the temples in all villages / towns etc.

For Hindu Prosperity, Dr Togadia explained VHP’s concept & programmes. These are: Every Hindu should get food. For this, every Hindu should daily take out at least 1 fistful of food-grains (Ek Mutthi Anaj) which the family will donate to the poor so NO Hindu will stay hungry ever. Prosperity does not come without Education. Every Hindu will take out Rs 1 to Rs 100 daily to help poor kids get proper education. Wealthy families will ‘adopt’ the education costs of at least 1 to 10 poor / Tribal kid’s education. For Employment / Self Reliance, every Hindu trader / Businessman will pledge that he will employ at least 1 to 10 Hindus in his Trade / Industry so that every Hindu youth will have work. Businessmen / Traders have assured VHP that they would train youth in small trades & support businesses so that they will be self-reliant. In Health for all, the programme is that every Doctor will examine / advise at least one poor patient FREE daily. Over 20,000 Specialist Doctors have already been associated with the programme so that no Hindu will lose life because of lack of medical treatment / medicines / blood. For Blood in emergencies, a mobile App ‘Blood4India’ has already been launched where donors & patients can register.

Hindu Safety has been a matter for concern in the changing times. VHP has time & again run various awareness campaigns all Bharat re Terror threats, how to inform the local authorities & police if they feel something suspicious. VHP’s women’s wing has been running special camps to train girls & women in self-defense.

VHP feels that if all these aspects are taken care of then Hindu Dignity will not only be sustained but the nation also will progress & prosper to be the world leader in trade, agriculture, education, technology & science. VHP’s continued commitment for other issues related to Hindu Dignity, such as abrogation of article 370, grand Ram temple at Ayodhya, national law banning cow slaughter & Uniform Civil Code too were reiterated as the continued commitment.  He thanked RSS Sarkaryavah ji Ma. Shri Bhaiyyaji Joshi for his inspired guidance at the Hindu Samajotsava & in the continued programmes.

'No Hindu without Bharat and No Bharat without Hindus': Bhaiyyaji Joshi at Hindu Samajotsav Bengaluru 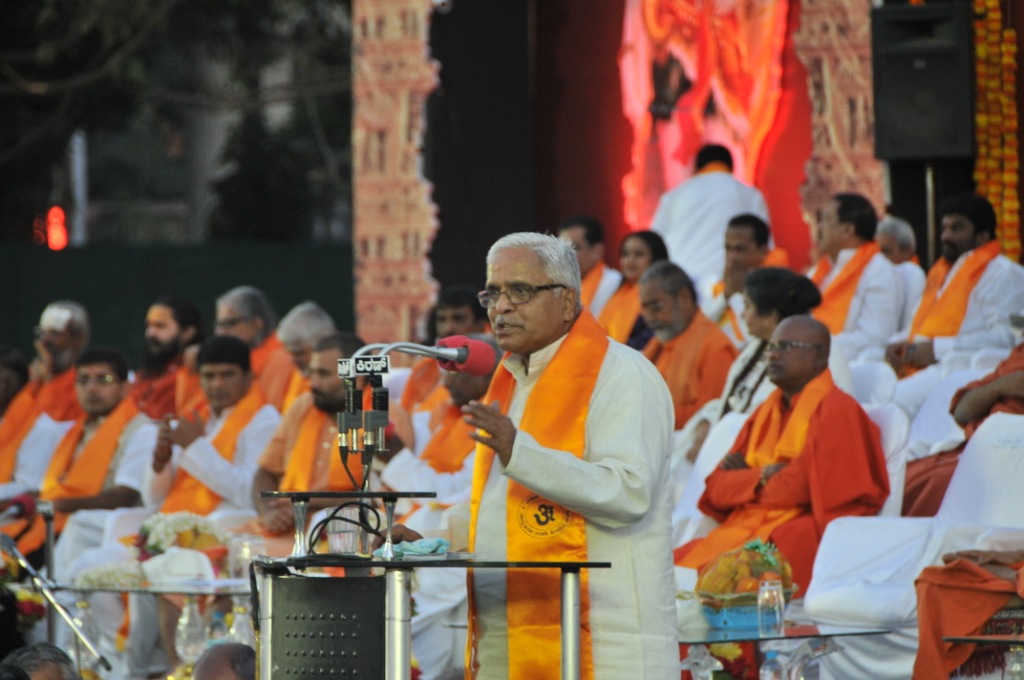