Karnataka Chief Minister Siddaramaiah had announced last month that his government will celebrate Tippu Jayanti every year on November 10. Sanghparivar organisations including VHP, Bajarangadal, Hindu Jagarana Vedike, others were protesting against the birthday celebrations of Tippu Sultan which were planned by Goverment of Karnataka

A local VHP functionary of Madikeri said “There were around 100 people from VHP, who were silently protesting at Thimmaiah circle. Suddenly a mob came in many vehicles, most of them who came seems to be from Kerala. Police were aware of it. Though VHP workers requested police not to allow people in vehicles, police allowed them. They came from Mangalore road, Virajpet Road and Mysore Road. Rally entered the circle from 3 roads. While coming they simply attacked the innocent protestors whomever they saw. A stone hit Kuttappa and he was deeply injured and died in hospital. Vehicles came from Kerala and there were around 2-3 thousand people in the rally. Many cars and lorries with KL registration were seen. Some suspect that local illegal Bangaldeshi labours were also made pat of the rally. SDPI and PFI workers are suspected behind this attack.

“VHP people were not violent at all. They were small in number and were silent.”, he added.

67 year old DS Kuttappa was a retired state government employee, retired from Horticulture department. He was socially active, was serving as secretary for VHP Kodagu district.

We condemn the brutal killing of a peacefully protesting Hindu in Madikeri by an anti-national mob in broad day light. Now where are those who shout when Dadri incident happens? Not Hindus but those who glorify Islamic invaders in Bharat are intolerant. Peaceful protesters are called “intolerant”! Those who celebrate jayantis etc of invaders r insulting Bharat & Bharat’s culture. We appeal all to maintain peace & we also appeal Karnatak Gvt & central govt to protect all citizens & once for all refrain from terming Bharatiyas as “intolerant”. – Dr Pravin Togadia

RSS had clearly opposed the celebrations of Tippu Sultan, claiminng him as an “Intolerant King”. RSS Kshetreeya Sanghachalak V Nagaraj has stated as follows.

Tippu Sultan was a bigot and intolerant ruler. Celebrating his Jayanti is as cruel an act as his attrocities : RSS functionary V Nagaraj

Wed Nov 11 , 2015
Bengaluru Nov 11: VHP, along with other like minded organisations staged massive protest on Wednesday at Shivamogga, Bengaluru and ther places of Karnataka condemning the killing of VHP activist DS Kuttappa in who was protesting against Tippu Jayanti at Kodagu yesterday. email facebook twitter google+ WhatsApp 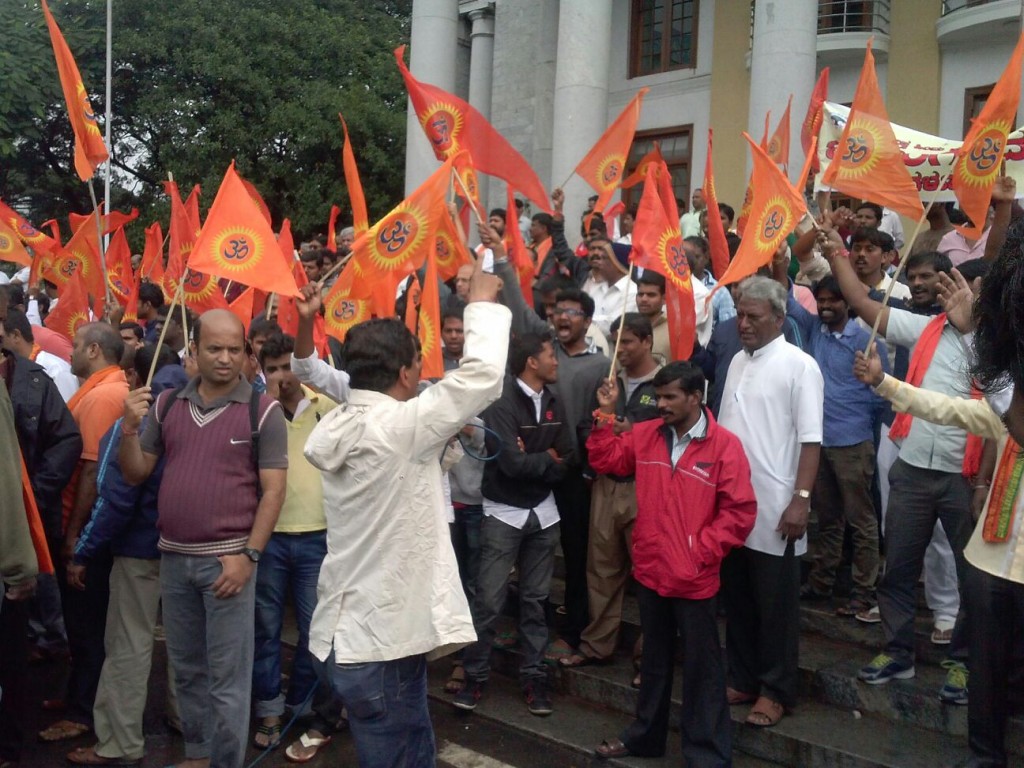