Basavanagudi, Bengaluru March 21: ‘Dr Keshav Baliram Hedgewar who once was an active socio-political leader of Nagpur, came out of the then Congress, did a kind of SWOT (Strength-Weakness-Opportunities-Threat )analysis of the Hindu Society. This society itself should understand and realise the problems and should find the suitable answer for them. To make such a self-thinking society, each individual should be filled with morals and character, Dr Hedgewar founded RSS in 1925. Since its genesis, RSSS focussed on Vyaktinirman, and today RSS has reached all walks of social life widening the horizons’ said V Nagaraj, Kshetreeya Sanghachalak of RSS at Basavanagudi in Bengaluru.

V Nagaraj said; “We meet every year on Ugadi. Ugadi is a festival of happiness and gaiety, moreso because Ugadi also signals the beginning of a new season in nature. We celebrate two Ugadi’s, Sauryamana and Chandraman, based on the position of the Sun and the Moon. Celebrating Ugadi hence also has a celestial reason to it. We are proud of this scientific background of this festival. This is our tradition of reason and science.”

“Unlike other new year celebrations, in Ugadi we do not forget ourselves in celebrations alone but take it as an opportunity to look within and understand that we need to be prepared for both good and bad in life. Despite attacks on us for numerous centuries, it is due to this attitude of looking withing and reasoning that we have survived and fought back. Leading lights have always guided us and time to time led us from the front.” he added.

“The birth of Doctor Ji on this auspicious day is divine providence and our good fortune. Though he was  born in abject proverty and faced difficulties, he never let these affect his work or goals. When Doctor Ji was 8 years old, Queen Victoria’s coronation celebrations was being observed all over India. When sweets were distributed in his school, he threw it to the gutter and said that he would not celebrate the coronation of a alien ruler. This was the strong attitude of a 8 year old boy.” said V Nagaraj

Doctor Ji after initial schooling went to Kolkota to study medicine. Here he came in contact of ‘Anusheelan Samiti’ and got  vin revolutionary activities. He was also focused on his studies and secured his degree in medicine. When he returned to Nagpur, he did not choose to work for himself or in government service. Instead he chose to involve in the freedom movement by joining the Congress.

“Despite the poverty back home, he continued to involve in the freedom movement. Though he was known as a promising and able leader in the Congress and could have grown to heights as a politician, he chose to start Sangh work through a shakha. People were surprised to find him spend time with kids at a shakha instead of taking the promising political career. Many ridiculed him for this move. But Doctor Ji believed that instead of just fighting the foreign forces, we should also work towards solving the problems within our society that enabled the foreigners to rule over us. His goal was to make people aware of these faults in society and be able to sustain the freedom we would get. Practices like untouchability, casteism and lack of nationalistic perspective plagued our people and these had to be addressed. To make this happen each member of the society had to grow individually and then contribute to the society was Doctor Ji’s goal in starting Sangh. This is also what we recite daily in our Sangh prarthana.”

“Swami Vivekananda too dreamt of a nation that is spritually strong and socially united in every aspect. He believed that progress will come when these two aspects are taken care of. Doctor Ji put this in action through Sangh.”

“Lakhs of Swayamsevaks have emerged in the path set by Doctor Ji. Many have given their entire life for Sangh’s work. It is these Karyakartas who work for the cause of the nation in various spheres. This was possible only due to the foresight of Doctor Ji who started Sangh.”

Doctor Ji gave his entire effort, in word and spirit, for the cause of Sangh from 1925 to 1940. This took a toll on his health. Today, in these 90 years Sangh has grown and has served in various spheres. As mentioned in the recently conducted ABPS, today there are 51,000+ shakhas in the country. There are 12,000+ weekly milans. We see positive change in the society and a pro-Hindu sentiment in the country. This is due to the relentless efforts of Sangh. For example, World Yoga Day being observed from this year is an indication of this change. The world is watching us due to these recent changes. Hence we have the responsibility to expand our work in more areas in the society and at a faster pace.

Sangh today is equipped to bring lasting changes in the society. While good work is happening in the society, negative work is also happening which is due to selfishness. Prompt officers are killed and atrocities on women are continuing. This is due to the fact that we have forgotten our traditional values.

“Jeremy Perelman, an reputed scholar from International institute of developmental studies of Sweden, had analysed global problems. As the solutions, he says 3 things which are much needed for the mankind. 1. Moral order, 2. Spiritualism 3. Ethical compass. He suggests that these are much available in Hindu way of life” added Nagaraj explaining the greatness of the Hindu culture in maintaining the social harmony since ancient times.

“We all need to work for the society. I urge every man and women to join in this effort and make Doctor Ji’s dream come true.” said V Nagaraj 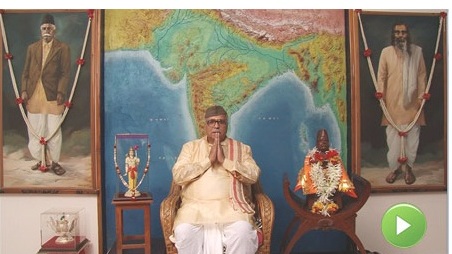