Hubballi February 14, 2016: “The intriguing incident of a Dalit girl in Thrippunithura in Kerala attempting to commit suicide due to unrelenting harassment has sent shock waves ringing across Kerala.The fact that, it was the handiwork of a students organization and its leaders that forced the poor girl to seek the shade of life after death, is a matter of absolute disgrace for the most literate state in India.” said RSS Akhil Bharatiya Prachar Pramukh J Nandakumar.

Nandakumar was addressing a group of social media enthusiasts at Hubballi, Karnataka on Sunday evening.

“It is evident from the death notes of Rohit Vemula, the research student who committed suicide in the Hyderabad University campus that it is the same progressive Students’ organization is behind the recent ruckus in the campus as well. Rohit Vemula had also referred about a former SFI leader and CPM All India Secretary Sitaram Yachuri’s pro-savarnna approaches in his Facebook post.” said Nandakumar.

“The Thrippunithura incident yet again reveals the ‘septic’ lines of thought of the so called progressive students’ union This organization which conspicuously displays the outdated principles and dangerous practice .The thrippunithura incident brings into light the hypocrisy of the organization that blows their own trumpets about themselves being the saviors of the downtrodden.” he added.

“They have no sincerity towards dalit uplift or their educational, financial or social prosperity. The incident of the dalit lady Chitralekha of Payyannur who was attacked by the leftists is another incident of what they’ve ‘left’ Kerala It is high time that the knowledgeable people of Kerala respond to these acts that are firing darts at the very democratic framework of the society” , J Nandakumar said.

To defame ABVP by forged video is a devious act on the part of the Left: VinayBidre

Sun Feb 14 , 2016
New Delhi February 14, 2016: The political atmosphere in the country has been rather disquieting after the arrest of JNU students union president in response of the incident which occurred on 9th February 2016 in the prestigeous institution called JawaharLal University, New Delhi. Vinay Bidre, General Secretary of ABVP , […] 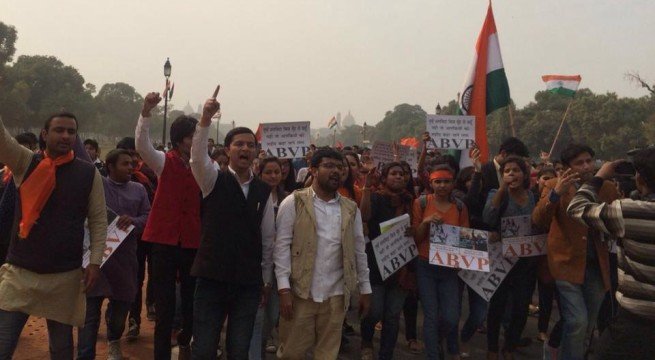