Young Thinkers Meet, as always, is an exhilarating experience. In its fifth year edition this annual meet of select young thinkers from all over the country has certainly matured. (was held on August 6, 7 2016).  As one involved from the conception stage I can say that spending two days with this group would be an enriching experience even for seasoned intellectuals.

Coming from as varied backgrounds as IITs to TISS to Harvard to NLS to regular universities these eighty odd youngsters – around fifteen of them women – bring to table rich and varied, yet remarkably fresh flavour of thoughts. Some participants have RSS-BJP background while some others come from the background of religious missions and institutions. Yet the majority come from what can be described as ‘ideologically neutral’ background.

We chose Patnitop, a picturesque hill station in Jammu region for the meet this year. Participants came from several cities like Chennai, Hyderabad, Bengaluru, Mumbai, Pune, Ahmedabad, Delhi etc. We had a couple of participants from abroad too. The weather was heavenly with rain, mist and thick clouding.

The theme for this two-day meet this year was “Impacting National Discourse”. Sahsarkaryavah of RSS Shri Dattatreya Hosabale, Union Minister Smt. Smriti Irani, Dalit entrepreneur and Chairman, DICCI Shri Milind Kamble etc spoke at the meet. The very structure of the meet allows less time for speeches and more time for interaction and discussion by participants. We had lively discussions on subjects like Mainstream Media, Social Media, Nationalism Discourse in Universities and Academic Institutions, Dalit Discourse etc. About 15 participants made presentations on various issues related to the central theme. It was thrilling to see arguments and counter-arguments flying around in the hall, everything in a most academic and cordial manner. Take home for the young thinkers was to remain open-minded,  co-opt rather than confront, be confident about our own thought but allow space for other thoughts too, confront intellectually rather than condemn every other thought as anti-national and most importantly to remember that diversity of thoughts and ideas is the reality and beauty of life.

While this meet was coming to an end news was flashed on some media channels that back channel initiatives were being launched from Patnitop by the BJP to engage with Kashmiri separatists. It is pure and simple gossip. This meet was an annual affair and the venue was chosen some three months ago.

We did discuss about the J&K situation, with a local leader presenting the details about the situation in the state. I myself talked about the prevailing situation in the Valley and the reasons behind it. This forum was not meant for anything beyond that as far as the Kashmir problem is concerned.

But yes, we are otherwise preoccupied with the Kashmir issue. Several steps are being contemplated and implemented to bring peace and normalcy in the Valley. Both the State and Central governments are actively seized of the matter with Prime Minister and Home Minister directly monitoring the situation.

One message that was conveyed to the young thinkers was that Kashmir is and will always be an integral part of Bharat. When we say Kashmir, it is not just about the land alone, it is the people also. While we deal with terrorists, militants and their overground supporters and sponsors with all the toughness, we must reach out to the ordinary Kashmiris with the reassurance that the entire country is ‘Azad’ for them and cares for them. In this propaganda war the victims shouldn’t be mistaken for perpetrators.

Sun Aug 7 , 2016
​New Delhi August 07, 2016 : RSS Sarakaryavah Suresh Bhaiyyaji Joshi’s statement on ‘Gou-Rakshak’ and few attacks in the name of Cow Protection. RSS Sarakaryavah Suresh Bhaiyyaji Joshi’s statement: Bharat is an agriculture based nation and our cows are the backbone of our agriculture from time immemorial. As the world […] 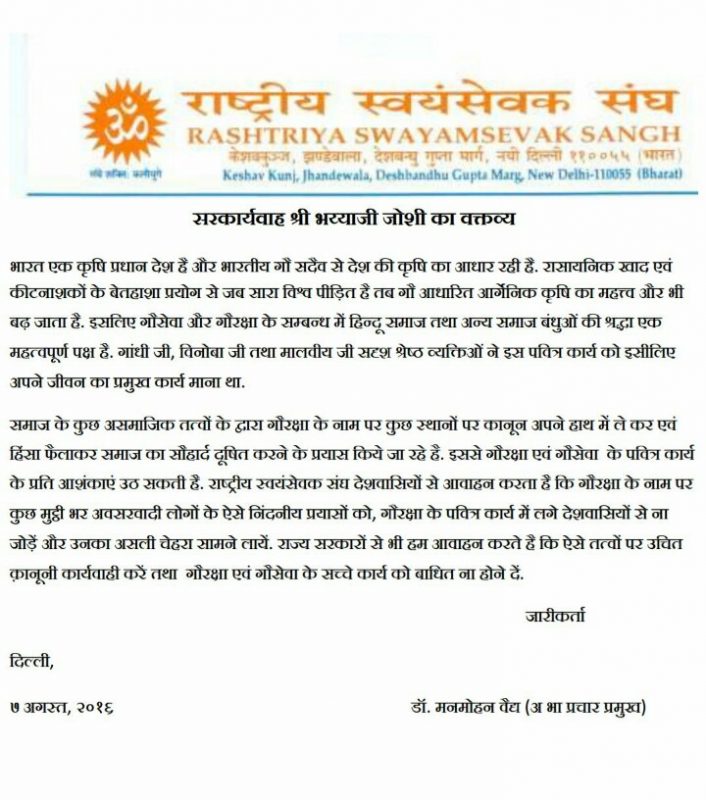