Based on the religious viewpoint, Hindus are those who follow the oldest religion in the world, namely Hinduism. There are more than a billion practicing Hindus in the world, majority of them living in India. Hinduism is well-known for its multiplicity of gods and goddesses, diversity of practices, multitude of religious men and women as well as institutions. Hindu practices, belief systems as well their temples and pilgrimage centres, have attracted global attention for several centuries and more.

For a Hindu, practitioner of such an ancient and immense faith, growing up and living in this modern day and age raises many relevant questions regarding his faith. Especially, in the context of other global religions and cultures which have been dominating the mind space in the last two millennia. Given such a presence of other dominant religions in the global market place, it is perhaps natural that even Hindus and Hinduism are viewed through prisms and attitudes that are alien and extraneous to Hinduism and Hindu worldview.

But, when such points of view about Hinduism become common and mainstream among Hindus themselves, then a confusion or a feeling of discomfort arises. What are the major questions facing Hindus today and how should a Hindu go about answering these questions? Should it be based on a template borrowed from other cultures and belief systems, simply because those have the most dominant and visible presence in the market place? Can such an approach yield correct answers for Hindus? Is there a difference between a Hindu understanding his or her faith versus others expressing their points of view on Hinduism from outside?

Hindol Sengupta, in his book Being Hindu – Old Faith, New World and You, has attempted to answer some of the relevant questions for a Hindu from a Hindu standpoint, rather than fall back upon the borrowed template offered by much of the West-inspired punditry and scholarship on Hinduism and Hindus, many if not most of it by those who don’t consider themselves Hindus. It is an honest attempt to share the findings of a personal journey as a Hindu in understanding his own religion and cultural identity.

The book attempts to answer ten questions. But, before that, the context for the book is as follows.

The author grew up in Kolkata, in the eighties and nineties. His grandparents were originally from previous East Bengal, presently Bangladesh and fled to post-independent India after 1947. He studied in the Assembly of God Church School where-in he was regularly receiving information that pointed to or posited that Christianity was the superior religion and that all people are sinners who can only be saved by Christ etc.

At home, his parents came from a generation that suffered and lost enormously from the bloody partition of Bengal when Pakistan was formed. They were also followers of Shri Ramakrishna Paramahamsa. They were staunch Hindus. So, the author faced two diametrically opposing influences in terms of religion and belief systems as he grew up.

During this time, naturally, several questions arose in his mind regarding his religion and religious identity. When the terrorist attacks happened in New York on Sep 11, 2001, he decided to write a book on Hindus and Hinduism, as he felt strongly a need to write about Hinduism’s pluralistic character and its emphasis on inclusive harmony and unity of all beings.

The ten questions that are in focus in the book range from fundamental ones such as, Who is a Hindu?, What Makes you a Hindu?, and What is the One True God, to more contemporary ones such as, Is God afraid of science, How does Hinduism fit in the Digital Age and finally the big question, Why should we Re-examine Hindu Way?

Before asking these questions, the author starts by commenting on the typical interpretation of Hinduism that is obtained by mostly western scholars and authors, most of which is prejudiced towards post-Christian beliefs and ideas and follows a stereotyped, sensationalized and even gross view of Hindu ideas and practices.

Without giving away the answers and discussions in the book, a ring-side view of its contents can be revealed by reviewing the following quotes from the book:

“If this exploration reveals some aspects of Hinduism…., helping someone else understand, I would naturally be delighted”

“I have always been fascinated by many of the curious beliefs about Hinduism…, almost all unrecognizable to practising Hindus like me”

“The universe that we see is really what we are within”

“How could man understand himself, without first understanding God?”

“Gayathri Mantra is a prayer for illumination…., for that intelligence that is eternally enlightening”

“You and me, we are not sinners. We are the divine. We just don’t know it yet”

“Hindus fundamentally believe that there is no one true God”

“Says Atharva Veda…., Let everything be at peace and in peace. Only then we can find peace.” “But there is no peace to be found in most Hindu temples”

“If you think about it, it is the Vedanta that is seeking the same ends as the future of science; how do we arrive at unity?”

“What we have not yet managed is a seamless, everyday way for everyone to access the answers..”

“How do you begin? By understanding that if you are going to stand naked on a cliff, enjoy the view and remember that it is all part of you”

Hindol Sengupta’s book ‘Being Hindu’ is a welcome addition to the list of recent books on Hinduism, Hindus and related topics, including those by Sanjeev Sanyal, Amish Tripathi, Rajiv Malhotra, Vamsi Juluri, among others. It can and should inspire and motivate fellow Hindus to examine and express about their own journey and experience as Hindus and figure out how to deal with the questions posed on their faith by other cultures and points of view.

In a world suffering from fundamentalist ideologies trying to gain dominance, the need of the hour is perhaps a reiteration and revalidation by Hindus themselves, of the central ideas of Hindu thought that celebrate diversity and pluralism while venerating the cosmic unity of beings. ‘Being Hindu’, is an excellent attempt in that regard and hence is worth reading by all Hindus, especially the youth and those interested in Hinduism.

'BEING HINDU' Book opens the gates of intellectual, philosophical and spiritual pursuit of Hindutva: RSS's Dattatreya Hosabale at Bengaluru

Wed Feb 10 , 2016
Bengaluru February 09: RSS Sahsarakaryavah Dattatreya Hosabale launched the book “Being Hidnu – Old Faith, New World and You” a book written by Hindol Sengupta  on Tuesday evening at Bengaluru. The event wass organised by Manthana Bengaluru at Banquet Hall  of Hotel Goldflinch, Bengaluru.  The Book BEING HINDU and the author Hindol Sengupta […] 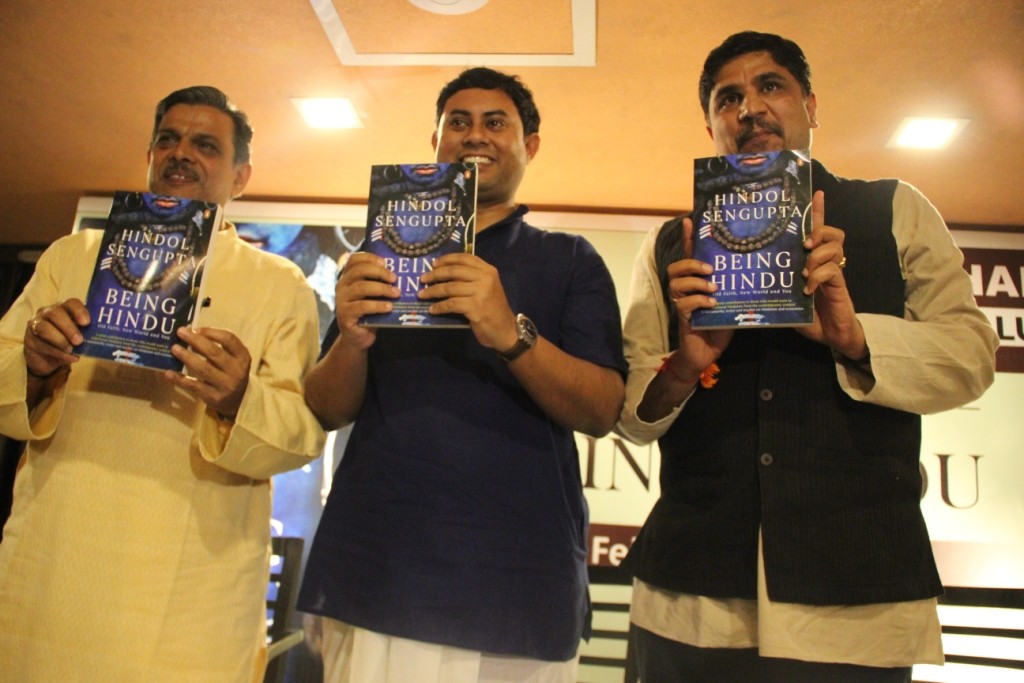