The gruesome killig of our dear swayamsevak Sri Ramith by the CPM goons on 12-10-2016 near his home at Pinarayi was a really shock to all the karyakarthas and swayamsevaks of our District.  He was killed while he was going to buy medicines for his niece.  Ramith was attacked by a member of trained CPM goons who attacked him initially with iron rods and thereafter with daggers and swords.  He was declared dead at hospital.  He was the sole backbone of his family consisting of his mother and sister. He was just 26 years old.  Ramith’s house belonged to Pinrayi Panchayath, the place of Chief Minister of Kerala Pinarai Vijayan.

The attempts to kill Ramith were planned long back.  Immediately after the election results, his house were attacked on 19-May-2016 and his mother were threatened by saying that son Remith will be killed.  Prior to that, on two occasions wreaths were laid in front his house, in order to threaten him with dire consequences in the event his association with our activities.  The entire family was socially boycotted by the party leaders and openly declared that the family of Uthaman will not be allowed to have a decent living at Pinarayi.  Shop owners were instructed to keep away from the family of Ramith.  It is not a tit for tat, as painted now by the media, but a pre-planned murder carried out as instructed by the party leadership.

The father of Ramith, Sri Uthaman happened to be our strong worker who was instrumental in raising nationalist organizations around his place namely Chavassery near Mattanur, which was once a CPM stronghold.  He was in the forefront in questioning the atrocities created by CPM and acted as a backbone for our activities till his last breath.  His activities proved dear for CPM, as hordes of CPM men started flocking towards Sangh in legions and this caused vengeance in the hearts of CPM leadership.  He was a bus driver by profession.   He was killed on May 22, 2002, on broad day light on stopping his bus after throwing bombs, while the bus was heading to Irity. He was in the driver’s seat while he was hacked to death.  He was attacked with swords and he died at the spot.    Just like the warnings made on the life of Ramith, Sri Uthaman was also threatened by District leaders of CPM. In many public meetings, it was openly declared that Sri Uthaman will be killed.  The selected goons were brought together and interestingly some Islamic men were also involved in his killing.  On the next day, on 23-May-2016, after attending his cremation, while they were returning a jeep was attacked by throwing bombs on it and an aged mother, Ammu Amma was thrown out of the vehicle and even on witnessing an aged mother begging for her life, folding her hands, bombs were thrown on the chest of Ammu Amma.  The driver of jeep namely, Shihab and Ammu Amma were seriously injured in bomb attack and they succumbed to the injuries on the same day.

In the killing of Sri Uthaman, the role of Sri Uthaman Jihadi angle was evident, now as the names of assailants in the killing of Remith is coming out, there appears an apparent role of Jihadi elements who are successful in reaching the strategic centres of CPM.  It is learnt that one Raheem, a dreaded criminal with jihadi background was the man instrumental behind the killing of Remith.  Earlier also Raheem had intimidated Remith while he had gone buy provisions. Raheem and his younger brother were instrumental in the attacks made on several homes on 19-05-2016.    The deadly cocktail combination of Marxist-Jihadi nexus is now crystal clear and has to be taken care of with utmost care and consideration. 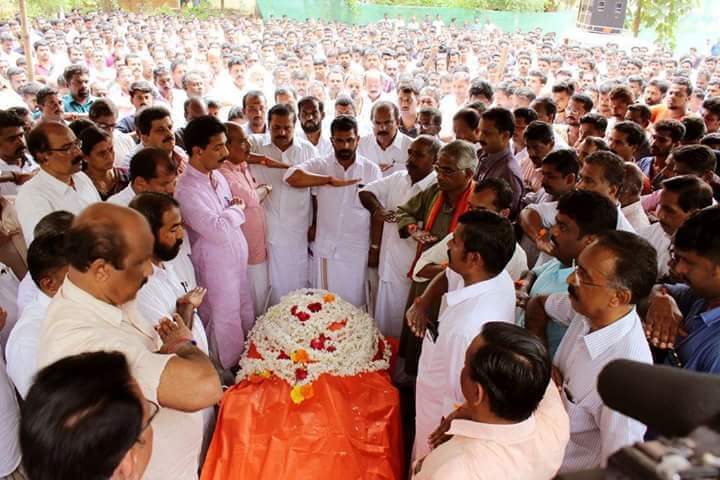