Bengaluru June 2, 2016: “Assam’s future is totally secured in the leadership of Nationalistic Ideology, The Assam election results have secured the future of the state. A victory in a state like Assam means more to nationalists across the country” said Ram Madhav in Bengaluru’ BJP General Secretary and chief architect of BJP’s leaping victory in recent Assam elections, Ram Madhav was addressing a large gathering at the RV Teachers’ College Auditorium in Bengaluru, on the topic “The Assam Triumph” in a programme organised by Manthana, Bengaluru.

Summary of Speech by Ram Madhav:

“We must pay homage to those killed in Jihadi attacks in Dhaka, Istanbul and other places. Islamic terrorists have not spared innocent people even during their holy month of Ramzan. But we are happy that Muslim leaders have started to condemn such attacks. From the Chief Minister of J&K, Mehbooba Mufti to the Prime Minister of Bangaldesh Sheikh Hasina, many leaders are standing up and speaking against the violence. Under the leadership of our Prime Minister, Narendra Modi, we resolve not to allow space for such entities in our country or outside.

The victory in Assam came at the right time – on the occasion of the 2nd anniversary of the Modi Government. It is a great morale booster for the BJP. But all victories are equal and some are more equal. A victory in a state like Assam means more to nationalists across the country.

Until now, not a single year has passed without a resolution by the RSS regarding the North East, the insurgency and infiltration there which causes danger to national integrity. Two states are very important in the national discourse – Jammu & Kashmir and Assam. Hence, celebrations over the victory in Assam and Jammu & Kashmir are also different. The BJP is an integral part of the nationalist movement and hence this discussion. The Victory of Assam:

The NDA alliance garnered 86 of 126 seats in Assam, leading to a stupendous victory. Even if the Congress and the UDF (led by Badruddin Ajmal) had formed an alliance and even if there were 100% transfer of votes as happens between allying parties, the BJP would have still won a majority with 69 seats.

The BJP won 60 seats on its own in the 89 seats it had contested. In 30 seats, 60-95% of the electorate were either Muslim infiltrators from Bangladesh or local Muslims. Of these, the BJP won 11 seats which indicates that people voted for the BJP as they believed in its promise of all-inclusive development. Some seats were lost by meager margins of <1500 votes while many seats were won with huge margins. In the Lok Sabha elections, the BJP got a vote share of 37% and in the Assembly elections, the BJP got a vote share of 43%.

This was possible because of the nationalist government in the Centre led by the hugely popular and capable leader, Narendra Modi, which was of great benefit to Assam. The other advantage was the low-profile campaign of the BJP. While Gogoi’s campaign was focused on irrelevant narratives like intolerance, 2002 riots, cow-slaughter and caricaturing of the Prime Minister, the BJP focused entirely on Gogoi. Local leaders were stakeholders in the campaign and were empowered to handle it. Thus there was local ownership of the election campaign and there was great team effort among all the local leaders and cadre.

Beyond that, there are three other significant considerations to the elections and its outcome.

Firstly, for the people, it was the last chance for a change as the demographic change was worrisome given that there are 1 crore infiltrators in a population of 3 crores. Their identity, culture, traditions, satras, Kamakhya and Shankaradeva’s traditions, tribal traditions, were in grave danger. With this victory, the identity of the Assamese has been secured at a crucial juncture. Therefore, the victory was dedicated to Maa Kamakhya. After 15 years of Congress rule, the energy of the state was sapped. The people had to migrate to other states for education, jobs etc.. The Human Development Indices show that the state is the 4th least developed state. The BJP will now ensure the promised development to the state.

The important regional message for Congress Mukt Bharat which was declared as a goal by Narendra Modi, was sent through the formation of the North East Democratic Alliance (NEDA), which is an alliance of non-Congress parties in the North Eastern states. Until now, the North East was inaccessible to nationalist forces but through the grand entry into Assam, access is now possible. Ruling parties in Sikkim, Nagaland, Arunachal Pradesh, powerful parties in Meghalaya, Mizoram, Manipur, some of which were formerly inclined to separatists, are part of the NEDA. The NEDA is not just a political alliance but a nationalistic alliance.

The primary concerns of the people were the problem of infiltrators and lack of development. The Congress used infiltrators as vote banks and hence refused to acknowledge the problem. The BJP promised to seal the border as soon as it came to power. The border is difficult and it has many rivers which keep changing course. With initiative from the Modi government, India and Bangladesh have signed the Land Border Agreement. By the end of 2016, we are committed to fence the entire border and to implement joint patrolling by the 2 countries. As a prelude to this, a Central team from the Home Ministry has visited Assam and conducted a survey. Meanwhile, screening and registering of citizens to the National Registry of Citizens is in progress, and monitored by the Supreme Court.

Secondly, the victory has secured the issue of national integration as the BJP and its alliances (AGP, BPF) are on the same page.

Thirdly, the North East is a gateway to South East Asia, a region that is of strategic importance to the Look East Policy of the present NDA Government. Assam has as many as 5 countries as neighbours and its development will contribute significantly to the Look East policy. By developing the North East and providing infrastructure to connect to South East Asia, the potential for trade and connectivity will increase phenomenally. This connectivity will transform North East India. Already, there is increased connectivity between India and Bangladesh, thanks to the initiatives of the Modi government.

The Assam results have secured the future of the state. Similarly, the future of Jammu & Kashmir has been secured by the alliance between PDP and BJP. Despite differences in ideology and prevalent skepticism, the two parties in J&K have come together after intense negotiation, to provide much needed development to the state. In the past, socialist leaders like Ram Manohar Lohia came together with Jan Sangh leaders like Deendayal Upadhyay. Many people accused Lohia of selling himself out to communalists. But Parampujya Guruji said that the RSS thought of this in a different way. He said that the RSS felt that Deendayal Upadhyay would make Lohia a nationalist. This was the difference in thinking and attitude of the RSS which believed in trusting, giving space and time for something to yield results.

We have a government in J&K that is committed to development and equally to unity & integrity of India. Recently, Mehbooba Mufti stood up to condemn Islamic terrorists. Changes are slowly but steadily happening. The government in J&K in on the right track. The day we are convinced it is not on the right track, we will quit the government. But we are confident that we will complete our term of 6 years successfully and fulfill all promises. It is the same with Assam.

In Assam, borders will be sealed and Constitutional and legal steps will be taken to ensure that infiltration does not take place. We thank the people of Assam for reposing enormous faith in us. Even in urban places, where voting percentages are usually low, in Assam the voter turnout was very high; Guwahati recorded 87%. We also assure the people of Assam that the 2 main commitments will be honored – that of securing the identity, culture and traditions of Assam and all-round development.”

Asnwering questions from the audience, Sri.Ram Madhav made these points – 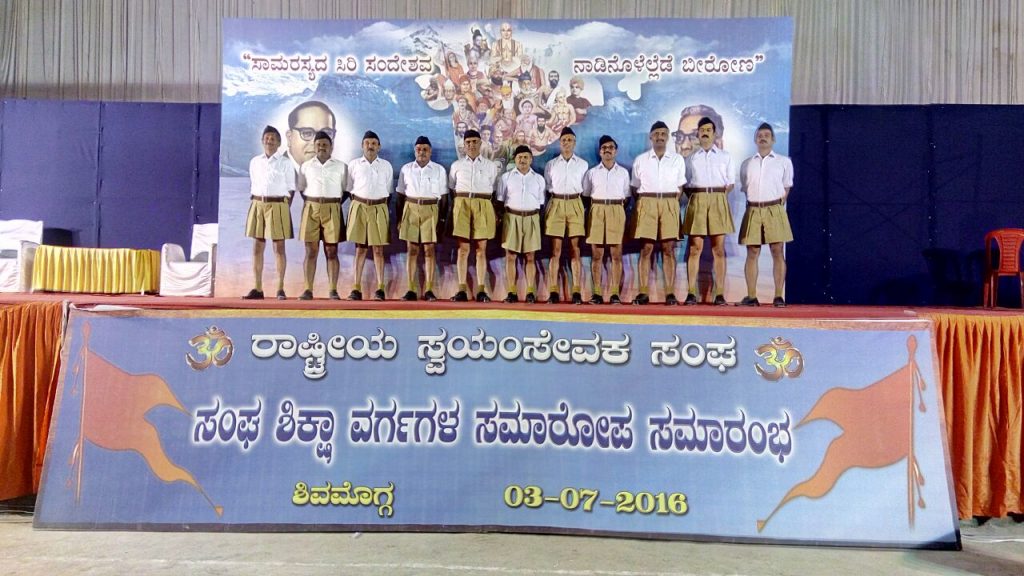