Hyderabad October 24, 2016:  “Communist Violence in Kerala is highly increased after Left Democratic Front formed government Kerala.  The state of Kerala is going through a turbulent phase of violence based on intolerance by the CPM against groups that they perceive to be opposed to them.” said J Nandakumar, RSS Akhil Bharatiya Sah Prachar Pramukh. Here is the brief summary of Press Interaction by J Nandakumar.

As far as CPM is concerned, Kerala is their sole area of influence in the whole country. During the 60’s, they were dreaming of taking over the nation. Their famous slogan was “After Nehru, EMS !” Over the last 6 decades, CPM has lost each of their bastions including Bengal due to their anti-people stand, arrogance of their leaders, intolerance and hate politics that they followed. Inspite of this, they are continue to tread the same path of intolerance in Kerala.

It was in 1940’s that the Rashtreeya Swayamsevak Sangh started its work in Kerala. Initially communist approach towards Sangh was in a contemptuous manner. Slogan raised by them was that Malayale mind will not accept Sangh ideology.  But when they found that Sangh ideology started making inroads in communist strong holds they started becoming intolerant towards Sangh also.

The first victim was SriVadikkal Ramakrishnan, a tailor by profession, the Mukhya Shikshak of Thalassery Shakha of RSS, who was brutally murdered in broad day light on 28.04.1969 while he was working from his small tailoring shop.  The accused No.1 in that case was none other than the present Chief Minister of Kerala, Sri. Pinarayi Vijayan, and the accused No.2 was Raju Master who is the father-in law of Sri.Kodiyeri Balakrishnan, the present State Secretary of CPI(M).  But they were able to get an acquittal from the court on the reason of benefit of doubt because of the poor investigation of the case conducted by the local police.

Sri. C.K.Ramachandran, who was a B.M.S functionary, an auto driver of Payyannur in Kannur was killed inside his house on 11.07.2016 in the presence of his wife and children.  On 03.09.2016 Sri. Vineesh, a swayamsevak of Thillankery Panchayath in Kannur was killed on his way to his house after his work.  Lastly Sri. Remith Uthaman of Pinarayi, which is the constituency of the present Chief Minister was brutally murdered on 12.10.2016 in the broad day light while he was on his way to buy medicine for his pregnant sister.  It is to be noted that Remith’s father Sri.Uthaman of Chavassery, a Swayamsevak and a bus driver was also killed by CPI(M) from inside the bus on 22.02.2002.  Now the family of Late. Sri Uthaman has no male member in the family.  This is a classic example of the brutality of the CPI (M) in Kannur District.  Instances like this are innumerable.

Commenting on the prevailing situation in Kerala, the Inspector General of Police expressed anguish and helplessness of the police machinery to tackle the extremism of the CPI(M) cadres.

The RSS ABKM condemned the continuing violence of CPI(M) against RSS and other opponents. It called upon the government of Kerala as well as the Union Government to take appropriate action urgently against the perpetrators of violence and necessary measures to ensure rule of law in Kerala. The ABKM also appealed to the people at large including media to create public opinion against the violent tactics of CPI(M) by raising their voice in various fora.

At the Earth Summit of 1992, organised at Rio De Janeiro by the United Nations Organization, 172 nations had committed themselves to the goals of world peace, sustainable development and environment protection. Unfortunately, the world has been continuously drifting away from these ideals. Once again in the Paris Summit of 2015 most of the countries of the world have committed themselves for achieving the goals of controlling rising global temperature. To fulfill the aforesaid ideals, all the nations, as an integral part of the world, need to strive for collective development with restraining consumption, and all the citizens have to behave with an approach of holistic relationship among the family, society and nature, then only sustainable harmony in the world can be ensured without struggle and conflict.

The Akhil Bharatiya Karyakari Mandal is of the considered opinion that the solution for current challenges, emerging before the world lies in pursuing the philosophy of Integral Humanism based on the eternal Bharatiya vision as propounded by Pandit Deendayal Ji Upadhyay. The basis for this philosophy is to nurture the world with an integral vision, inspired by the sense of universal well-being of the living and non-living entities of the world.

This is the centenary year of Pandit Deendayal Ji Upadhyay and is also the 51st year of his propounding the philosophy of Integral Humanism in light of eternal Bharatiya vision, relevant to present times. Considering this as the most appropriate opportunity for its implementation, the ABKM calls upon all the citizens including Swayamsevaks, the Union and various State Governments, and the thought leaders of the world to put in all possible efforts to ensure coordination among the constituents of the world order, including the nature.  For this purpose, appropriate experiments shall have to be conducted along with development of an appropriate model. This would facilitate fulfilment of the aim of blissful life of all living beings across the globe and universal wellbeing. 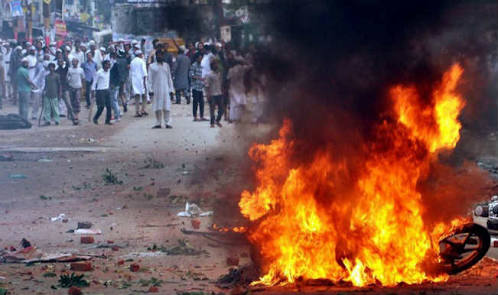