Rashtra Sevika Samiti, the largest women’s voluntary organisation of the word, is celebrating its 80 years of anniversary this year.

Began today on November 11, this 3 day to conclude on Sunday November 13.

While talking upon the current social issues Mohan Bhagwat said country where travelling was a taboo, our scientists have gone upto Mars. but at the same time we are facing environmental issues as a result of our Scientific and technological advancement. Though the entire World is concerned about the environmental issues, just detailed analysis is done during various seminars,  but do we really work up on the solutions?

He suggested that we should sacrifice our selfish motives because self-centeredness is the biggest reason for destruction of mankind. Man thinks the entire nature is under his command.  We deal with the nature as a consumer which is the fault line and it will lead us to devastation.

The recent ban on Rs.500/- and  1000/- notes is discussed a lot nowadays. Mohanji also mentioned this in his address. He said, by looking at the current technology it seems that the whole of financial exchange will be cashless in the near future. While expressing his concerns over rising terrorism and extremism in the world, he said that due to extreme thinking, men have become enemies of each other. Nations discussing terrorism are themselves supporting and backing it.

Mohan Bhagwat shared his thoughts at Prerana Shivir, organised by Rashtra Sevika Samiti to commemorate its 80th foundation year. More than 3000 Sevikas from entire India are participating in this 3 day Convention. One can experience glimpse of Laghu Bharat at Chattarpur, New Delhi where a unique emalgamation of the folklores from Ladakh to Kerala and Saurashtra to Arunachal is being felt. Sevikas are enthusiastically moving around wearing traditional costumes of their respective states.

Jain Muni Shri Jayantkumarji blessed the occasion with his presence. Muniji said that RSS and jain sampraday both are doing great things for the betterment of society and nation. He said that sacrifice for greater good is the very basis of Indian philosophy. He expressed his concern that most of the people in government thinks about themselves first and then about their party and nation is the last, but Nation should always be the topmost priority.

Annadanam Sitaji, Pramukh Karyavahika of Rashtra Sevika Samiti described the glorious journey of 80 years and presented the details of the programs and activities taken up by the organisation. Many elite personalities were present in this inaugural function. Dr.Mrudula Sinha – Hon.Governor of Goa, Smt. Kiran Chopra- Director of Punjab Kesari Group are few of them. Imbuing the spirit of Gou-Samrakshan, 'Gou Vandana' held as a Pre-Fair event of upcoming HSSF-2016

Sat Nov 12 , 2016
Bengaluru November 12, 2016: As a pre-fair event of Hindu Spiritual and Service Fair-2016 to be held in December, a unique event Gou-Vandana held today at Dakshin Ayodhya Sri Rama Temple at Kacharakanahalli, Bengaluru. Nearly 1000 women performed Gou-Poojan on the occasion, imbuing the spirit of Cattle Conservation. They took […] 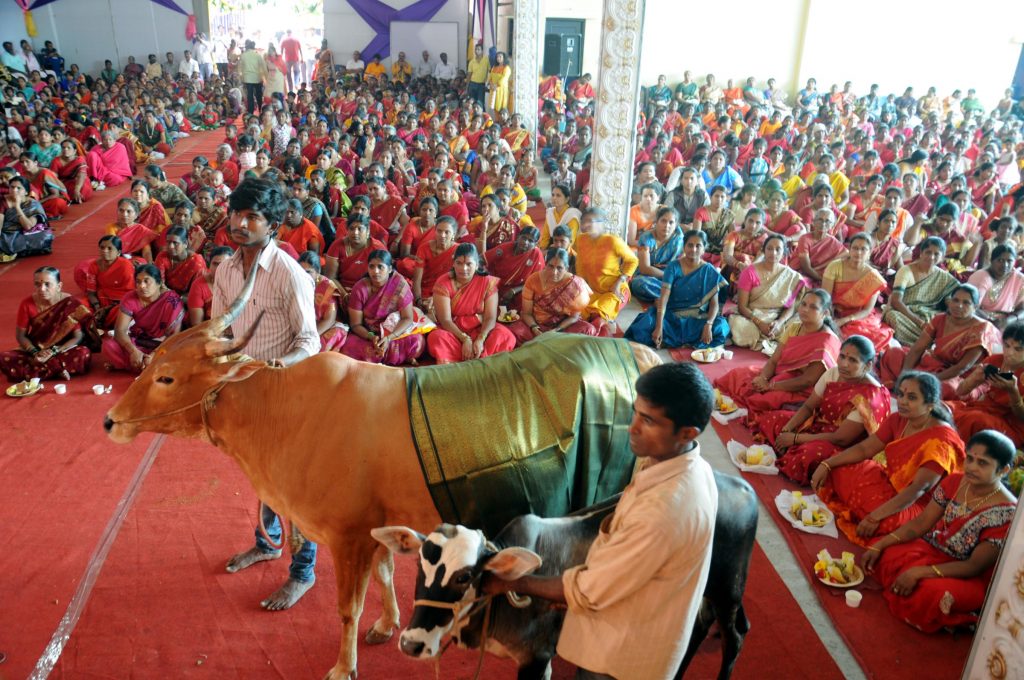