This will be the second edition of Hindu Spiritual and Service Fair-2016 in Karnataka, the last year’s event was held at same venue from December 9 to 13, 2015.

This mega 5-day conclave will have participation of more than 250 Hindu Socio-religious Service institutions from across Karnataka showcasing their various service activities by setting up stalls. Various cultural and spiritual programs is planned on all 5 days. The fair is expected to attract over 3 lakh citizens of Bengaluru and nearby districts. Students from over 100 educational institutions taking part in various competitions organised as a part of the Hindu Spiritual and Service Fair.

Hindu Spiritual and Service Fair intends to provide a platform for spiritual and service organisations and also to motivate, involve the public to be part of the process of social transformation.

The event is being organised by Hindu Spiritual and Service Foundation, Bengaluru with 6 themes as focus. They are; Cultural Show: At 7.00pm there will be unique folk cultural show entitled Janapada Vaibhava performed by wellknown artist Jagadish Jala and his team.

Rashtra Vandana: At the Fair, in line with culture and etho’s of this great nation and the 6 theme’s of the fair, there will be special programs on every day. On December 15, at 11.00AM to 12.30PM  Rashtra Vandana even to be held with more than 5,000 college students participating in ethnic dress.

Workshop:  At 2.30pm to 5.30pm, a special workshop for Voluntary organisations is organised at the Fair, will be addressed by Dr Prameela of Canara College Mangaluru, Dr BV Vasanth Kumar of Maharani College Mysuru, Sri Subraya Nandodi of Kasaragodu, Dr Ravindra of Kalaburagi.

Cultural Show: At 7.00pm there will be special cultural event ‘Barisu Kannada Dindimava’ by Dr Kikkeri Krishnamurthy and his team.

Matru Vandana: At 11.00AM to 12.30PM a special event Matru Vandana will be held in which thousands of Mothers will be offered with special pranams by school students. Sri Sri Siddalinga Swamiji of Siddaganga Matha of Tumakuru, Dr VB Aarati to address the MatruVandana event.

A lecture:  At 2.30pm  to 3.30pm a special lecture on Healthy Lifestyle by eminent Ayurveda Expert Dr Manjunath is organised at the Fair venue.

Cultural Show: At 7.00pm there will be special musical event on ‘Kallu Sakkare Kolliro’  by eminent singer Sri Vidyabhushan and his team.

Yoga: At 7.00am to 8.00am a special session on Yoga along with salutes to Bharat Mata to be held. Bhagini Vanitha of Yogashree Girinagar will perform the event.

Bhoomi Vandana:  At 11am Bhoomi Vandana, a unique event in which with 3,000 farmers from near-by villages to participate. Sri Sri Basava Mrtyunjaya Swamiji of Koodalasangama, Sri Kajampady Subramanya Bhat of Kutumba Prabodhan of RSS, Dr AS Anand Organic Farming expert to address the event.

Cultural Show: At 7.00pm there will be special cultural performance  ‘Alvas Samskrutika Sourabha’  by students of Alvas Education Foundation, Moodabidire.

Yoga: A special event ; Yogasana as a tool of transformation’ will be presented by Isha Foundation.

Kutumba Vandana:  At 11am Kutumba Vandana, a unique even in which more than 300 individual nuclear families participating with their siblings as Undivided families. Sri Sri Sugunendra Swamiji of Puttige Matha of Udupi, Sri TN Prabhakar of Mysuru to address.

Events on Each Day:

Intellectual Seminars to be held on each day on a specific socio-religious issue.

Several Desi Games and other Competitions for School Students.

Eminent scientist and Former ISRO Chairman Dr Kasturirangan will be the chairperson of the reception committee and 25 other eminent personalities from different walks of life. Sun Dec 11 , 2016
ITANAGAR, Dec 10/11: RSS Sarasanghachalak Mohan Bhagwat in his visit to the state capital of Arunachal Pradesh, formally dedicated ‘Seva Dham’, the office complex of Arunachal Pradesh Charitable Task (APCT), to the society on Saturday. Located near the Govt Women’s College at Lekhi village, the Seva Dham is the epicenter of […] 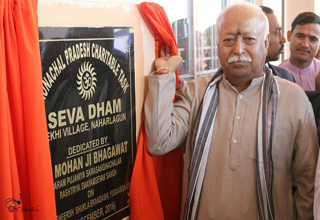