Bengaluru November 26, 2016: “K Suryanarayan Rao, popularly known as Suruji, dedicated his entire life for a noble cause, Dheya Jeevan, for the sole purpose of serving the society. His contributions to the organisation both in terms of structure and ideology will be ever remembered. He was a ‘Ratnadeep‘ by all means. As a Pracharak, Sanghatak he was known for his committed life for the society” said RSS Sahsarakaryavah Suresh Soni. Addressing on the occasion, RSS Veteran YK Raghavendra Rao remembered his association with Suruji since 1956. ‘Suruji was is one among a very few such a personality knows the pulse of entire Sangh in Karnataka since it’s genesis here. He will be remembered ever as a role model for an Ideal RSS Karyakarta’ said YK Raghavendra Rao.

Tamilnadu Uttara Pranth SahSanghachalak Dr Kumaraswamy addressed on the occasion, said ‘In Tamilnadu Suruji is the most polular name for Swayamsevaks. Kru Suryanarauan Rao as a name is less known to them. Thousands of Karyakartas were inspired by the words and guidance of Suruji in Tamilnadu. When Suruji entered Tamilnadu, it was a tough condition to begin Sangh work and to have organisational growth. Lot of Anti-Hindu, Anti-Hindi movements were going on in Tamilnadu. In spite of all adverse Socio-Political situations, Suruji stood like a tall leader, is responsible for the organizational growth of Sangh in Tamilnadu” said Dr Kumaraswamy.

Dinesh Kamath, Samskrita Bharati’s National Organising Secretary said “the demise of Suruji is an end of era in a true sense. He completely witnessed 3 generations of Sangh Work in Karnataka. He traveled across districts in Karnataka. Initially he was travelling to Shivamogga in weekends. He was a key man in organizing a mega camp at Yeshawantapura in 1948. He saw the first ban on RSS in 1948 and was jailed in Bengaluru. In Jail, he refused to receive tobacco allowance, but he money collected from which was used to purchase literature on Swami Vivekananda. He later became one of most authentic speaker on Vivekananda’s thoughts.”

“Suruji was sent to Tamilnadu in 1970 as Sah Kshetreeya Pracharak. But Suruji requested and took the responsibility of Pranth Pracharak of Tamilnadu which is of lesser rank in organisation compared to Kshetra Level. It was his greatness. He decided to shoulder Sangh works in Tamilnadu at grass root level. He did it in a great way. Contribution of Suruji as Vibhag Pracharak of Mangaluru is supreme, along with HV Sheshadri, Na Krishnappa. Suruji used to say ‘Each and every cell of the body belongs to the society’. He stood by these words till his last breathe. Suruji was first Seva Pramukh of RSS. He lead Seva projects of RSS. Initially it was around just around 11,000 activities, now RSS is running 176,000 activities across the nation. Suruji will be ever remembered for his great contribution.” said Dinesh Kamath. Tue Nov 29 , 2016
Udaipur Rajasthan November 28, 2016: RSS Sarasanghachalak Mohan Bhagwat, along with Chief Minister Vasundhara Raje inaugurated magnificent ‘ Pratap Gaurav Kendra’ at Tiger Hill, Udaipur Rajasthan. The Gaurav Pratap Kendra has been under construction since 2008 and has been developed at a cost of Rs 100 Crores. The Kendra will be […] 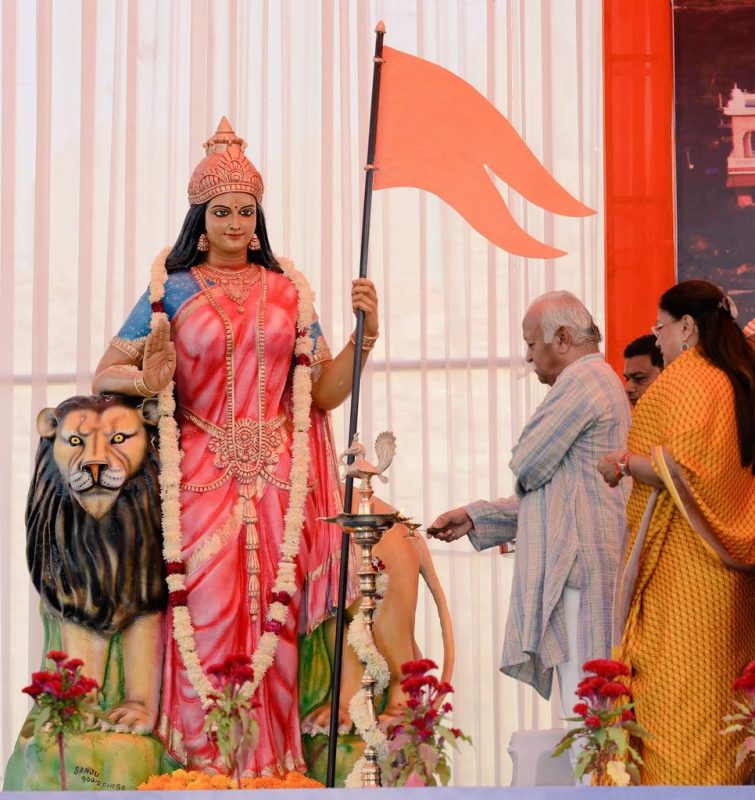