The two-day scholars’ meet has been organized to mark the completion of millennium year celebrations of Acharya Abhinavagupta, the great Indian philosopher from Kashmir and a greatest exponent of Shaivism. Exactly a thousand years ago, it is said, he along with 1200 disciples walked into a cave in Bheerwah, Kashmir, and became one with Shiva. Today, over 50 universities across the world are conducting research on Abhinavagupta’s works.

Deputy Chief Minister of Jammu and Kshmir Dr Nirmal Kumar Singh said, “There is a concerted effort by anti-India forces to polarise the people of Kashmir, especially the youth. Religious factors have nothing to do with this polarisation. The recent turmoil is a case in point. The last three generations of Jammu Kashmir’s leadership have also continually misled the people of Kashmir. Nevertheless, there is still a lot of scope for creating a positive atmosphere in Kashmir.” “Acharya Abhinavagupta’s philosophy and his works constitute the cultural legacy of Kashmir. It has to be researched, understood and popularized in the proper context. His work is as relevant today as it was a thousand years ago. When the youth get in touch with their roots, they will be empowered to thwart the negative forces,” Dr Nirmal Singh said.
RSS Akhil Bharatiya Sah-Prachar Pramukh J Nandakumar in his keynote address said “Acharya Abhinavagupta embodied the greatness of Bharat’s saints.  “Bharat’s history has been one of constant renaissance. A lot of great people have contributed to our culture, values and ethos. Acharya Abhinavagupta was amongst the greatest such philosophers,” he said. Referring to the constant efforts to sideline and eclipse the evolved Indian philosophies and traditions, Nandakumar said it was understandable when the British strategically undermined everything Indian in order to effectively colonize. However, it has been tragic that even the leadership of independent India has towed the same lines, he said. “Acharya Abhinavagupta has still not been discussed and researched upon as much as it should have been. There’s an imperative need to learn the true characteristics of our history and our philosophies. India’s sanskriti, its culture is a confluence of the triveni of Veda-Tantra-Yoga. Abhinavagupta is an essential part of this,” he said. The valedictory session tomorrow i.e. 7th January will be addressed by Shri Prakash Javadekar, Union Minister for Human Resource Development and Sri Sri Ravi Shankar.
The Acharya Abhinavagupta Millennium Year Celebrations Committee headed by Sri Sri Ravi Shankar ji has been celebrating thousand years of Acharya Abhinavagupta since January 2016.
Jawaharlal Kaul, Working Chairman of the Acharya Abhinavagupta Millennium Celebrations Committee and President of the Jammu Kashmir Study Centre, said “The yearlong Millennium celebrations of Acharya Abhinavagupta, the genius of Kashmir has evoked tremendous interest and enthusiastic response, not only among scholars and students but also among common people all across India. More than a dozen universities and institutions of art and culture have participated in these celebrations generating a great debate on relevance of his philosophy to modern India. It is therefore natural that the concluding event of the year-long celebrations should be celebrated as a multidimensional conference involving hundreds of university teachers and scholars in various fields to meet in Bangalore and exchange ideas and experiences about this great philosopher and also discuss various aspects of Jammu and Kashmir,” said Jawaharlal Kaul,
At the National Scholars Confluence several strategic and subject experts will participate in eight “Dialogue Sessions” to brainstorm on various aspects of Jammu Kashmir. These “Dialogue Sessions” will dwell upon important topics having far-reaching implications related to the ongoing discourse on Jammu Kashmir.
The topics of dialogue sessions will include:
1. Legal and Constitutional Status of Jammu Kashmir
2. Jammu Kashmir in History
3. Geo-Polity of Himalayan Region
4. Acharya Abhinavagupta & Communication and Media
5. Acharya Abhinavagupta and Indian Literature: Classical and Folk
6. Acharya Abhinavagupta and Cultural Studies
7. Acharya Abhinavagupta and Civilizational Studies
8. Acharya Abhinavagupta & Philosophy, Spirituality and Sadhna
Ashutosh, Director JKSC said that the session on “Geo-polity of Himalayan Region” will have vibrant discussions by strategic experts and former defence personnel on PoJK (Pak-occupied Jammu Kashmir), CoJK (China-occupied Jammu Kashmir) and Gilgit-Baltistan. He added that the dialogue session on “Legal and Constitutional Status of Jammu Kashmir” will have legal luminaries discuss the relevance of Article 370 and Article 35-A in the light of recent Supreme Court decisions where the apex court had pulled up the High Court of Jammu & Kashmir for overreaching their ambit on Article 370.
Jammu Kashmir Study Centre (JKSC) is an independent and objective think-tank dedicated to the study of Jammu Kashmir in its totality. The aim of JKSC is to dispel misinformation and create awareness about facts relating to Jammu Kashmir. JKSC was established in 2011 to undertake policy relevant studies on all aspects of this strategically important Indian state and disseminate the outcome of these studies in a right perspective in the public domain.
The partner institutions of JKSC for this programme include Sri Sri Ravishankar University, Bhubaneshwar; Indira Gandhi National Centre for Arts, New Delhi; Indian Council for Philosophical Research, New Delhi and the Makhanlal Chaturvedi National University of Journalism and Communication, Bhopal. 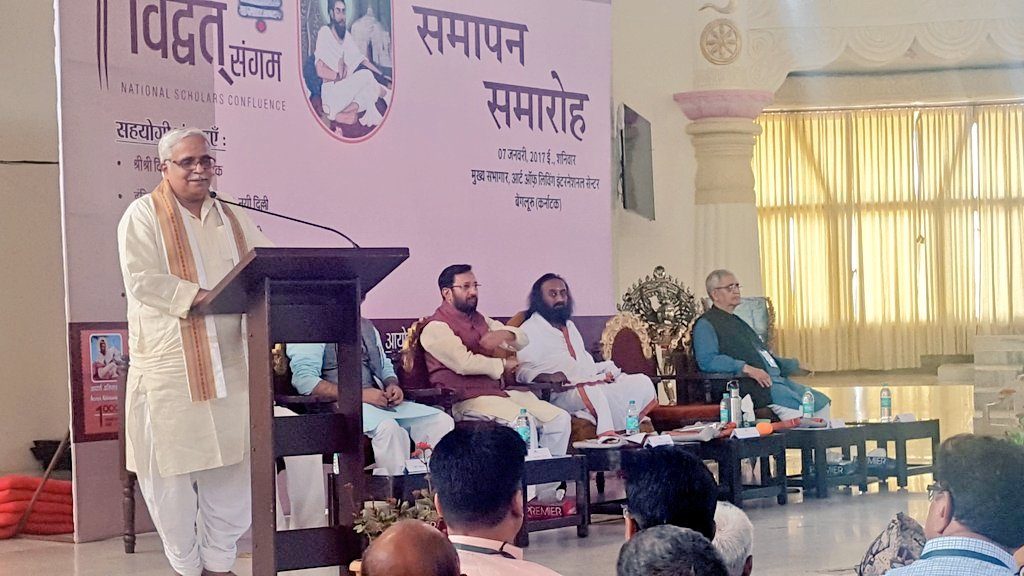