Bengaluru March 29, 2017: “Hindutva is our national identity (Asmita). A Hindu is the one who loves and cares for everyone in the society thinking above caste, gender and language barriers. Hindu observes the society with a Ekatma Bhaav (Integral Vision). Hindu is the one who always conserves the nature and never exploits it. (Prakruti kaa Poshan, not Shoshan). A Hindu practices the values such as sacrifice, selfless service, feeling of ‘we’ instead of ‘me’ in his daily life. Such a Sakriya Hindu is an RSS Swayamsevak. A Swayamsevak is the one who brings a transformation in the society” said RSS Sahsarakaryavah V Bhagaiah in Bengaluru. ‘Yugadi coincides with the Birth Anniversary of RSS founder Dr Keshava Baliram Hedgewar. Its an annual rare opportunity for all Swayamsevaks to offer Aadya Sarasanghachalak Pranam and to pay tributes the great personality. RSS never believes in worshipping individuals. However, Yugadi is an opportunity to remind the life and legacy of Dr Hedgewar, who himself dedicated everything for the cause of serving this nation.’ said V Bhagaih.

‘In 1925 when RSS was founded by Dr Hedgewar, he said there is nothing is new here. No new concepts, no new ideology, no new works. It is an effort  to bring back the glory of this great nation. reminding everyone about the national identity (asmita) of Hindutva. Dr Hedgewar, who was a freedom fighter and jailed twice for his participation in freedom movement, founded RSS. Why? Hedgewar used to say, This is Hundu Rashtra. Whenever Hindu Samaj is united, the nation will be stronger. When Hindu Samaj is weakened then the nation will be weak. Hence realising the fact that I am a Hindu, I am part of Hindu Samaj and this is Hindu Rashtra, the prime need in making a stable and strong nation. Dr Hedgewar began RSS and worked for a single cause till his death. RSS’s seceond Sarasanghachalak Guruji Golwalkar used to say that Dr Hedgewar’s heart-blood-cells is filled with passion for social work and dedication to the society. Yugadi makes us to remember such a great personality”  V Bhagaiah added.

”Even after 91 years of RSS and 70 years of Independence, we still see that nearly 40 to 50% of the society is still affected with Illiteracy, Drug Abuse, other social ailments. We need institutional changes to overcome all these problems. Special attention is necessary to improve qualitative service in Government schools on Education and Government Hospitals on healthcare.” said RSS Sahsarakaryavah V Bhagaiah. Fri Mar 31 , 2017
‘Social Equality  is a Matter of Conviction’: Interview of RSS Sarasanghachalak Mohan Bhagwat to Organiser and Panchajanya. RSS Sarsanghachalak Dr Mohan Bhagwat with his call for ‘One Temple, One Cremation Ground and One Water-body’ for all in a non-discriminatory way has provided a new action programme for social equality and  harmony. […] 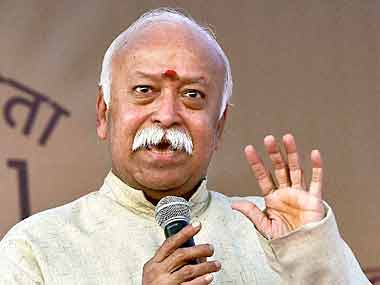