16th Oct 2017: A massive rally was organized in the Shivanna Chetty Garden by the Citizens for Democracy condemning the killing of Sri Rudresh last year same day. On 16th Oct 2016, Sri Rudresh was hacked to death in the wee hours when he was returning from the RSS Vijayadashami route march. The gathering was to remember Sri Rudresh in a peaceful way and to demand the ban on Fundamentalist organizations like PFI, SDPI and also to allow the police to function without bias which would definitely result in a peaceful state. The earlier plan of the delegation going to the Raj Bhavan and rendering the memorandum through a silent march was denied permission. CFD will be rendering the memorandum to the Karnataka Governor V R Vala in the afternoon today and member of CFD Sri Radhakrishna Holla read out the same to the public. The voices against PFI and its political outfit SDPI was on the high and hundreds of citizens participated. Placards in the rally read – BAN PFI, SDPI , ‘Patriotism cannot be killed’, ‘Do not let Karnataka turn into another Kashmir or Kerala’ Sri Gopal, the VHP leader who was present spoke about the the indifferent attitude of the State Government. He strongly said the organization Rudresh represented – RSS was always pro-Dharma and Desha and the same should be understood. He also spoke about the recent incident of the techie Nandini who was assaulted in the city for speaking her voice on Desi cow trafficking. The appeasement tactics which is ongoing with the current State Government, is making the life of Hindus to be in danger. Along with many Bhagyas which in vogue Hatya bhagya for the nationalists and Atmahatya bhagya for the police is in the helm he protested. He reminded how the radical Islamists in Kashmir, Kerala, West Bengal threaten the public as well as the police authorities and still the lesson is not learnt by the State Government of Karnataka. Gopal also said the State would also plan its Tipu Jayanti for the third year this time and warned that such a Jayanti is unneeded.

The PFI (Popular Front of India) and SDPI (Social Democratic Party of India)  are growing as anti social forces and indoctrinate the lessons of anti-nationalism to people around us. It is a proven fact that PFI and SDPI are behind the heinous murders of Hindu social activists in the state.

Rudresh was murdered on 2016 October 16th in Shivajinagar. Any personal strife or political hatred was not the cause for his murder. The charge sheet submitted to the court by Karnataka police and National Investigation Agency (NIA) clearly says, the accused murderers Irfan Pasha, Vaseem Ahmed, Mohammad Sadiq, Mohamma Mujib Ullah, Asim Shareef are members of fanatic PFI and its political wing SDPI. It is evident from these violent acts that PFI which was formed after the ban on SIMI, is growing as a fanatic fundamentalist force in the state. Rudresh was murdered for the cause of establishing Islamic State and to instill fear in peoples’ mind by killing kafirs (Idol worshipers and those who don’t believe Allah).

‘Yesterday it was Rudresh – Tomorrow  it  could be us’; we cannot  afford to ignore this call.   Rudresh was a social activist and never had any agony or fight with Muslims. Yet he was murdered. The fanatics setting forth with swords in hand to kill kafirs shall not show sympathy even if people standing before them are peace-loving gentlemen. If our society does not wake up now, the Hindu blood could flood the state. Since the State Government is totally indifferent towards Islamic fundamentalism, the society should wake up to fight against this menace, should demand a ban on these organizations. Mon Oct 23 , 2017
23, Oct 2017, Bengaluru: ‘A fanatic traitor like Tipu does not deserve to be celebrated in the state. It is a need of the hour that we celebrate anniversaries of great people who have contributed to the society and not ones who have disturbed peace time and again’ opined Sri […] 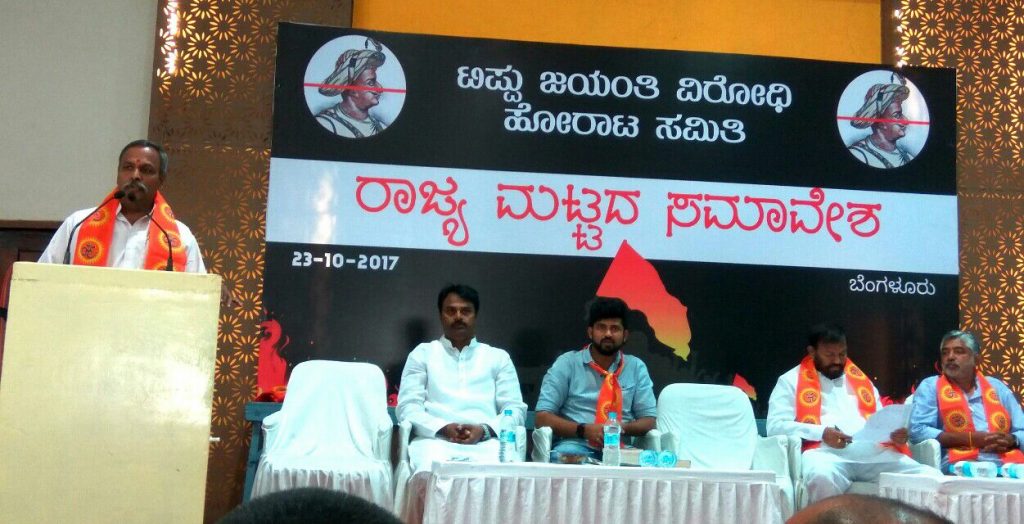