Indore, 27Oct 2017: Sangh was not born with the intention of becoming an influential organization, but with the idea of organizing the society said Rashtriya Swayamsevak Sangh’s Sarasanghachalak Sri Mohan Bhagwat. The youth prepared to sacrifice self for the sake of the society would result in the upliftment of the society, nation they live in. This is the very approach Sangh employs in its Shakhas said Mohan Ji in his address. He was speaking at a speacial RSS event – Shankhanad organized in the city for college students ensemble on Physical (Sharirik) activities. He reminded how the founder of RSS, Dr Hedgewar in his early formative years had decided that he had to serve the country and had decided the path he wanted to tread. Doctorji he said was in the forefront during the Vande Mataram movement and had associated with it wholeheartedly. DortorJi also had realized the truth that we are a culturally bound country. While staying united culturally and have the prime goal of nation’s development as also working towards it was utmost essential.

Hindustan is a Hindu Rashtra. Having said so we are not here to build animosity, also not to say that the country does not belong to anyone other than Hindu. If one’s ancestors are from the same land then it is obvious that we all ought to be called Hindus. Similar to the analogy where a citizen of Germany is called German, a citizen of America is called American, people from Hindustan are to be called Hindus. “The term ‘Hindu’ covers all those who are the sons of Bharat Mata, descendants of Indian ancestors and who live in accordance with the Indian culture.” No one leader or party can make the country great but it needs a change and we will have to prepare society for it, he said. Practice,Thought and Vision are the three things within us which needs some finetuning so as to see our country in the state of Vishwaguru. The people from different though processes also join hands for the development of their country in Europe and we have to imbibe it from them. The society is more responsible than the governments with regards to development of the country he said. “For development to happen in ancient times, it was under God people took shelter, but in Kaliyuga people look towards the government. But the fact is, the government can go only as far as society goes,” he said. “Society is the father of the government. The government can serve society, but it cannot bring changes in society. When society brings changes in itself, this change reflects in the government and the system,” he observed.

To make India powerful, prosperous and a “vishwa guru”, the countrymen will have to rid their hearts of the thought of “discrimination on any grounds”, he added. 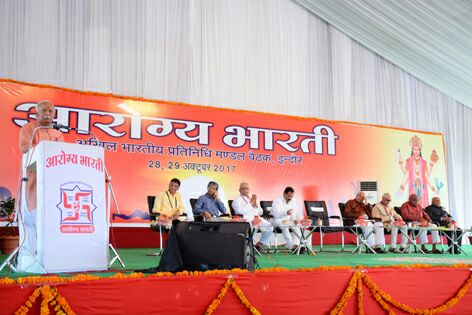