On 20th May 2017, Professor R. Vaidhyanathan  delivered a talk on ‘Global Economic & Political Crisis & its Implications on India’ organised by Manthana Bangaluru. A report of the same is compiled by Sri Murali Ramakrishnan and the same is validated by Prof. R Vaidyanathan,

(Who else could provide a better insight on the topic other than Professor of Finance R. Vaidhyanathan of theIIM Bangalore. Prof is indeed a Fulbright scholar twice.) The review of the session, is on its context and Professor’s thoughts, which gave us clear indication of our Cyclic nature of economy or in other words Cyclic nature of our living which determines the economy. Personally, it was the first session to witness Professor’s speech and be in proximity to understand the fundamentals of Political implication to our Nation.

“Definition”, “Terminology”, “Root Cause analysis” & “Scope for revival” are the crux of this session for commoners like me. Precisely that’s what Professor has prepared us in our path ahead to understand Economy.

What is Global Economy.?

This definition is foremost important to understand as it has been redefined in comparison to what is propagated. 1999-2000 – Major financial crisis in Thailand, Korea, Indonesia. That was called Asian Financial Crisis. 2005 Latin America countries – That’s called Latin American Crisis. Greece, Ireland, Spain and Portugal and France. This became called as Global Financial Crisis. Don’t we see something sounding out of Sync? Is it because G7 used to call-shots on Global economics few centuries ago? Terminology magnifies the crisis more than its real context itself.

In the meantime I do want to highlight Professors Witty nature. That’s his prowess with forbearance, (Kshamanvidam Sauryam as one of the Great Character of this Humanity).

‘ The real essence of the sensitivity of Crisis becoming an advantage to some Subject Matter experts in teaching profession, who can give gyan on how it could have been averted, post the occurrence.’

The crisis experienced in the EU region (G7 countries) are just Anglo-Saxon Crisis. Can’t be construed Global in nature. In other-words I may say Self inflicted. Basically the stability of Economy is primarily determined by the GDP & PPP (Purchasing Power Parity). Earning & Purchasing power is not directly proportional due to the demographic advantages in prices. Let us now look at the contribution of regions in Global Economic growth or stability. More than half of income (GDP) comes from Emerging market Emerging Market are becoming 52% of Global income and since the time 2016 data released & G7 is 36% The Decline of G7, called for larger participation which became G20 and unfortunately India became part of it without any forethought. Now Can decline be reversed.? Difficult.. Even in an utter decline, we have a tendency not to accept failure but categorise them in scope for improvement. This is what seems to be happening.! Some Basics & Facts: 1820 the gain of G7 started. Till then, China & India have been contributing more than 50% of the GDP globally. Astounding isn’t it. **1917, Aurobindo, said “What started in 1820 will come to an end in 2020.” That’s an extraordinary foresight. “On the ruins of the western civilization the East will rise.”  India & China are therefore re-emerging market as they were before 1820 and now they are reinvigorated further. Countries like China, USA, India & Japan will determine the Purchasing power for next couple of decades. But all these are equally indebted due to their borrowing to neck deep.

‘Britain is almost 500% in debt. We might have to take care of them, as we have been sending more battalion of defaulters’

What has caused the decline of G7 and Country like USA.? This is an interesting aspect to know to arrest any possibility that we don’t commit to that same blunder! Three type of borrowed money

2.) Corporate Debt (Private players) These become a worrisome factor due to its shift on accountability itself falls back to Govt due to its magnanimity of Governance

3.) Household debts This became the most sensitive debt which can collapse the livelihood or existence. Few parameters to note on why this happens:          a.) Savings aspect is Un- known

b.) Debt rate at household level from Education loan till Mortgage increase

c.) Collapse of Family life that leads to nuclear in state, become more prone for any economical crisis

d.) Unemployment to Youth Example of how western or developed countries found them wanting!!! *Womb to Tomb borrowing. Study says, on an average 14 credit cards are per household. US: Higher proportion of credit limit in USA. But imagine the humongous nature of the credit limit that’s been offered to the public. Isn’t this imply how we get trapped into debt, particularly household.!? Also due to heavy taxation leads to transfer of responsibility shifts to govt to take care of family economic need. This design calls for smaller family or nuclear family, as this will give added advantage for more borrowing or lending options. This is their theory of growth. I recall Sage Charvaka theory of Economic growth at this time, which is absurd and failed model. Why the above factors are detrimental:- Primary motivation for saving itself is based on the need of the generation. When it becomes nuclear family or one member family (Single mother), that’s irrelevant or not found important. So debt rate increases which will eventually be a burden on the Govt as they own the responsibility wantedly.  So as the size of the family decreases, EU took an adventurous step to allow influx from unethically disturbed lots from Syria, Pakistan with the view that it can increase their consumer base! But The yield is getting disasterous. (We have started to see so many unrest happening in Germany , France and other Smaller nations in EU). These are all unwanted ethnic problem that doesn’t help the economy anyway. Youth Unemployment became a matter of subject…

‘Definition of Youth became subjective in various countries. In our country we can be youth until we want. So Unemployment to youth in our country means its sheer lethargy.’

Let’s embark into the manner in which how we categorise the organised vs unorganised sector. How these so called Corporate sector helps the Country? Are they in real terms?!!! The bigger corporate choose Tax Haven countries to show their profit. So this doesn’t give any value to GDP of the home country!. So should we compare this with unorganised sector of India (Just to divulge some facts). **Here I sincerely beg my pardon to use the term un-organised after hearing the term from Professors’ thoughts. Basically they should be called Non-Corporate sector which is highly organized in nature in comparison to organised sector which is disorganised like Govt and Private institutions. Let’s take it with the pinch of salt. So all the above caused a major imbalance in Western economies and eventually causing a decline. Aren’t we saying Globalisation is a humbug all along as the converging point itself isn’t there for an impact as similar to west vs India But this doesn’t mean we don’t have problem..! We can put effort to streamline this / overcome. **** Bharat share of income largely come from Services sector with manufacturing & Agri as other major drivers of GDP. Astonishingly (This is reconfirmed in this session by Professor Vaidhyanathan) Un-Incorporated sector (As they say Unorganised sector) contributes almost 50% of the GDP in our country. Employment is driven by these Un-Incorporated sector to the rate of 3/4 of the need!.Isn’t this startling fact And the critical component “Savings” is around 1/3, is all along the fulcrum of the GDP driver. Against the wish of FII, who think they are determining the growth of our country, it’s actually the Domestic savings generated by our Mothers’ will ensure the need of economy for the envisioned need. Also one important factor, Caste based model of running business fetch more inroads in our country than otherwise how the liberals state to abolish it. Let’s be clear. Caste is an essential ingredient through which culture can be protected and by which it becomes Joint family system and eventually bring in stability in our growth. Caste is a social Capital. Vested interests who in the name of neutrality try to abolish this fabric by creating divisive ideas. Discrimination is never acceptable, but Caste on its own fabric means a lot to us. So what should be our Vichaar dhara for Economic growth.

1.) Cull the inhibition of associating with Global model. (Even USA in the present form is trying to decouple from global after their self inflicted pain)

2.) Domestic driven growth as we have that advantage naturally

3.) More decoupling and not live in mythical world of FDI determines us

5.) Our leadership Vision is more than idle and Corporates needs to embark in this Journey.

Wed Jun 21 , 2017
Mysuru: Jun 21 2017. A mind blowing 54101 participants on the Yoga Day today has made the event truly wonderful. The cultural city of the State, Mysuru witnessed today this magnanimous number of participants which was a resultant of toiling for weeks by the organizing folks. Mysuru MP Pratap Simha […] 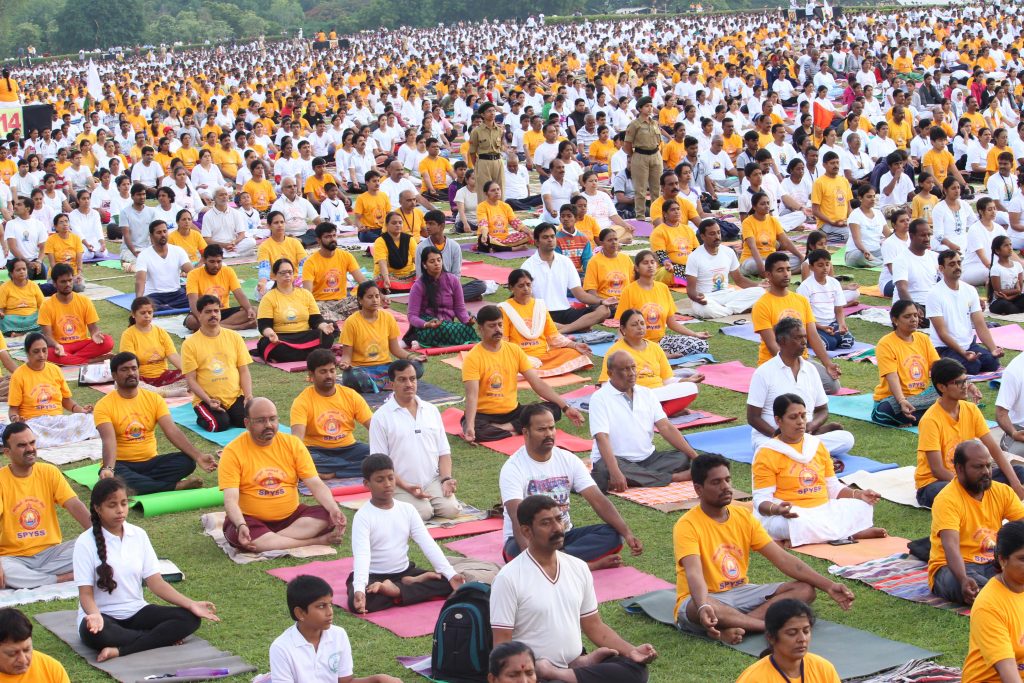