Bengaluru, Aug 12,2017: The Karnataka Chapter of Forum for Integrated National Security (FINS) had organized a symposium on “Indo China standoff at Dokhlam – Strategic Perspective” in Bengaluru today. Key speakers at the function were Mr. N.Parthasarathi, a veteran diplomat retired recently as a Consul General of India in San Francisco, Mr. Sandeep Unnithan, who is an Executive Editor at the India Today magazine and Gen V.M. Patil, who was the first defense advisor in Indian embassy in Vietnam and he is also the national vice president of FINS. The inaugural address was delivered by Mr. Parthasarathi, who began by talking on the events that led to the stand off at Doklam. He explained the strategic importance of the Doklam plateau, a control of this region by the Chinese implies that they could choke us at Siliguri corridor and thereby potentially lose on the control of the North-East region. Parthasarathi spoke about the Chinese goal of creating a hegemony in the Asian region and the only power who could challenge them in achieving this, is India. He opined that, China would have never expected this resistance from India at Doklam and now China has left themselves cornered by issuing rhetorical statements through their state controlled media and are trying ways to retract from this standoff. Special address in the symposium was by Mr. Sandeep Unnithan, who has also authored a book called “Black tornado”, a master piece on 26/11 terrorist attacks in Mumbai. He started by narrating an incident of January 2004 from the Libyan desert, where in the Libyan leader Muammar Gaddafi agreed to surrender the weapons of mass destruction to the United States fearing an attack on him on the likes of Saddam Hussain. The highlight of the story was the plastic bag conceded by Libya’s nuclear chief, which emblazoned an address “Good looks fabric and tailors” from Islamabad. Pakistan had sold their nuclear tech to Libya which they had obtained from China. He pointed out the fact on how China kept their “enemies at the gate” fight among themselves and abetted Pakistan and North Korea in achieving it; for instance, India was firewalled by Pakistan in the south Asian region, South Korea and Japan were firewalled by North Korea in the east Asian region. He also made a special reference to Sun-Tzu, a Chinese philosopher, a military strategist and how China is adopting his principles of waging a war by not fighting it.

Sandeep went on to quote Sun-Tzu- “Ultimate excellence lies not in winning every battle, but in defeating the enemy without ever fighting” which exactly is what China is practising religiously. The concluding talk was delivered by Mr.V.M Patil, a 1962 war veteran and a brave army man who also played a key role in eliminating terrorism in Punjab during the “Operation Rakshak” in 1990. Patil began by narrating his experience of 1962 war and how we were under-prepared for the war. He highlighted the fact that India then had refused to accept the air force aid offered by John Kennedy, the then US president. From the Chinese perspective, he saw a startling resemblance of how Mao Tse-tung plotted to throw his adversaries to XI Jinping who’s following his footsteps. He touched upon the fact that despite India’s military budget being less than the Chinese spending, the Indian defense has always been right there to defend the motherland and assured the excited audience of the military abilities that India possess. 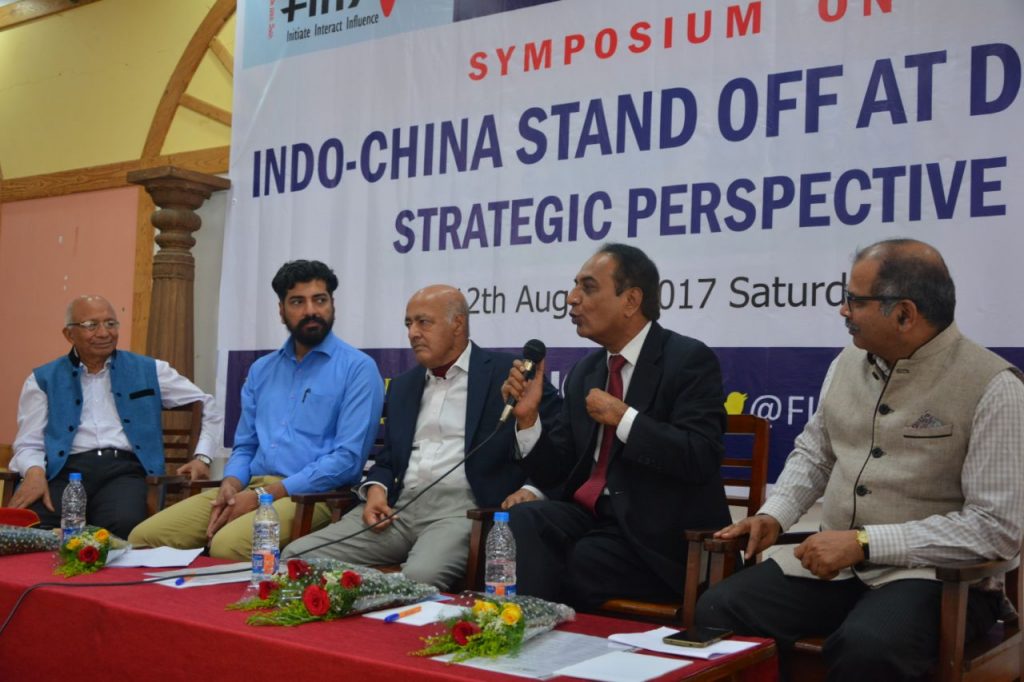