Bengaluru, Jul 8 2017: Vishwa Samvada Kendra, Karnataka organized the annual Narada Jayanti celebrations to felicitate two journalists of the mainstream media in Bengaluru today. Sri Ramadhyani, a freelance cartoonist actively drawing cartoons for a daily  HosaDigantha and a weekly – Vikrama apart from other local news papers on various social and political issues was presented with Ti Ta Sharma memorial award for his active journalism. Sri G Anilkumar, Editor of the Kannada weekly Karmaveera and an author of few books was presented with the Be Su Na Mallya memorial award.

Narada Jayanti is celebrated throughout the country keeping in mind that DevaRishiNarada was the first communicator who could move freely around the different Lokas, and establish a healthy communication between all. Journalist of the today’s world also would do the same in collecting information from various places and always would want to communicate to his readers or viewers. The more healthy the information the more better the society would transform into. The idea of Narada Jayanti and Vishwa Samvada Kendra as an organization was explained to the audience by Sri Vadiraj, Karnataka DakshinaPranthaPracharPramukh.

Freedom of Expression is to be admitted but not at the cost of sovereignty and Integrity of the country.

“With the onset of the freedom of expression gaining momentum these days, Suryaprakash said he would not vouch for any one claiming the rights without having the clarity on fundamental duties. A sure No was his answer to ones claiming the freedom to express their thoughts and yet not abiding by the Article 19(2) which posed threat to SOVEREIGNITY and INTEGRITY of the country”. He was speaking in the event organized by Vishwa Samvada Kendra at Mythic Society, Bengaluru.

Dr Suryaprakash remembered the days of Emergency which was imposed in the country by Ms Indira Gandhi was against the principle and ethics of the ruling government and also to subdue democracy. Hitler also had done the same in Germany and what Ms Gandhi did was no different. His latest book The Emegency: Indian Democracy’s Darkest hour also throws light on the subject and how the opinions and free voice was suppressed by the leader of the nation then. He also displayed his dismay of those days when the police was reviewing the articles which were written by him like an Editor!

The Media, Parliament have always been the Watchdogs for anything wrong happening in the country be it with law makers or otherwise. However if both fail to keep up to the responsibilities entrusted upon them, it could only ruin the pillar of democracy.

Suryaprakash spoke on the recent development in the state of Karnataka on the speaker sentencing two editors of the Kannada tabloid and felt it had to be reconsidered and it was unacceptable on the part of the government to impose such sentences which also failed in the past.

He was positive on the number of people growing on readership and viewership for print and electronic media when compared to the days of the past. A Surya Prakash is an author and Columnist and a leading commentator on Indian constitutional and parliamentary issues and governance. Apart from his pioneering work on Parliament, Dr. Surya Prakash is known for his well-researched interventions on national issues. Over the last 45 years, Dr. Prakash has held key positions in several print and electronic media organisations. He was Editor, Zee News; Executive Editor, The Pioneer; India Editor, Asia Times, a business and political daily published from Bangkok and Singapore; Political Editor, Eenadu Group of Newspapers; and Chief of Bureau, The Indian Express, New Delhi. Currently, apart from heading Prasar Bharati, Dr. Prakash is a Distinguished Fellow at the Vivekananda International Foundation, a New Delhi based Think-Tank and Director, India Foundation, New Delhi. He is also Member, Executive Council, Nehru Memorial Museum &amp; Library, New Delhi and Member, Board of Governors, Indira Gandhi National Open University (IGNOU), New Delhi.

His Columns appear in The New Indian Express, The Pioneer, Dainik Jagran, Eenadu, The Prameya, Prajavani and Dinamani.

Surya Prakash was awarded the K.K. Birla Fellowship to study the working of Indian Parliament in 1992. He also secured a fellowship from the Frederick Ebert Foundation to study the working of Standing Committees of the German Bundestag in 1993. He has travelled widely and observed the working of the German and British Parliaments. He was a Member of the Lok Sabha Fellowship Committee that awarded fellowship annually to scholars studying parliamentary institutions. He is also recipient of the Karnataka Rajyaotsava Award; the Sardar Patel Fellowship from the Institute of Policy Studies; the Karnataka Patrika Academy Award; and the Bipan Chandra PalSanman for Fearless Journalism.

He is popular for his books, What Ails Indian Parliament, Public Money, Private Agenda – The Use and Misuse of MPLADS, The Emergency – Indian Democracy’s Darkest Hour.

Ti Ta Sharma is considered as the Bhishma of Journalism in Karnataka who contributed to the field of journalism thru his fearless writings. A Gandhian by ideology contributed to writing about Independence, Kannada Language and heritage and unification of the state. He stood tall thru his writings which were unbiased and editorials which seldom shook the governments and exposed their failures

Brief about Be Su Na Mallya

Yadav Rao Joshi, pracharak once invited Be Su Na Mallya to run the weekly Vikrama which was born out to give its readers the taste of nationalism. Mallya who was working in a bank not only quit his job but also contributed whatever he earned during his resignation to the weekly. Vikrama was started in the year 1948 and was shut down immediately after the assassination of Mahatma Gandhi. B S N Mallya wrote passionately and fiecelessly editorials which threw light on many nationalistic issues be it the Kashmir issue or the China war and the failure of our leaders or even warning Lal Bahadur Shastri during his visit to Tashkent. Mallya is said to have built innumerable number of writers who are settled in various media houses today. Vikrama this year completes 70 years and Mallya has had the credit of being the longest serving editor. Mallya lived a simple life as a bachelor. An anecdote to his simplicity is in the fact that he was not allowed into the five star hotel in Bengaluru to attend a press conference for he had worn a Dhoti and slippers and that the hotel were reluctant to let Mallya inside for not adhering to the dress code. The newspapers then had supported Mallya and written editorials condemning the act of the hotel

Hailing from Shivamogga district of Karnataka, Ramadhyani Krishnamurthy has been into the field of cartoons since 1983 and has contributed to newspapers, magazines his art and has alerted the society about the social, political, mishaps. He has been awarded Karnataka Madhyama Academy Award and alsoMayakamat memorial award. 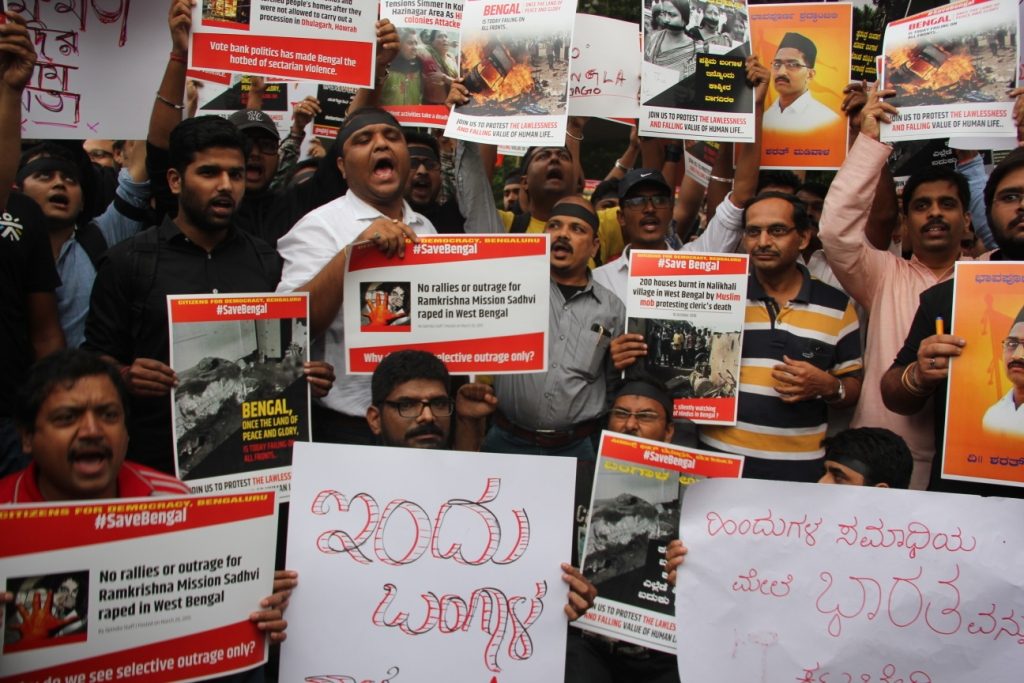