25 Sept 2017, Bengaluru: The European concept of nation and the Bharatiya idea of Rashtra need thorough understanding and ours is a more profound and inclusive concept said Dr. Krishna Gopal, Sahsarakaryavaha, RSS here today. He was delivering a talk in Jayanagar’s National College, HN Kalakshetra on the occassion of Pandit Deendayal Upadhyaya’s 101st Birth Anniversary.
The Western countries have taken race, language, geographical limits as basis of their nation. These defintions are exclusive in nature and lead to conflicts. We in Bharath have had a more inclusive and wider basis, which is culture (Sanskriti). It is this culture which holds together the people in Bharath, despite differences in looks, languages and worshiping patterns, said Dr. Krishna Gopal in his address.
We have been taught by our ancestors and elders and have always practiced seeing Divinity in all beings and that aspect certainly stands out in the eyes of westerners who look at us with awe. This is the very concept of Ekatma Manava Darshana propounded by Pandit Deendayal Upadhyaya, said Sri Krishna Gopal. He remembered an incident from the life of Deendayal Ji.

A guest arrived at his home at midnight asking for water, but was served with food and that was the practicing of Atithi Satkara which is basis of respecting the interests of everyone under all circumstances.

The selfless attitude of us in Bharata is always acknowledged by others and that has come to the fore because of our respect and love towards Nature. So seeing God in a being is not just confined to human beings but extends to all living and non-living beings present around us. It does not end there, we also revere our Bharata Mata as Goddess and worship her, added Krishna Gopal Ji.
Sri V Nagaraj, Dakshina MadhyaKshetra Sanghachalak of the RSS, Karnataka Dakshina Prantha Karyavaha Sri Na Tippeswamy, Sahkaryavaha Sri Sridhar Swamy were present.

Sat Sep 30 , 2017
Nagpur, 30th Sept 2017: RSS Sarasanghachalak Dr. Mohan Bhagwat addressed the swayamsevaks today on the account of Vijayadashami here today. A gist of his speech below:        We have assembled here to celebrate the pious occasion of this year’s Vijayadashami. This year is the birth centenary year of Venerable […] 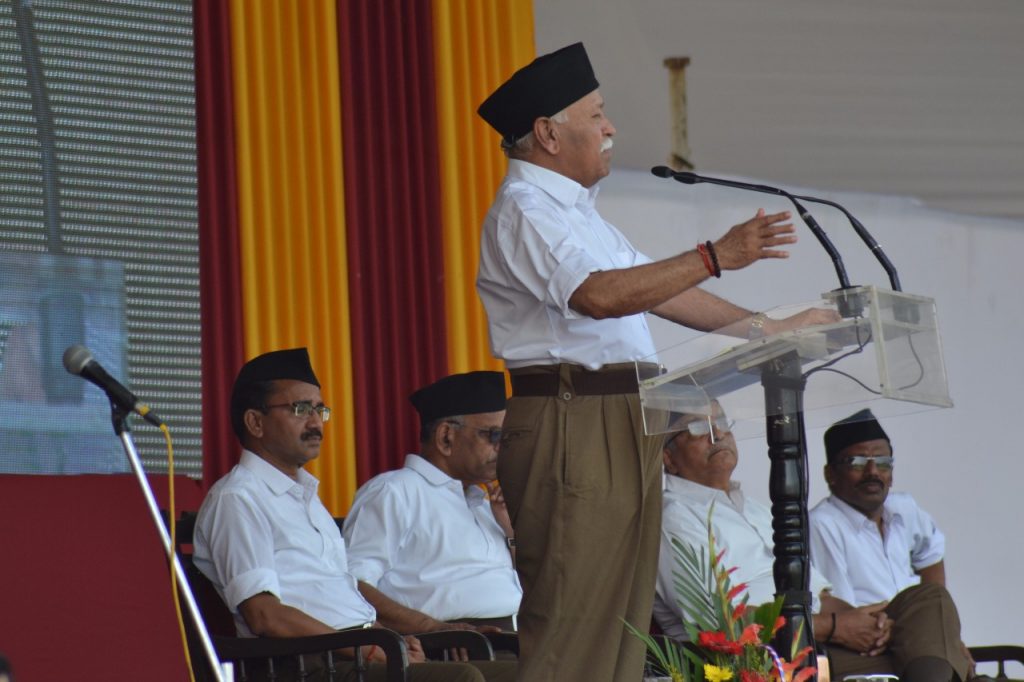