RSS-ABPS paid homage to all the distinguished persons who contributed to the national cause through their hard work by dedicating their genius, wisdom and abilities in various fields.   Sri K Suryanarayana Rao, a guidance force of RSS, Shri Cho Ramasamy, Editor of Tamil weekly, Tughlaq, Selvi J Jayalalitha, Chief Minister of Tamilnadu, Sri M Balamuralikrishna, Famous classic musician were some among from Tamilnadu State.

RSS mourns the passing away of those who lost their lives in various accidents, natural calamities, who sacrificed their lives in the border skirmishes and those who were made the victims of violence due to political intolerance.

ABPS pays homage to all such departed souls and pray for their eternal peace besides expressing deep condolences towards their family members.

Tour of RSS Sarsanghachalak This year it was planned that P P Sarsanghachalak would seek audience with prominent personalities from all walks of life. They included prominent saints, persons from social, religious, educational, business and industry, agriculture, judiciary and arts fields besides those working in administration and retired officers. These meetings were held one-on-one, or in groups or by paying visits to their families. Prominent amongst those were revered Swami Suprakashanand ji of Ramakrishna Mutt, Vrindavan, Sri Rameshbaba ji of Vrindavan, Swami Pragyananand of Puri, Sri Umeshnath Yogi of Valmikidham, Ujjain, and revered Mahant Swami of Akshar Purushottam Swaminarayana Sect. Sarsanghachalak ji also met Sri Pratap Reddy of Apollo Hospital of Bahgyanagar (Hyderabad), Mohan Reddy of Infotech, Padmashree T V Narayanan and Sri Raju of Nagaraju7na Group. Padmavibhushan Ratan Tata visited the Nagpur Sangh Karyalaya and met Sarsanghchalak ji. In Gujarat, Vasada State Maharaja Sri Digvijendra, Sanjay Lalbhai of Arvind Group and Karsanbhai Patel of Nirma Group called on Dr. Bhagwat. He had the opportunity to meet and enjoy the classical Dhrupad music from Gundecha brothers and their colleagues in Ujjain. During his Odisha tour, Sarsanghachalakji visited Khinda village near Sambalpur where famous freedom fighter Surendra Sai who was martyred on 28th Feb 1884 in the Asirgarh fort where he was incarcerated by the British. P P Sarsanghachalakji met with his descendants on the occasion of the martyr’s birth anniversary. During his tour of all the 11 kshetras, special programs were also arranged in addition to regular organizational work, and meetings of karyakartas. Notable amongst such programs are ‘Arun Chetna’ Sammelan and Indigenous Faith Leaders’ Meet held in Itanagar, the capital of Arunachal Pradesh, ‘Shankhanaad’ in Jammu, district congregation in Thirunelveli in Tamilnadu, ‘Nagar Sanghik’ in Jamshedpur and ‘Sanghik’ of Professional youth in Bhagyanagar. The ‘Gana Samata’ (Platoon Drill) in Nagpur Mahanagar and Vibhag Congregation in Bhilwara also need special mention in this list. Besides these, meeting of CAs in Nagpur, Yuva Sewa Karyakarta meeting, felicitation of sportspersons in Vidarbha organized by Krida Bharati in Nagpur, Veer Mata Samman organized by Vishwa Mangalya Sabha, gathering of lecturers in Agra and gathering of newly-wed couples by Kutumb Prabhodhan also deserve mention as special programs.

Tour of RSS Sarakaryawah Suresh Bhaiyyaji JoshiDuring the tour of Sarkaryawah some programs were held by Sampark Vibhag, Dharmajagarana Samanvay Vibhag etc. besides organizational meetings. 1. Interaction with young entrepreneurs was arranged in Mumbai. A total of 57 young entrepreneurs were present. The interaction revealed that they had been curious to know and understand the RSS. Monthly get together is conducted since last year. 2. Two programs with intellectuals and doctors were held in one ‘Bhag’ of Nagpur Mahanagar. The attendance was 136 intellectuals and 142 doctors respectively. 3. A meeting of ‘Samrasata’ karyakartas engaged at block levels in Muraina Vibhag of Madhya Bharat Prant was held in which 3623 karyakartas from 333 villages and 1706 from 99 urban bastis were present. 4. In Chennai, 102 intellectuals participated in a seminar. Meetings were arranged according to different activities and liking. The participants gave positive indications to share the responsibilities in future. 5. A study group of karyakartas involved in Dharma Raksha Samiti activities in rural and urban centers of Malwa Prant was held under the auspices of Dharmajagarana Samanvay Vibhag. This was attended by 3593 karyakartas coming from 938 places. 6. A seminar on ‘Changing Scenario of Cities with reference to RSS work’ was organized at Indore in which 42 intellectuals participated.

Karya Vibhag Reporting Sharirik Vibhag: The Akhil Bharatiya Sharirik Varg held once in five years, was organized this year in November 2016 at Bhusaval in Devgiri Prant. 430 karyakarthas from 40 Prants participated. Besides regular subjects, practice sessions for dand, padwinyas, yogasana and various games useful in the conduct of daily shakha were also held. P.P. Sarsanghachalak Mohanji Bhagwat and Sarkaryawah and Sah-Sarkaryawah Bhagaiahji were present to guide the participants. Bouddhik Vibhag This year training workshops for activists of Bouddhik Vibhag were held in 33 Prants with a total participation of 1483. Five training camps attended by 311 selected Karyakarthas were held. 24 Prants have decided to implement ‘Bouddhik Yojana’ as per different age groups. Separate ‘Bauddhik Pustika’ is published in six prants. Sewa Vibhag: Almost after a decade’s gap, a three-day study-group meeting of Prant Sewa Pramukhs was held at Kanyakumari. P.P Sarsanghachalak and Sah-Sarkaryawah Sri Dattatreya Hosabale provided the much needed guidance to the participants. Prachar Vibhag Prachar Vibhag conducted the following programs in the year Narad Jayanti: A total of 187 programs were held on Narad Jayanti to felicitate 756 journalists. These programs were attended by 20183 citizens and 6137 scribes. Sale of literature: 6.17 lakh books worth Rs.1.40 crore were sold by 31622 karyakarthas in 38 prants. The Jagarana Patrika reaches to 35 percent villages. The Vishwa Samvad Kendra is active in 20 places in the country. This year, Prachar Vibhag organized shortfilm exhibitions. At the National Level exhibition 103 short films were screened in Indore and state level exhibition were held in Telangana, Kerala and West Bengal. Plans are afoot to hold such exhibitions at some other places next year. Curiosity about RSS is continuously increasing amongst the educated youth. There is a considerable increase in the use of RSS’ official website. Over 4 lakh have joined the facebook community taking the total number to 12 lakh. Sampark Vibhag Workshops and training camps for Sampark Vibhag karyakarthas were organized at Kshetra and Prant levels. Contacts were established with the prominent persons, institutional heads and sympathizers on various occasions. Everywhere the goodwill for RSS was visible. Plans were made to contact prominent personalities during the tour of P P Sarsanghachalakji. Accordingly, meetings with leading personalities were held with most constructive discussion and consensus on major national issues. All the prants are taking measures to observe Sampart Din (Contact Day) in the year. Educative programs and book release were being organized at district level. One such program was held in Mehsana Vibhag of Gujarat where a day-long workshop was held. Over 500 prominent persons participated in this program. Programs to deliberate on and analyze the issues touched in the Sarsanghachalakji’s annual Vijayadashami address were held at Delhi with select participation. This year such programs were held at some more places. Mananiya Sarkaryawahji attended such program in Mumbai and Pune, while Sah-Sarkaryawah Dattatreyaji, Bhagayyaji and Krishnagopalji participated in Bengaluru, Chennai, Jaipur, Bhagyanagar and Chandigarh respectively. It is planned to organize such programs every year. 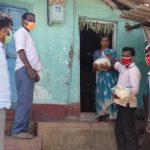 Honesty and caring for others in Bharatiya society : Video story from Bhadravati 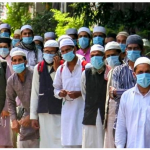 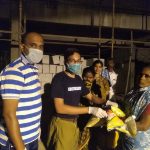 Ensuring no poor suffers of hunger: A peep into RSS Service activity in various parts of Karnataka


Photo of the Week