Centenary celebrations of Daly Memorial hall was held at Mythic Society on Nrupatunga Road in Bengaluru today. A seminar on Contribution of Mysuru Kings in the development of Mysuru state was also held on the occasion.

The event began by traditional lighting of the lamp by the Maharaja Yaduveer Wodeyar. Dr. Giridhar Upadhyaya, Member, Managing committee of Mythic Society conducted the proceedings of the event.

Shri. V Nagaraj delivered the welcome address. He gave the overview of the Daly Memorial Hall, its history and significance. He also described the architecture of the hall which is built in the Greco-Roman style and mentioned about the natural colors used in the wall paintings, the traditional tiles used on the floor and the natural acoustics of the hall. He recalled how Maharaja Nalwadi Krishnaraja Wodeyar donated land for the hall and the contributions of others like Shri. Vishweshwaraya. He then highlighted the contribution of the Mysuru Maharajas in development of various fields in Karnataka. He gave a brief introduction to Maharaja Yaduveer’s educational background and interests.

Prof Narahari who presided over the event formally welcomed Maharaja Yaduveer by presenting a bouquet and a gift.

A souvenir commemorating the occasion was released by Maharaja Yaduveer at the event. The souvenir was compiled by Dr. Kotresh of Tumkur University. Dr. Kotresh gave a brief introduction to the contents of the souvenir. The souvenir contains research articles about the Maharajas of Mysuru and their contributions in various fields.

Maharaja Yaduveer addressed the gathering and expressed his happiness about being part of the celebrations. He highlighted the institutions built by the Maharajas in Mysuru state whose sole aim was to contribute to the society. He further stated that, we not just learn from history but also borrow from the future.  Hence we have the responsibility to ensure that these institutions are patronized by all of us in the future too. Only by building institutions and maintaining such institutions like Mythic Society we ensure that our heritage is safeguarded. He concluded by saying that he would continue to patronize the activities of the Mythic society in his capacity.

Prof. Narahari recalled the contributions of all those who were instrumental in building the Daly Memorial Hall, including few British officers like Daly and Maharaja of Mysuru. He spoke about the ups and downs faced by the Mythic society. He recalled how during emergency the government had taken over the premises and was about to sell it to another institution. Mythic society has survived many such challenges including financial difficulties and has come out a victor he reminisced.

A coffee table book containing select photographs of Mysuru Maharajas was gifted to Maharaja Yaduveer on the occasion. Raja Chandra, son-in-law of Jayachamarajendra Wodeyar, last king of Mysuru state who was present was introduced to the audience and was felicitated on the occasion.

Seminar on contribution of Mysuru Kings in Development of Karnataka

A seminar on the contributions of the Mysuru Maharajas in development of various fields in Karnataka was held on the occasion. Prof NS Taranath was the moderator for the seminar.

Contribution of Mysuru Kings in Social and Cultural spheres

Dr. JV Gayatri provided an overview of the contributions of various Wodeyar Kings in the field of art and culture. Beginning of Dasara, building the Attara Kacheri, support for art, literature and other traditional art forms were highlighted by Dr Gayatri. Garett House was brought from the British which was later converted to the present Bengaluru Palace. Infant marriage regulation was enacted  by Nalwadi Krishnaraja Wodeyar to curb child marriage. Translation of various important works in other languages to Kannada and vice versa was supported by the then Mysuru Maharajas. After Mysuru suffered from plague, Maharaja Nalwadi Krishnaraja Wodeyar brought in an act to control communicable diseases and also to de-congest cities. It was due to this act that cities like Bengaluru expanded and cleanliness was given prominence.

Other facts highlighted by Dr Gayatri was the starting of Vidhana Parishat  in 1907 by Nalwadi Krishnaraja Wodeyar. He also started many schools where thousands of students had enrolled for formal education. He gave importance to disadvantaged sections of the society by forming trusts for various communities. Hostels for SC communities were also started in Mysuru state. Many industries in ceramics, iron and steel, soap and many other industries were started during his reign. Land for prestigious IISC was given by him. Kannada Sahitya Parishat, National High School, Institute of Commerce were all instituted under Nalwadi Krishnaraja Wodeyar. Railway link between Mysuru and other states was constructed during his rule. He gave impetus to intellectual and spiritual development too by supporting institutions like theosophical society, Brahmo Samaj, and Ramakrishna Ashrama. .

She also gave details about letter correspondence of Maharaja Nalwadi Krishnaraja Wodeyar which showcased his concern for common people, art, culture and traditions. He also supported famous painters like Raja Raviverma. Sri Jayachamarajendra Wodeyar was well versed in both Indian and western music. He had composed 94 songs. He built many famous temples in Mysuru. He instituted the Jaganmohan Art gallery.

Contribution of Mysuru Kings in Science, Technology and Industry

Mysuru Lac and Paints Limited that produces indelible ink for Indian elections, advent of electrification, institutionalizing Central college in 1958, laying the foundation for Mysuru University were all initiatives of Maharaja Nalwadi Krishnaraja Wodeyar. He narrated the way IISC was started in Bengaluru to which Maharaja donated 400 acres of land. Land for Raman research institute was given by the Maharaja to ensure that Prof CV Raman stays in India itself and conduct his research. In 1899 Kempa Nanjammani instituted the agriculture research institute near Hebbal where research in soil was conducted by German scientists on the invitation of the Maharani. School of Mechanical engineering now known as UVCE was stared by the Mysuru Maharaja. Govt Sandalwood factory was stared by Maharaja to produce perfumed soap. Imperial institute of animal husbandry now known as national dairy institute, Mysuru lamps, forest research laboratory to conduct research in safeguarding forest wealth, tree diseases, etc, Textile research institute in Bengaluru were all the started due to the vision of Nalwadi Krishnaraja Wodeyar.

Another keystone project initiated by Nalwadi Krishnaraja Wodeyar was the starting of HAL in Bengaluru in 1948. It was the first Public-Private partnership in the true sense, a concept which is prevalent today for most turnkey projects. Govt electric factory, Kolar gold mines, Bhadrawati iron and steel works were all started and supported by Mysuru Kings. We should be thankful to have been born in such a land he concluded.

Prof. Taranath in in presidential speech talked about how the Mythic society has served the purpose for which it was instituted. The events of the day and the seminar too was in support of the aims of the Mythic society. Arts & culture and science & technology are like our two eyes. Both speakers who spoke on the respective subjects very rightly highlighted the contributions of Mysuru Maharajas in various fields. He spoke about the vision Maharajas had while taking decisions and taking the state forward. Their vision was to safeguard culture and traditions but adopt modern technology in the same spirit. Maharajas not just supported literature but created many works of literature  themselves in fields of music, sports, etc. The maharajas were patron of epigraphy, archaeology, and were forthright in safeguarding historical buildings too.

Oriental research institute which was instituted by Maharaja Chamarajendra Wodeyar was instrumental in securing and curating 70000 ancient scriptures among which Chanakya’s Arthashastra was the most prominent. Translation of Sanskrit texts was undertaken by Jayachamarajendra Wodeyar. Raja school now known as Maharajas college was open for all sections of the society. Educational institutions which had English, Kannada and Sanskrit as the medium of instruction were also stated. Importance to female education was a legendary step. Impetus to health was given by starting hospitals like Victoria hospital, Cheluvamba hospital, etc.

He stressed on the fact that all round development happened under the Mysuru Maharajas. He concluded by highlighting that decentralization was practised by the Maharajas so that different areas of the state also develop and provide employment. Their vision and work showcased India to the world. Their contribution to social justice as legendary. Starting the Vidhana Parishat by Chamaraja Wodeyar which has 340 representatives was truly a monumental move. The Parishat accommodated representatives from all sections including Dalits, Christians and Muslims too. This showed their commitment to social justice. He urged Mythic society to compile a bibliography both in English and Kannada about the books and works on Mysuru Maharajas which could serve as a ready-reckoner to know more about the Maharajas of Mysuru, their work and contributions in various fields. 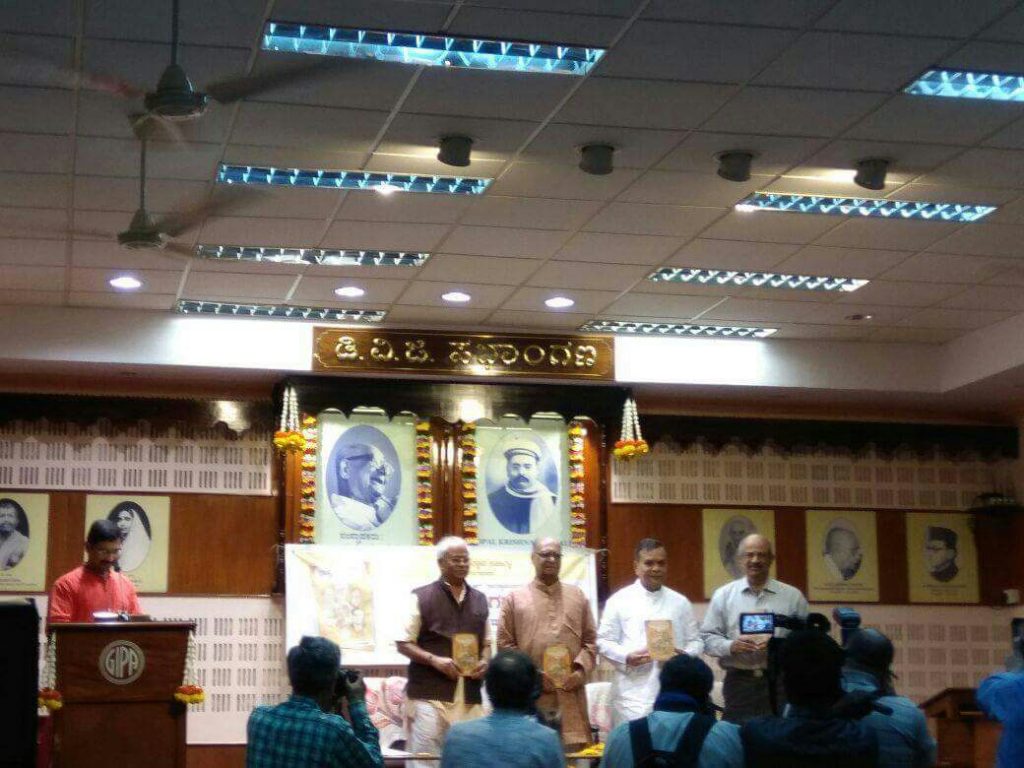