‘Since 1991, the new economic policy was adopted, Western development model is being rampantly used in India. The misconception that development is possible by capital, free trade and establish MNCs to grow. The developed countries who wanted to teach us this economic policy now are pulling away from the same. SJM was totally against this policy and we were booed down saying we would push economy of the country to stone age. However now Europe is also fearing fear trade, America and Europe have declared openly that mechanization is needed and not free trade as they also facing the brunt of China products.’ Said Prof Mahajan in his address.

He explained, ‘Beneficiary of free trade so far was only China. Manufacturing industry is going under heavy loss in these developing countries and so in Bharat, illegal trade is at the peak and sadly it is not export and import with China but we have entered as prime importers of cheap products. The data is clear that we have been importing so much so that not even part of it is being manufactured in Bharat and that is the real fear to the nation. If we reduce this import we will be able to revive our industries and employ our youth.’ A Chinese manufacturer in China is not free to market outside. He sells it to PSU and PSUs push it to other countries with a considerable loss which explains the reason for the economical goods, the loss which Chinese government takes up openly.

Mahajan was clear that any government in power cannot blanket ban all Chinese products for this large a country. It could be due to the international trade laws and other commits and it is now that WE the citizens have to support the government on this regard and in the current scenario,

Indian Government recently has issued Anti dumping duty for items coming from China which was in turn due to the petition by manufacturing industries and imports from china have reduced by 43%. The numbers will go up in future’

Rajya Sanghatana Karyadarshi of Swadeshi Jagaran Manch, Sri Jagadish K was also present. He introduced to the audience the motto and the need of such an organization for the nation in today’s world of globalization. ‘Western development model which we have been embracing  is failing democracy in India. The concept of ‘One shirt fits all’ will never work. We have entered globalization and  Bharata vikasa model which includes reviving small scale industry, Grama Swarajya, imbibing moral values would be the solution to bring back Indian economy back to track.’ Jagadish said. 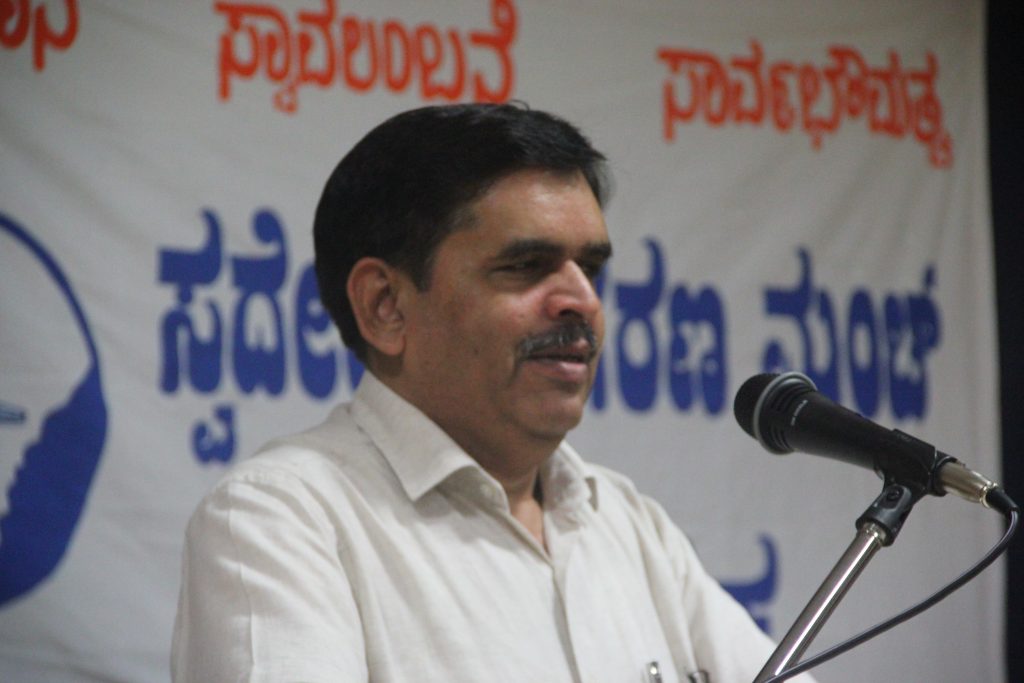