Mangaluru, Karnataka February 05, 2017: Vinayak Rao’s disability, illness and the resulting helplessness can only be understood by somebody who has experienced similar anguish.

Rao of Kanyady village in Beltangady Taluk of Dakshina Kannada district in Karnataka was only 26 when he got electrocuted, and the injury in his spinal cord left him immobile from waist down.

But he did not let his disability become his weakness and today he is helping many others like him. Whether they are victims of endosulfan (a toxic pesticide) poisoning, people with physical and visual disabilities, poor farmers or students. His organisation, Seva Bharati, has helped 510 endosulfan victims up to the age of 65 years in receiving cashless health insurance coverage with a reimbursement ceiling of up to Rs 2 lakh at the first camp organised in November.

Under this facility, an endosulfan victim could avail treatment at any hospital. “The patient is not burdened as expenses incurred never crosses the Rs 2 lakh ceiling,” says beneficiary Sreedhar Gowda of Kokkada Endo Virodhi Horata Samithi.

An endosulfan victim pays Rs 100 as annual premium and Seva Bharati contributes remaining Rs 255 to the insurance firm, New India Assurance Company. “Victims up to 18 years old, who were left out in the first camp, will receive health insurance in the second health camp in February,” he says.

On learning about Rao’s initiatives for the differently-abled, Bengaluru-based Association for People with Disability (APD) tied up with Seva Bharati to give wheelchairs to 10 poor elderly citizens. The wheelchairs were distributed during a programme at Kanyady School in his village in November.

Since January, Rao’s group in association with Audio India Trust has been conducting camps and disbursing aids to hearing impaired youth.

With a longing to help the needy, Rao launched a farmers’ forum, Dharithri Krishi Sangha, to encourage practices such as rain water harvesting and zero budget natural farming. Due to his efforts, 640 members joined hands to launch Dharini Coconut Growers Federation.

“Under our Jnana Bharati programme, libraries in 21 schools get good books, six schools get note books worth `20,000 and toilets are made in five schools, every year,” he says adding that most of the money for these works comes from donations.

“The expenses on logistics are reduced to minimum with women members of SHGs volunteering to work, cook and share profits from their economical activities,” says Rao, who has 1,000 rubber trees spread in a sprawling area of 20 acres.

Recollecting the tragic accident, Rao says, “I could not come out of depression for the next five years after the accident in 1996.” At that time, a word of advice from an elderly activist, Krishna Bhat, helped me.

“Bhat told me to stop thinking about myself and start thinking about society,” he says. And there was no looking back for him. “I am alive because of the activities of Seva Bharati,” he says as his bespectacled chubby face beams. 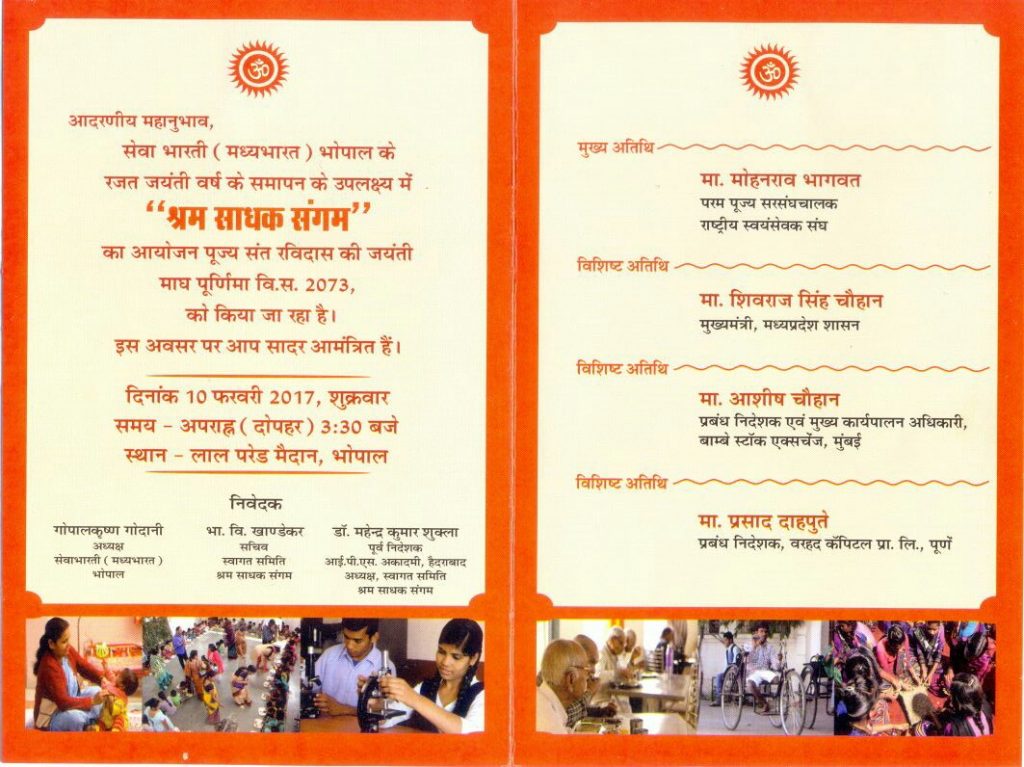