Suresh Soni was speaking while delivering the keynote address in the special program organized during the All India Convention of the Samskrita Bharati.  Shri Shri Vishweshteerth Swamy, the pontiff of the Paryaya Shree Pejawar Adhokshaja Mutt, Udupi, Shri Shri Nirmalanandnath Mahaswami of the Adi Chunchungiri Mahasansthan Mutt, Shri Dharmapalnath Swami of the Shakha Mutt, Bhaktvatsal Sharma, the newly elected national president of the Samskrita Bharati and Pramukh M. B. Puranik, Karyadarshi of the Welcome Committee of the convention were present on the Dias. RSS Sahsarakaryavah Suresh Soni spoke on the subject ‘Samskrit Bharatam, Samarth Bharatam’. Qquoting Will Durant, he said, “India is mother of all. In the thousand of years of journey, there are bound to be ups and downs. Today’s India is a mixture of two streams – there is a weak but thriving spiritual tradition while another stream is of the customs and beliefs inherited from the aggressors for the thousands of years. The national men and the spiritual men are the first need of a strong India”.

He lamented the fact that India is an unfortunate country where people question even the idea of nation. The Vedic literature gives us the definition of our nation. Whatever contained in the ancient literature guides us at every step to solve today’s problem. When Pittman invented the shorthand by converting sound into script, he had acknowledged that he had turned to Samskrit for this. A strong, virtuous India is today’s need, but an India that guides the world is the utmost necessity.”

He called for removing the inferiority complex from the countrymen saying that the nation has become defensive owing to the aggressions for over a thousand years. “The misconception that the Indian philosophy teaches us only asceticism has to removed. And we don’t need to bring anything new to do this. Nowadays, people talk of plularism but the pluralism is a Semetic concept because that tradition insists on the uniformity. However, we accept the plurality as a manifestation of the one”.

The nation needs to be remembered of various Sanskrit mottos of government and the various departments that our constitution makers have given to us.”

He enthused over 2000 Samskrit Bharati workers gathered all over the country saying that there was no need to be dejected by the unfavorable circumstances. Our Late President Dr. A. P. J. Abdul Kalam had once said that ‘if you spiritualize the religion and nationalize the people, all problems will be solved’.

At this occasion,  Shri Shri Nirmalanandnath Mahaswamiji of the Adi Chunchungiri Mahasansthan Mutt said, “By the way Samskrita Bharati is working, we can certainly bring a change in the system. This is the time to change our educational system. Our university students should be taught what our ancestors have given us so far”. 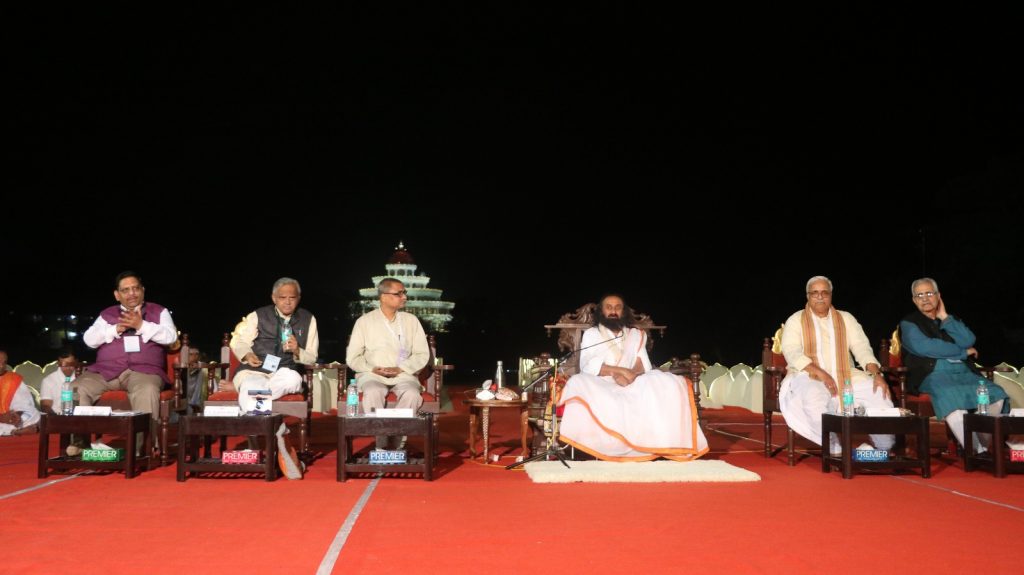