Sept 10, 2017, Hyderabad : Making a call for drawing deep out of the wisdom of our seers, Dr. Mohan Bhagwat, Sarsanghchalak of the Rashtriya Swayamsevak Sangh said that our NeetiShastra has a lot to offer which modern day law makers should take a leaf out.

He was speaking at the valedictory program of the Silver Jubilee celebrations of the Akhil Bharatiya Adhivakta Parishad held at Saroornagar Indoor stadium at Hyderabad on Sept 10th, 2017.

For running a society, laws and legislation are necessary, in addition to it, we must build such a society where morality of the society is at a level where the society in general and laws are not at loggerheads with each other.

The Adhivakta Parishad was formed in 1992 under the guidance of Sri Dattopant Thengadi during a time when the Shah Bano Case judgment, Ramjanmabhoomi issue and the discussion on Hindutva was raging. The nation was in a huge debate as to who were as a nation. Couple of  key functions of the ABAP was to fight many of the legal issues that were emerging during such time and also to give voice to the millions of the people who could not afford legal assistance. The gap between those to whom justice is not accessible should be reduced.

Dr.Bhagwat said that the enforcement of law is necessary, but it will be 100% effective only when there is education of the masses; Secondly this education cannot be just by information, but should be equipped on moral values. Thirdly, unless we develop examples of honesty by living Bharatiya values by ourselves, we will not be able to transform society.

Pitching for reforms in the law, he said, while our constitution was written based on the understanding of Bharatiya ethos of our founding fathers, many of the laws that we are still using are based on the foreign sources. This is something we must address he added.

Our justice system’s ambit is under legal framework but many a time what is legal may not be morally right. For example, during Emergency, police had the right to shoot anyone and no one one was accountable to the answer for such act. Legally the police was right but morally?

In our society, Dharma was placed highest as it stands on the pillars of truth, unlike western society which believed that the king as supreme and could do no wrong.

He pitched for working for transforming our legal system by working towards solutions that the poor and deprived are facing. He also appealed to the members of the legal fraternity to help those in duress beyond the boundaries of ideology. He also further added that for more introspection in those in the higher echelons of the legal system stating that an error of character of those at higher levels have a more impact on society.

Finally, he said transformation without destruction is possible only by association of people committed to a positive change and each one in the society must work towards this.

Sri Justice L.Narasimha Reddy , Chairman of Reception committee said modern law does not have a proper definition of how a judgement must be but ancient texts like Vyaasa’s Dharmakosa was able to deliver the same. Thu Sep 14 , 2017
Bengaluru, Sept14, 2017 :Citizens of Democracy (CFD) has requested Ministry of HRD to take strict action against a grave dereliction of discipline and conduct by the NCC Unit of the St. Joseph’s Institutions, Bengaluru, wherein the said unit has participated in a #IamGauri political protest march in against the Union Government […] 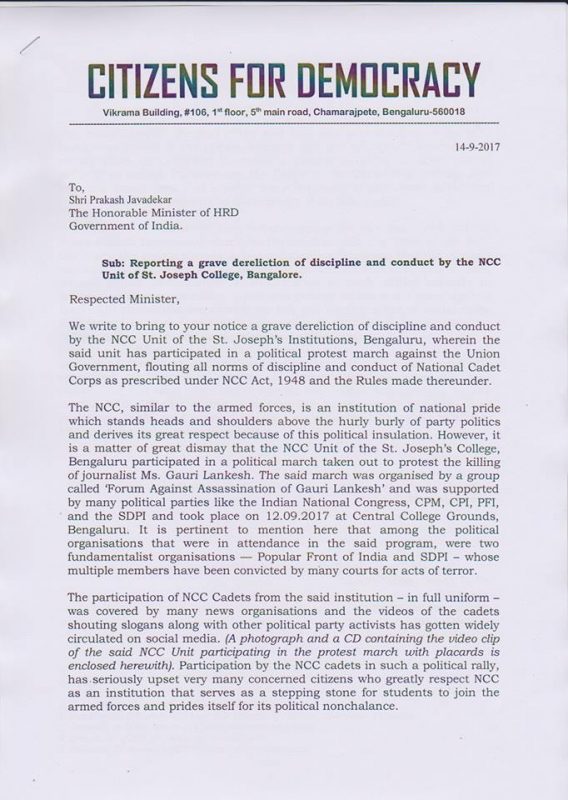