Bengaluru, 4th Nov 2017: FIRST (Foundation for Indic Research and Studies) had organized a seminar today in the city to understand the mindset of Tipu and his followers at Gandhi Bhavan, Kumarakrupa Road. In a packed auditorium, Dr. Sambit Patra, Dr. G B Harisha, Sri Sandeep Balakrishnan,Sri Robert Rosario presented their stand and protested the State Government’s decision of commemorating Tipu Jayanti having known his history of mass murders, Jihadi mindset and cruelty. Striving hard to portray good light on Tipu Sultan and showcasing his “pride”, Karnataka Chief Minister has failed to oppose the humiliation meted out on Field Marshall K M Cariyappa by his own partymen whose ancestors had also experienced Tipu Sultan’s tyranny said Dr. Sambit Patra, National Spokesperson, BJP in his address to the audience on the seminar to understand the mindsets of Tipu and his worshipers. Army Chief Gen Bipin Rawat who was in Coorg to unveil the statue of FM Cariyappa had recommended Bharata Ratna to the warrior and some Congress leaders had gone critical about Gen Rawat’s comment.

Invaders are glorified and Tipu is the Aurangzeb of the south he argued. Tipu stood terrorizing the parts of Malabar, Mangaluru and he is considered in history to have been much harsher than the Ghazni, Ghori, Aladdin Khilji he added. CM Siddaramaiah also being from Mysuru belt of Karnataka where Tipu ruled, celebrating his Jayanti without knowing him is tough to believe and if knowingly he is celebrating is only committing sin to the people of state he said. Tipu is known for his desecration of temples in the south. CJ Justice Mukherjee of Karnataka has observed that Tipu was not a freedom fighter but a monarch who wanted to safeguard his kingdom. Letters written by him to other Nawabs, contemporary historians, his army, diary go to validate that he was a tyrant and a staunch Muslim who devoted his life to convert people to Islam by force. But Siddaramaiah feels it is the communal forces who have written ill about Tipu Sultan. Mir Hussien, a courtier of Tipu has documented how 8000 men women were either converted to Islam or butchered. The fear he had instilled in people’s minds in Coorg had made the people remove the gopura and have an Islamic dome in the same place so that the temple would not be demolished like the other ones. But with all proofs on the table the pseudo secular brigade is garnering on the votes and is hell bent on to celebrate he added. He remembered how the ideological bereft Congress politicians wanted a Muslim only University on Tipu’s name and had also in the past were trying to protect Islamic televangelist Zakir Naik, respecting Hafiz Sayeed as Ji, Sir and many more!

He also questioned the State Government of Karnataka’s reason behind withdrawal of hundreds of cases on PFI miscreants despite police warnings who were and are treading the path of Tipu Sultan in killing innocent people and the action of banning it is the need of the hour.

Truth has to prevail and lies should be exposed failing which would give way to pseudo historians to distort the history said Dr. G B Harisha, author and researcher in the seminar today. He gave a call to the people to build small study groups to learn and dive deep into historical facts for the ultimate reason that the truth wins every time as well as to learn from our own mistakes of the past. Reading texts by Swami Vivekananda, Bankima Chandra Chaterji, Dayananda Saraswati, Aurobindo, Ram Swaroop, SitaRam Goel by the current generation would be a saviour he added. Gandhi Jayanti, Buddha purnima, and Tipu Jayanti cannot go together as non-violence and violence cannot go together he said. Kodagu warriors who have fought Tipu, or in the modern day wars with Pakistan, Bangladesh name the dog at their house as Tipu and that being the caliber of Sultan are we in any need of a Jayanti for him questioned Dr Harisha. He said how his death was not of a warrior and celebrating him without adequate knowledge would be harmful to the society. As termed as eminent historians by Arun Shourie, they who looted the public money and instead of speaking the truth have only resorted to blatant lies and glorified some who should not have been post independence under Pandit Nehru’s guidance opined Dr. Harish.

With lot of proofs on the atrocities committed by Tipu the question arises as to why he had to do it and the answer clearly is to prove himself a good Muslim. The same would hold good for the acts of Osama Bin laden, Ajmal Kasab, Burhan Wani etc who had the burden on them to lead the life of a true face of Islam. If one fails to understand what Islam is, he cannot understand Tipu said Harish who added Islam is Imperialistic ideology unlike Dharmas born out in Bharath. Hadis, Quran have indoctrinated thoughts which brings cold shivers resulting in misery, blood, death uprooting culture, art, philosophy, literature, music and also chastity of our sisters and erasing a lot of civilizations. Achieving Dar ul Islam has been the end goal and drawing the whole world under Allah and nobody else is what it aspires. It is sad to say that the debate is not possible under Islam and they believe that one could appreciate and is free to speak high about Islam but at any cost cannot protest against it. Incidents like the Charlie Heb do only substantiate the same point and so delinking the the Muslim community from Islam is the need of the hour he concluded. Robert Rosario, social activist and a Christian leader said that the conspiracy of silence by the Christian clergy and political leaders ought to be questioned and there is no respite to them claiming this as political where actually the issue was more cultural.
No single person has done damage to Konkani speaking Canara Christians in the history of 500 years as much as that done by Tipu said Rosario in his talk. He remembered the stories which were told by his grandparents who in turn inherited from theirs who were the direct sufferers of the tyranny of Tipu Sultan. He said from Sunkeri to Karwar close to 27 churches were razed to ground an extent that no proofs existed that the churches earlier stood. Be it Gadaikallu or Nettarakere which translated to a pool of blood thousands of people were barbarically killed. Rosario went off to say how 25000 Chistians from the Coast who he felt as informers to British were ruthlessly treated after held captive while after Tipu’s death in 1799 followed by the release only 1/4th of them reached their homes in Mangaluru. He attacked the mindsets of leaders, like Ivan D Souza, Oscar Fernandes, JR Lobo who also knew such facts but remained mum and questioned the conspiracy of their silence. He said the Bishops in Karnataka and most parts of India were from Mangaluru region and none of them have raised their voice when the state is commemorating Tipu’s Jayanti third time in a row. Learning history and propagating the truth to many would be the need of the hour he concluded. Sandeep Balakrishnan, author of the bestselling “Tipu Sultan : Tyrant of Mysore” condemned and questioned the ideator of a University for Muslims – Rehman Khan in the name of the mass murderer Tipu Sultan. He feared how the brazen attempt of the secular politicians to worship Tipu would eventually see a logical conclusion in going hand in glove with those who had instituted Osama Bin Laden award for peace. Quoting from the history, Sandeep remembered how the Melkote Iyengars were butchered on the day of Deepavali and the CM of the state bothered less about this when he had to think about Tipu Jayanti. He quoted how the mindset of appeasing had its history in India and even Dr. Babu Rajendra Prasad appreciating Jinnah or Pandit Nehru asking for the house adjournment for the death of genocidal maniac Stalin or his statement terming Hindu right wingers as threat were never questioned by us. The mindset of Tipu and other Muslim invaders who have looted and ruled this country be it Alladin Khilji, Ghazni, Ghori, Taimur, Babur, Aurangazeb had a primary goal which was to establish a Islam dominated state and their merciless act of demolishing temples, converting people to Islam, killing people as they were Kafirs is to be understood he said. The good thing that these are recorded by the ruler also and those who wrote chronicles. Post Independance, Heroes were made out of zealots, bigots, thanks to the secular politics of Nehruism he added. Sun Nov 5 , 2017
Jaipur, 5th Nov 2017 : Mega RSS Ghosh ensemble of 2017 was held in Jamdoli, Jaipur. Swargovindam samaropa samarambh was held at Chitrakoot stadium on November 5, the third day of the camp where thousands of Ghoshvadak Swayamsevaks who were part of the camp in Keshav Vidyapeeth, Jamdoli from November […] 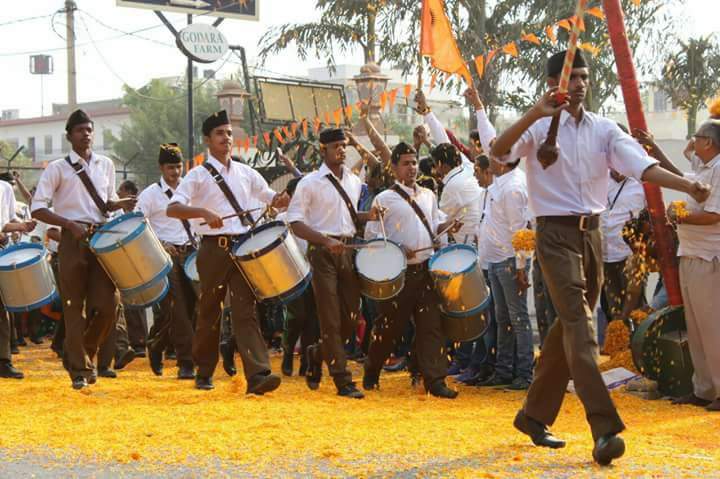