This article is from the archives of ‘Organiser’ which was recently published in their magazine. This is published in samvada.org to commemorate the 112nd birth anniversary of Guruji, the 2nd Sarsanghachalak of the RSS.

“LEADERS in different spheres of social life there may be many, but there is only one person who has “seen life steadily and seen it whole” and speaks the truth, the whole truth, and nothing but the truth, without fear or favour—and it is Shri Madhavrao Golwalkar the Sarsanghchalak of the Sangh”

“ I respect Guruji in his individual capacity, and not as Sarsanghchalak of the Sangh,” a certain gentleman declared, who considered himself opposed to the Sangh. It is not unusual for people to say so. On the other hand, in 1948 when people said the Sangh was good and so were the Swayamsevaks, but they were being misled by their leader. The sentiments differ, but the approach is the same. According to them Shri Madhavrao Golwalkar and the Sarsanghchalak of the Sangh are two different personalities. In my opinion, those who say so have understood neither the Sangh, nor Sri Guruji.

When I say Sri Guruji has no existence (apart from his responsibilities as Sarsanghchalak I do not mean to say he lacks a great individual personality. On becoming Sarsanghchalak he had observed, “This is the throne of Vikramaditya; even a shepherd’s child occupying it will be a paragon of justice.” In all humility he had compared himself to a shepherd’s child, but there must be no mistake about the fact that his greatness is due not to the throne he occupies but to his intrinsic greatness. But all h i s greatness he has merged in the mission of the Sangh—and that is the key to his personality.

It was in 1938, in the life-time of the late Dr Hedgewar. Sri Guruji was the “Sarvadhikari” of the Nagpur OTC. The trainees had collected a presentation purse for Doctorji. Everyone gave according to his faith and none know who gave how much. But one Swayamsevak, in stead of contributing to the purse, presented Doctorji with a gold chain as a symbol of his respect. At the presentation ceremony of the purse and the chain we all praised the particular Swayamsevak and considered him the hero of the day. But in his speech as Sarvadhikari, Sri Guruji said, “I know the Swayamsevak who gave the chain has great regard for Doctorji. But he is still not a complete Swayamsevak. He has not yet merged the ‘I’ in him. The ‘nidhi’ was a merging of individualities, but this particular Swayamsevak’s desire to give something apart from the purse means he has not yet conquered his ego.” The words opened our eyes, and taught us an unforgettable lesson about the necessity of merging one’s self in the Sangh to qualify as a full Swayamsevak.

Sri Guruji’s life is a living instance of complete identification of an individual life with the Sangh. It is no easy task for a person to identify himself without reserve with an ideal, especially when he is the head of the body. Whenever an individual faced with a conflict between the individual and the corporate, his simple solution is to follow his leader. But for the leader the only source of guidance is his soul. Sri Guruji has conducted the Sangh with the interests of the body social before his mind. Some people dub Guruji a dictator in view of this firmness and insistence on principles, because either they do not understand him or want him to conduct the Sangh for the sake of less than national interests. But he is miles away from such an approach. He has no opinion of his own. What the Sangh stands for is his opinion. And what we think, the Sangh thinks, because there is complete identity between the two.

“WHEN the Sangh was banned, it was painted as Satan, and when the ban was lifted paeans were sung in its praise. But both were the same thing to Guruji”

There have been many occasions when he has kept national interests above individual or organisational interests. In 1948 when the Sangh was banned, he could have, if he were so minded, defied the Government and launched a struggle. But instead he dissolved the Sangh and gave proof of his pure patriotism. After the ban was lifted he was given a tremendous ovation all over the country. The mammoth public meeting in Delhi was enough to rouse the ego of the greatest of saints. But Guruji said in that meeting, “If our tooth bites our tongue we do not pull out that tooth.” People were astonished. They had expected a ringing denunciation of Government’s injustice and atrocities.But they had not fathomed the depths of his personality. In him there is only all-embracing affection for all.

This all-embracing affection is the source of his greatness and of the universal reverence for him. And his greatness also lies in this that he has preserved that affection. Last year the weekly Yugadharma had published the mottoes of great men. Guruji’s was the smallest and the truest—”Not I, but you.” Who is this ‘You’? It is Sangh, Samaj, God. For him all three are one and worship of any is worship of the other. His life is one long worship.

As a result he recognises nothing except the Sangh. His steadfast eye on the polestar of the goal are deflected neither by praise nor by blame. When the Sangh wsa banned, it was painted as Satan, and when the ban was lifted paeans were sung in its praise. But both were the same thing to Guruji.

“AFTER the ban was lifted he was given a tremendous ovation all over the country. The mammoth public meeting in Delhi was enough to rouse the ego of the greatest of saints. But Guruji said in that meeting, “If our tooth bites our tongue we do not pull out that tooth.” People were astonished

We were reading a newspaper. I had almost completed it from the first page to the last, when Guruji entered the room. Casually he picked it up, glanced through and kept it aside. Conversation turned to news item about the Sangh. “But where is it?” I asked. “In this very paper,” Guruji replied. I had read the whole paper but had not come across it. I Picked up the paper again and looked it over. But I failed to find it. Guruji took the paper and said, “Look here.” It was a very small item—on the commercial page. “What a place!” I thought, “Are we shopkeepers that we would read the commercial page?” But again I thought. : ”That way Guruji too is not a shopkeeper. How did his attention go to price lists? And he had not read the paper with my thoroughness. He had just glanced at the headings—and even the headings were so many that he could not have read them all in the time the paper was in his hand.” I did not express my doubt, but Guruji understood. Casually he said, “A mother spots her child even in a crowd. Friendly words are heard even in a din.” I understood. He culled the news of a newspaper while we wade through statements of leaders. Guruji always says he does not read newspapers. But it is really he who reads-them. We only see them.

Once he picked up a newly published book, glanced through and stopped at random at a page. He read a sentence and said, “What is this?” There was a mistake. Again he fluttered the pages and stopped at another page. There was another mistake. I took the book and went through the whole book. Those were the only two misprints. How did his eyes light upon them so unerringly? It was neither magic nor a fluke. For there have been many similar instances. It is only relentless zeal that gives an unerring eye. That eye sees not only the truth under all circumstances but also penetrates into the future. At first glance his forethought appears strange, but shortly it is borne out by the happenings.

In 1947 he stressed spiritual nationalism, talked about unity, emphasised national character, referred to the limits of politics and called for cultural organisation. In the last years all his observations have been proved true and every new happening proves them the more. Leaders in different spheres of social life there may be many, but there is only one person who has “seen life steadily and seen it whole” and speaks the truth, the whole truth, and nothing but the truth, without fear or favour—and it is Shri Madhavrao Golwalkar the Sarsanghchalak of the Sangh. Sun Feb 11 , 2018
A report by Sri Prashanth Vaidyaraj A talk on ‘Integral Thoughts’by Shri. Ram Madhava, general Secretary of the Bharateeya janata Party and organised by Manthana Bengaluru was held at RV College auditorium on Sunday, February 11th, 2018 on the occasion of Guruji Golwalkar’s birth anniversary. The event began with a […] 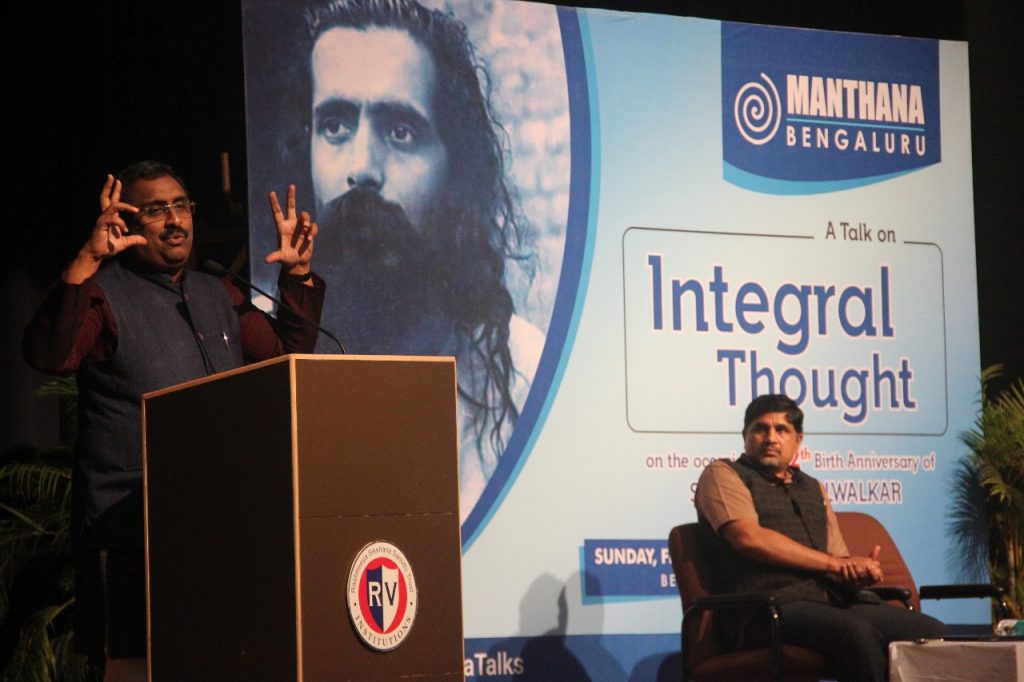