*Prakashji, you played your politics, spewed enough venom of anti-Brahminism, and rained enough abuses against Fadnavis, Modi and Bhagwat but what did you achieve out of them? Its you who need to introspect and find answers.*

Prakash Ambedkar, Jai Bhim! Greeting with Jai Bheem is not my wont, I am habituated to Namaskar, but since you would not accept that, I used Jai Bhim. Namaskar perhaps is a Brahminical greeting term for you. I get innumerous calls from Ambedekarite movement activists and they greet me with Jai Bhim and I respond with Namaskar but they don’t relent until I greet them back with Jai Bheem. I suffer no inconvenience uttering Jai Bhim nor do I have any ideological or emotional inhibitions in saluting one of the greatest sons of our Motherland.

You gave call for Maharasthra bandh on January 3 over the incident of Koregaon but called-off after 10-hours. John Reed wrote a very famous book about Russian Revolution called ‘Ten Days That Shook the World’. After the 10 hours strike, a book with title ‘Ten Hours that Divided Maharashtra’ could be penned.

A reason was desired to give Bandh call and you made stone pelting on people assembled to commemorate the anniversary of the battle of Bhima Koregaon as one.  The vandalism carried out by protestors is indeed condemnable; no one can take law in his/her hands. There cannot be two opinions that legal action must be initiated against those involved. You have every right to protest but where was the need to call for Maharastra Bandh over that issue?

Bandhs have been called over inflation, price rise and sometimes even for border disputes. These issues resonated with every Maharastrian family hence they accepted the associated inconvenience gleefully. But what has been the outcome of your bandh?

Ambedkarites hit the roads at various places on 2nd January even before the formal call for the bandh was given. At around 11, I went to Tarun Bharat’s Mumbai office in Chembur and soon stone pelting and violence broke on roads. Glasses of ST buses were broken, passengers were forcibly evicted, parked vehicles were ransacked, and vehicles parked inside the compound of Tarun Bharat were particularly targeted.

The first obvious question that crossed everyone’s mind after the hysterical vandalism was why ST and BEST buses were targeted? Why stones were pelted on parked vehicles? Every commuter wants to know why were they forcibly evicted? Why those spotting blue flags randomly pelted stones?

Two centuries ago on the bank of river Bheema in Koregaon, a battle took place between British and Peshwas’ armies that marked the end of Maratha rule. Ambedkarites have been commemorating this day as a ‘Day of Valor’ since many years. British army had Mahar battalion that fought valiantly, with many soldiers making supreme sacrifice.  Every soldier martyred in a war is a hero. As important is the fact that from which side he fought, equally important is his bravery. Ambedkar followers have been thronging Koregaon every year to celebrate this day. The history that otherwise was barely known to general public, reached every nook and corner of the country thanks to vandalism during the bandh.

Mahar community is known for its bravery. Their valor in the army of Shivaji Maharaj occupies a special place.  In 1947, when Pakistan invaded Kashmir, Mahar battalion was sent to fight on suggestion of Dr. Babasaheb Ambedkar. Tales of their bravery in the battle to save Kashmir is written in golden letters. The extraordinary courage displayed by brave soldiers of that Mahar battalion is an inspirational saga of patriotism. They (Mahar Battalion) displayed such exemplary valor in Kashmir war that Army officers and even Commander–in-Chief repeatedly praised them publicly saying “Mahar soldiers are best fighter soldier of Indian Army” (Khairmode Part 1, Page No. 276). On 24 December 1947, a fierce battle took place in Jhangar. Brave Mahar soldiers resorted to hand-to-hand combat after they ran out of ammunition and succeeded in halting the march of Pakistani soldiers, for which they war later awarded one Maha Vir Chakra and five Vir Chakra.  Since I am not of Leftist ideology, in my view 24 December is true Day of Valor.

Prakashji, I know you will not celebrate this valor day as this date does not have ammunition of anti-Brahminism. You have already categorized Sangh as a Brahminical organization, hence it also does not have ammunition of anti-Sangh. True, Peshwas are Brahmin by birth. British defeated Peshawas and your historians present it as ‘defeat of Brahmins’.  That is also true to an extent as Peshwas’ rule at its fag end transformed into Brahmanship. Peshwas were not sovereign rulers, sovereign was Chhatrapati on whose behalf Pehswas fought. Hence the defeat of Peshwas in true sense marks the fall of Maratha rule.  We people only know straightforward history. Leftists’ historic uprising goes over our head. Even other common people think like me, I believe.

Who is responsible for the meaningless and needles violence that took place during the bandh? Of course you will not assume any responsibility, instead pin the entire blame on those who attacked the congregation in Koregaon and demand legal action against them. By the way, on this demand dharnas and morchas could have been organized at collector offices across the state. Morchas could have been taken out to Ministries and memorandum could have been submitted to the government. Why were those not even remotely connected with the Koregaon incident, working class people who travel by train, mothers and sistesr who travel by local train, school going kids were held hostage? What did you gain out of that?

Prakashji, you gained two things. First thing – you created your own political space in Maharashtra, something of immense value in politics. Among followers of Ambedkar, your rival is Ramdas Athavale who at times aligns with NCP and on another day boards BJP-Shiv Sena ship. Right now he is a Union Minister. Those in power cannot play the role of the opposition, cannot hit the roads raising concerns of common man. Koregaon presented you with a golden opportunity to challenge Ramdas Athavale, which you ably encashed. That’s indeed is how politics is played. But, what if you were in power and Athavle out of it?

But the price you had to pay to create this space is simply overwhelming. The way society was fragmented during those two days of unannounced and announced bandh, it looks very improbable that the society will re-embrace you so easily. The attempt to give Battle of Koregaon the colour of Maratha versus Dalit has potential to wreck the social balance of Maharashtra. If you pursue only politics of caste, you will go only that far. Never ever in the past Ambedkarites were so isolated from the rest of society and this is so painful. You may say we don’t need other communities, we are self sufficient, the constitution guarantees our safety, we are preserved by the law, and nobody can harm us. This language is good for self-pride but extremely fatal from the angle of creating a fraternal society.

Dr. Babasaheb gave highest place to fraternity in his life.  He used to say “fraternity is another name for humanity, which is again another name for religion”. Speaking in the Constituent Assembly he said “What does fraternity mean? Fraternity means a sense of common brotherhood of all Indians – of Indians being one people. It is the principle which gives unity and solidarity to social life. It is a difficult thing to achieve.” Working for samarasta over the last 30 years, I know how difficult it is to foster a sense of common brotherhood in a society bitterly divided on caste lines. Broad cracks have emerged due to the incidents that took place during bandh.  Looking at the heap of broken glasses on the road, disfigured image of broken feelings emerged in front of my eyes reminding me a tale of Panchatantra.

There was a farmer who used to daily feed milk to a cobra and in lieu received one gold coin from the cobra. One day the farmer had to go to the nearby town for some work so asked his son to offer milk to the cobra without fail. His son feeded milk on the first day and as always rewarded with a gold coin. His son thought if I kill the cobra I would get all the gold coins at one go. Next day he attacked the cobra’s head but cobra bit him and he died. Few days later, the farmer again went to offer milk with a heavy heart and pleaded the cobra. Cobra said, “Friend we cannot be friends anymore. My very sight will remind you of your son’s pyre and your presence will remind me of my broken hood. So we better remain in our confines.”

Prakashji, you played your politics, spewed enough venom of anti-Brahminism, and rained enough abuses against Fadnavis, Modi and Bhagwat but what did you achieve out of them? Its you who need to introspect and find answers.

He has penned over 50 books on social issues and does an elaborate study on the Dr Bhimrao Ambedkar. He was an editor for “Vivek”, Marathi weekly magazine, for long time. He is a member of National Book Trust, RajaRamMohan Rao Foundation, Film Sensor Board. He also bagged Swami Tilak Samarasata Puraskar, Shahanjali Puraskar, Bouddika Yodha Sanman,  Dr Ambedkar Literature award. Since last 30 years he is writing several article in various newspapers. 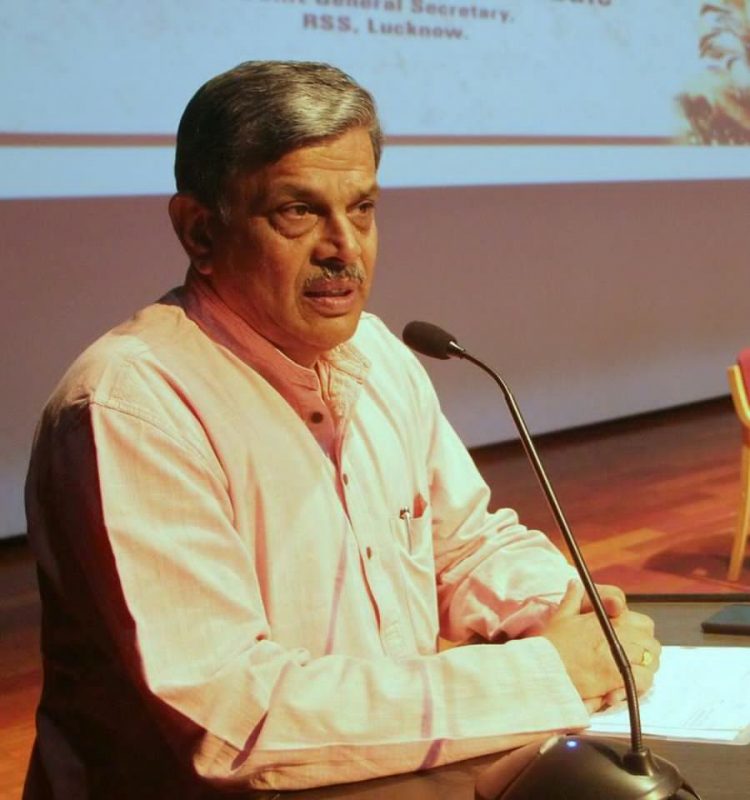