This article written by Prof Rakesh Sinha was first published in DNA newspaper.

Britain imposed World War II on India expecting Indians to show solidarity. The Communists and Hindu Mahasabha actively joined war efforts. However, for different reasons, the Congress showed neutrality. But, the RSS flatly refused to cooperate which infuriated the colonial administration. It was not political clout of the RSS which necessitated to solicit its support but due to the reason which also explains recent remarks of Mohan Bhagwat that RSS possesses potentiality to become part of the national militia in a few days. In the early 1940s, RSS had more than one lakh fifty thousand volunteers. The British military department had realised that RSS volunteers could be quickly trained for military purposes as their regular physical training in shakhas and special training camps which imparted discipline and sense of sacrifice for the motherland. During the war, trained volunteers were required for army, Civic Guards and Air Raids Precautions (ARP). There was no dearth of people aspiring to join the Civic Guards, ARPs or military but that required propaganda to attract youths.

Moreover, their training needed months of time as well as more energy. Therefore, they considered the RSS the most appropriate in the hour of urgency. But their disappointment turned into antagonism when an intelligence report suspected tacit understanding between the RSS and the INA. Eventually, in August 1940, the government issued an ordinance to ban its drill and in 1945 its training camps too were declared illegal. What makes the RSS exceptional during the colonial era was, unlike others, it neither sent any delegation nor any representation to the British government.

The empirical facts endorse Bhagwat’s remark about RSS preparedness to support national emergency. In 1948, when Pakistan attacked Kashmir, large numbers of RSS volunteers were quickly trained by the Army in a few days. During the 1962 war, volunteers participated both in civil and military jobs. It was this impressive role of the RSS that led Jawaharlal Nehru to change his views on the Sangh and invited it to join Republic Day parade in 1963.

Again, during the Indo-Pak war in 1965, spread over 22 days, RSS volunteers had performed exemplary work. They efficiently managed emergency services, including traffic, water, electricity supply in the Capital and staff functions for the military. RSS volunteers and soldiers camaraderie is based on mutual trust and respect for each other which have been exhibited in the Northeast, border areas and also during the natural calamities in the country. Moreover, RSS unfailingly stood by the Indian Army against pseudo-secular forces who frequently targeted it for alleged human rights violations.

The biggest onslaught on the Army took place when the same pseudo-secular forces supported Sachar Committee’s demand for head-counting in the Armed Forces on the basis of religion. The reply of Major KPD Sharma, VSM, to Abusaleh Shariff, the member-secretary of Sachar committee, is noteworthy. He responded, “The Indian Army has an apolitical character in which people from all communities and regions work together without any distinction on the basis of caste or creed and religion. The nationalistic representation and the all-India character of the Army have been most admirable and acknowledged by all sections of Indian society. The most important factor for achievement by the Indian Army is because of its group cohesion and camaraderie without any concern for caste, creed or religion.” He further informed that “therefore, data relating to various castes or religions is not maintained in the Army and it will also not be proper to collect or collate such data.” RSS-BJP resolutely supported the Armed forces refusal to Sachar Committee.

There is a political and intellectual class in India whose toxic anti-RSSism is not hidden. They are post-doctorate in misinterpreting and misquoting. Not just Bhagwat, but his predecessor, MS Golwalkar, has been grossly misquoted and misinterpreted in his lifetime and even after his death. Even his critics know Bhagwat made no comparison between the Army and the RSS but the political expediency led them to ridicule RSS. It was not merely immoral on their part but it also demonstrated a new low in country’s political discourse. However, this is not the first time he has been misinterpreted. They have been doing so for the last one decade. However, not on a single occasion, Bhagwat has rebutted them, least to say, using any foul language. He weighs every word before he utters. The expression of hatred, bigotry and group supremacy has never been part of either Golwalkar or Bhagwat’s speeches. Bhagwat’s response is proportional to the situation he confronts. His corrective intervention is tended to be incremental, though which kept him from overreacting or overreaching.

Lastly, Bhagwat espoused a nationalist narrative for ultimate sacrifice for the motherland which is not without corroboration from world history. In November 1860, US President Abraham Lincoln issued a call for more than 40,000 volunteers for three years, though the Congress has the constitutional responsibility to raise armies. In his Muzaffarpur speech, Bhagwat assured that ‘yes, we are here’.

Sat Feb 24 , 2018
A clarification is being issued by Hindu Jagarana Vedike regarding the arrest of K T Naveen kumar hailing from Maddur who the media reported as a volunteer of the organization was alleged to have been part of the Gauri Lankesh murder last year. In the below, Hindu Jagarana Vedike has […] 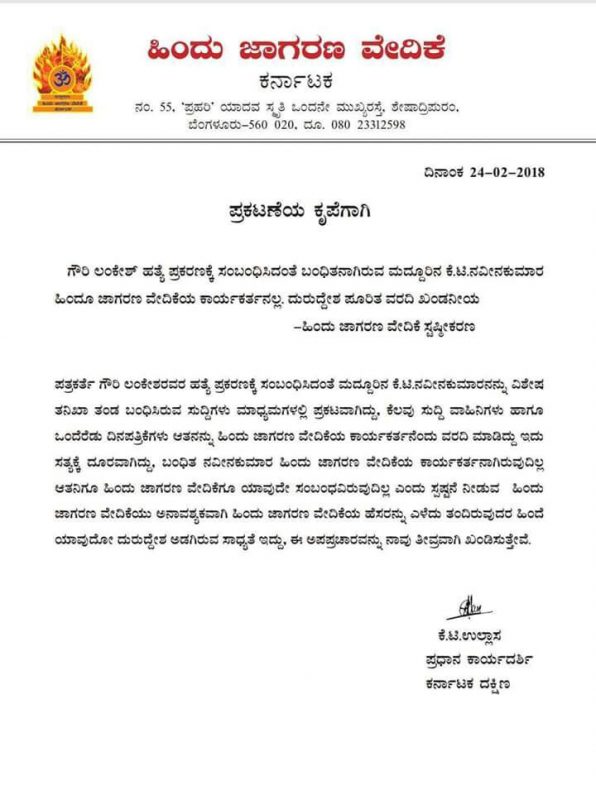