The idea of ‘Sangh mein samaj’ was seeded. Over a period of years we have come to know, Sangh is not the lone organization today speaking pro Hindutwa, nationalism with many new voices, writers expressing their thoughts freely. From the days of Saffron terror tagline in 2011 to Saffron Win in 2014 to Hindu Pakistan now, Sangh has been criticized and yet the organization is growing immensely said Ratan Sharda in his address.
‘There is an ideological war happening where the Breaking India forces are trying to divide the society in each action of theirs and our job here is simpler and it is to just remind the glorious past’ he declared.

‘Ordinary human beings who need social institutional help are made extraordinary under the influence of the Sangh. The swayamsevaks who are humble in nature have only kept working for the betterment of the society at all possible ways. Lakhs of seva projects, dedication of the Swayamsevaks towards contributing to the motherland are often neglected and criticism of RSS is biased’ said Ratan Sharda.
Ratan Sharda reminded the audience about anecdotes of Guruji, Rajju Bhaiyya Ji, Yadav Rao Joshi Ji, Balasaheb Deoras Ji which remained untold and the need to throw light to people about the dedication of pracharaks and Swayamsevaks was the need of the hour and thus the book took shape.

Ratan Sharda spoke about how the earlier Sarsanghachalak Prof Rajju Bhaiyyaji who arrived late night to the karyalay slept in the bullock cart so as to not disturb the sleep of the karyalay’s caretaker.
Balasaheb Deoras Ji despite in a dilapidated medical condition had traveled to Chennai where a bomb blast had killed Swayamsevaks and injured some. He had cited that “his family members” were affected.

Most unique essence of RSS Leadership is that it connects with the last Swayamsevak of its cadre. Sangh believes that the role model and icons here is not a top leader but a person who is working at ground level dedicating life time for welfare of the society Ratan Sharda proudly said. Speaking about ‘Now it can be told’ authored by A N Bali in 1949 which speaks about Guruji and his tireless efforts during the partition of India at Sindh, Bali had requested Guruji to release the book and Guruji had asked Bali if he had fed his mother, had taken care of his mother but those things were not to be readable in newspaper hinting that his efforts in the Sindh was service to motherland and was nothing more than that. The wellwishers of the Sangh who generally asked why RSS never published any books, articles to counter the narrative set by the opposers of Sangh, we answered Sangh will certainly do something for the sake of the organization and society when the need arises and has deliberately stayed away from publicity right from the day of start of the Sangh. The Sangh does nothing and Swayamsevaks do everything has been the mantra all through said Sri Nagaraj V in his address.
He asked where the communists were, who published so many books on communism, socialism and distributed it for free to students all over the country in the times of 60s and 70s. The whole communism ideology remains untraceable today. Hovering around the factory labourers and fight for the rights of the latter was not understood even by the workers who were against everything management said V Nagaraj.

The determination that the Swayamsevaks will respond for the need of the society has been addressed time and again.

K R Malkani who was one of those first people to be arrested during Emergency has written a book called The RSS Story in 1980 has elucidated on the philosophy of the RSS, DoctorJi, Pratijna, Prarthana of the RSS . Later Walter Anderson, Sridhar Damle authored Brotherhood in Saffron giving a political broad picture and now RSS 360° is out for read. All the three books speak about the work of RSS as character building, commitment of thousands of Swayamsevaks in nation building, reestablishing cultural ethos, acknowledge rich cultural heritage, love for one and all, Hindutwa. Though the three books have come in various times all the authors have echoed the same V Nagaraj opined.

Swami Vivekananda was touring the country before he left for Chicago. The idea behind the tour was to speak to the kings and organize them to fight the British. However Swami Vivekananda realized that the inert attitude of the kings and naturally his subjects would not come together to fight the British. He had believed strongly that awakening the people would be the need of the hour and he consciously dedicated himself towards it. Sister Nivedita also was of the same opinion. Doctor Ji who started Sangha in 1925 had the same vision in mind and so what RSS is doing what Swami Vivekananda, Sister Nivedita had dreamt earlier’ he said

Stalin had answered on a question for basis of Communism for which he termed Intense hatred (Varga Sangharsha) and the same question as to basis of Sangh work was asked to Guruji and he had answered Intense love for the society and culture remembered V Nagaraj.

‘Any organization which has a blend of traditional values and modern thoughts will be successful and those are qualities which have made RSS successful. RSS has always been into service sans publicity and that has been the strength of the organization’ said Sri Vinayak Bhat in his address. He also remembered the Swayamsevaks at Sanghaniketan Karyalaya were the first to start doing service at the rain battered Mangaluru recently and the media intelligently, yet deliberately remained oblivious to it.
Similar to treating Dalits as untouchables, anyone expressing views on nationalistic cause is neglected and made fun of. Under the pseudo liberal umbrella, Naxals, separatists find the space but RSS is kept out of it and looked down upon he added.
Having worked as a crime reporter and covering communal clashes in Mangaluru for a while Vinayak Bhat opined that the place which would have been another Kerala was stopped by active work by RSS on Dharmic lines.

‘Sangh allows ideas to flourish, thrive and thus energizes its cadres. Several of its initiatives on healthcare, tribal, downtrodden have only established a strong society. Working on a nationalistic mission, with sterling success stories, and few of its people who had held highest offices in constitution making stands as a testimony to the work and ethics of Sangh. Success of Sangh is success of dharmic institutions.’ Prasanna said.
He expressed his sorrow on RSS having been the World’s largest voluntary organization, the books it has produced is low in number giving enough ammunition to leftists calling RSS as fascists, ultra-nationalists. 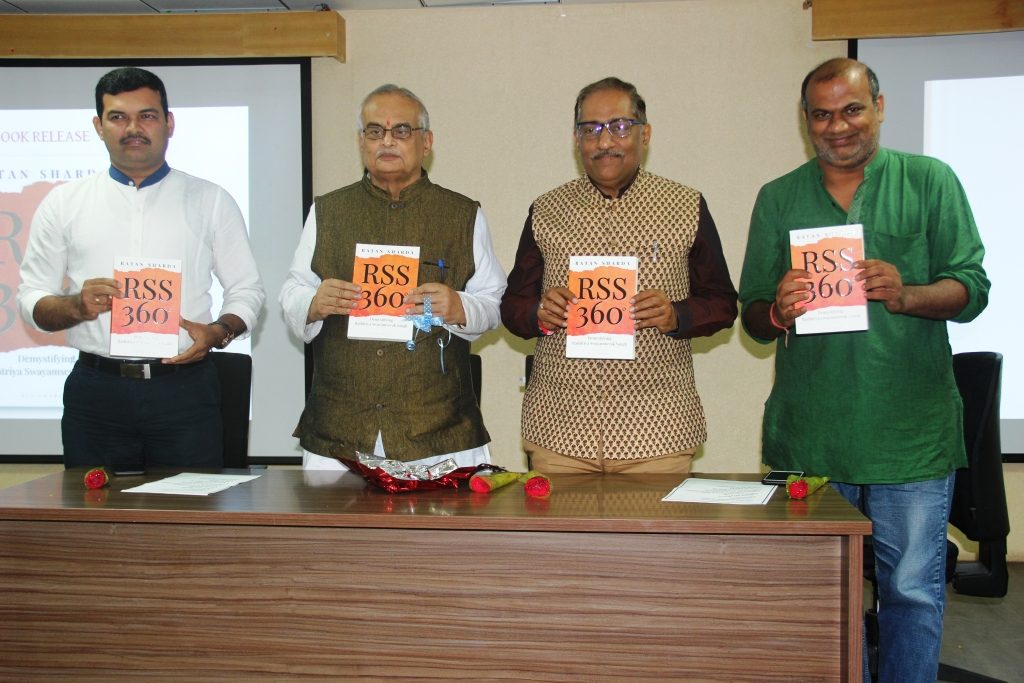