Sarsanghachalak Mohan ji Bhagwat, Sri Subudhendra teertha swamiji of Raghavendraswamy mutt, Mantralaya, Sarkaryavah Sri Suresh Bhaiyyaji Joshi
Swami ji said that Bharat is the best among the galaxy of nation and this is a land where the Saints and ascetics have worked. Bharat is known as Jagadguru among all.This is a land of holy rivers and spiritual places. There is unity among all diverse cultures in Bharat. With the efforts of all of us, an awareness would be created in the Hindu Society and Hindu Dharma would regain its deserved place. 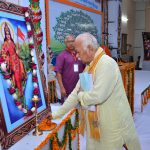