A huge number of swayamsevaks gathered for what is being called World’s largest congregation of men in uniform. It included engineers, doctors, farmers, students, academicians, politicians and people from all strata of social life.

‘Just like we say Sun rises and sets but in reality we have the earth revolving around him, we have to turn towards nationalism’ said RSS Sarasanghachalak Dr Mohan Ji Bhagwat. He also reiterated Acharya Avdheshanand Ji Maharaj’s quote on the stage that Hindu becoming kattar means he is becoming more liberal, broadminded and helpful.’ For last 92 years, Sangh swayamsevaks are working selflessly for the welfare of the country and to revere Bharat Mata.

On Dec 11 2017, the Bhumi poojan was held at the Jagriti Vihar Extension where “Rashtrodaya” programme was scheduled to be held. File Photo of Sarakaryavah Suresh Bhaiyyaji Joshi in the Bhumi Poojan in Meerut in 2017 Dec.

Meerut. Mohd. Afzal, 50, was surprised when a few Rashtriya Swayamsevak Sangh volunteers came over to his house in Meerut’s Rohta road area on Thursday seeking food to fill two packets-six paranthas and eight pooris in each of them, for members expected to attend the mega RSS convention, Rashtroday, on Sunday. Afzal asked if he could contribute two more. As many as 3 lakh families across Meerut, irrespective of religion, caste and financial background, have come together to provide 6 lakh food packets for the more than 3 lakh attendees at the event.

“I wanted to rise above religion and caste, and contribute in my own little way to the biggest event ever held in the city. After all, the people gathering here will be our guests. My wife has ensured that the flour for the paranthas and pooris is prepared fresh so that they do not become hard by the time they are delivered to the guests,” said Afzal, an advocate by profession. The food packets, which were distributed by RSS volunteers to different houses in the city will be collected by Saturday evening and distributed among the RSS members attending the mega convention at different checkpoints on Sunday.

Preparations for food packets at the residence of Ganesh Bhavar in Valmiki Basti of Soorajkund area are underway. Bhavar works as a sanitary worker with Meerut Municipal Corporation. Sujata Bhavar, his daughter who has been given the responsibility for the food packets said, “It is a matter of great honour that the food which we will prepare will be distributed among the people who will turn up at the RSS meet. Our packet can reach rich, poor or people from any other caste and religion, but there will be no differentiation of any kind in the packets and this just brings people from all religions, castes and backgrounds together.”
A minimum of two and a maximum of four packets have been distributed to 3 lakh families by RSS volunteers in a manner that a total of 6 lakh food packets are prepared, which will be distributed among not only the RSS members but also the volunteers, labourers, police and other people who attend the event. “We have got a positive response from all the houses in the city. Most of those who did not accept the packets were people who did not have someone to cook at home. Vegetables will be prepared at the venue and added to the packet along with a water bottle,” said Payal Agarwal, intellectual head, Rashtriya Sevika Samiti, the female wing of RSS.

Sunder Lal Bhrunda, general secretary, Maharishi Valmiki Buddhi Jeevi Manch said, “The entire issue of untouchability has been shattered by this event because people of all religions and caste have come together for the cause.” Bhrunda’s wife will be preparing the food packets for Sunday too. 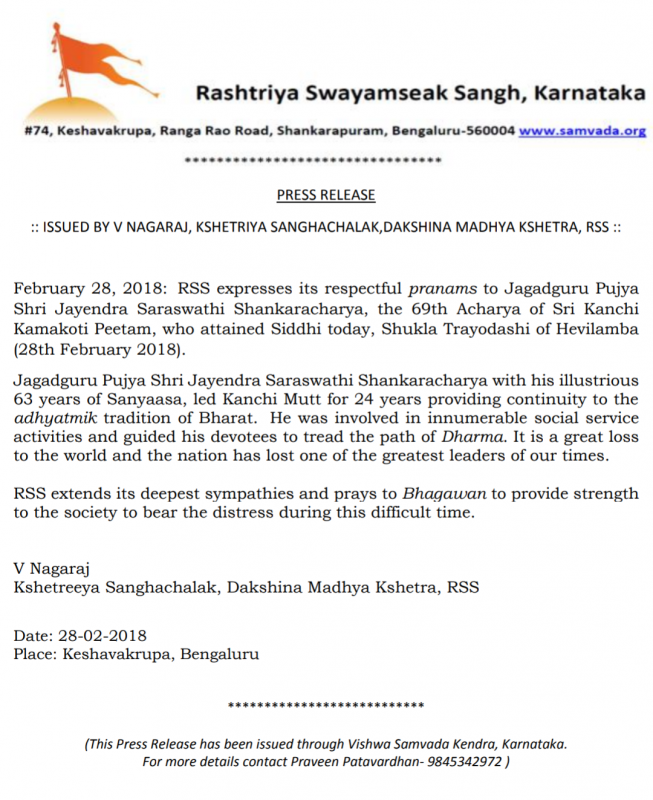