1 May 2019, Bengaluru: Veteran RSS pracharak Sri Sudharshan passed away today in the afternoon at Bengaluru. He was 85. Suffering from respiratory health issues he was admitted at a private hospital in the city few days back.

Hailing from Ullala, Sri Sudardhan served with the Karnataka Government as revenue officer and as Tahshildar. He resigned from services to dedicate his whole life for the cause of the society by getting in as pracharak a full time worker with RSS. He served as a jilla pracharak at Chikkamagaluru, and later devoted to serve through Hindu Seva Prathishtana for a long duration. He was instrumental in driving a correspondence course named Hindu Jeevana Deepika . He was involved in designing the syllabus for the same.

Sri Sudarshan had pleadged to donate his eyes and the whole body to the needy after death. A shraddhanjali sabha is being organised at Keshava Kripa tomorrow at 7.15 am. His body will be donated to a medical hospital at 10.00am

Thu May 2 , 2019
Dr. Master Hirannaiah The VSK expresses deep condolences on the sad demise of popular stage artist Master Hirannaiah. He was a strong voice against social evils, corruption and authoritarian political regime during the infamous rule which imposed emergency in 1975. VSK, the RSS and it’s affiliate organisations condole the loss […] 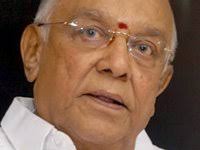