The event started with a detailed introduction to the guests and book by writer and author Shri. Manjunath Ajampura. He outlined the book, the need for it and a brief introduction to the author Shri. RN Kulkarni.
In his address Dr. MS Chaitra outlined the book and touched upon what it covers and what it doesn’t. An excerpt of his talk is below: “Terrorism generates a rage in us irrespective of the government in power. We all expect that terrorism is wiped out from the world. But we need to understand that may not become true in our lifetime. This book provides the knowledge about the nature of terrorism and educates us on how we can respond and equips us with the right knowledge. The book also touches upon the nature of Bharateeyata, what it means to an Indian and how we dealt with others. The author traces the entry of Islam in the subcontinent and the methods it adopted to expand. Though the author scrutinizes the advent of Islam he has been careful of not going into the anti-Islam rhetoric. He highlights that we live with Muslims in harmony. In further chapters he outlines the historical phenomenons that we have not made proper sense of due to which our understanding of Islam is limited. He then outlines the issue of Kashmir and traces a brief history Islam and terrorism in the region leading to the exodus of Pandits. We recall Sharada devi in our shlokas daily but she is not there anymore. To know the crisis of terrorism we need to understand Islam and the Jihadi mindset. Islam also uses violence to expand and to understand how it works we need to understand how religions work. We incorrectly understand Hinduism, Buddhism or Jainism as religions when we don’t understand what religion is. European evangelists like Rogarius saw 17th century India as full of false religions and have to be brought to the true path. To understand the nature of religion and secularism we have to understand Christianity and the way it progressed in Europe. Without understanding the nature of religion we cannot understand terrorism today. Terror disturbs us because it brings transformation in society. Terrorism cannot be dealt militarily alone as those who commit act of terror are trapped in religious morality and according to them they are working for a just cause which is morally praiseworthy. While many countries like France, Germany and UK are becoming susceptible to Islam or Islamophobic, India had a unique way to deal with terror. Indian society assimilated other religions by accommodating them and allowing them to pursue their way of worship and life. We have to study our own culture to deal with Islam and terror today. Even UN has not been clear in its definition of terror. I urge you to write further on terror and the way to deal with it” 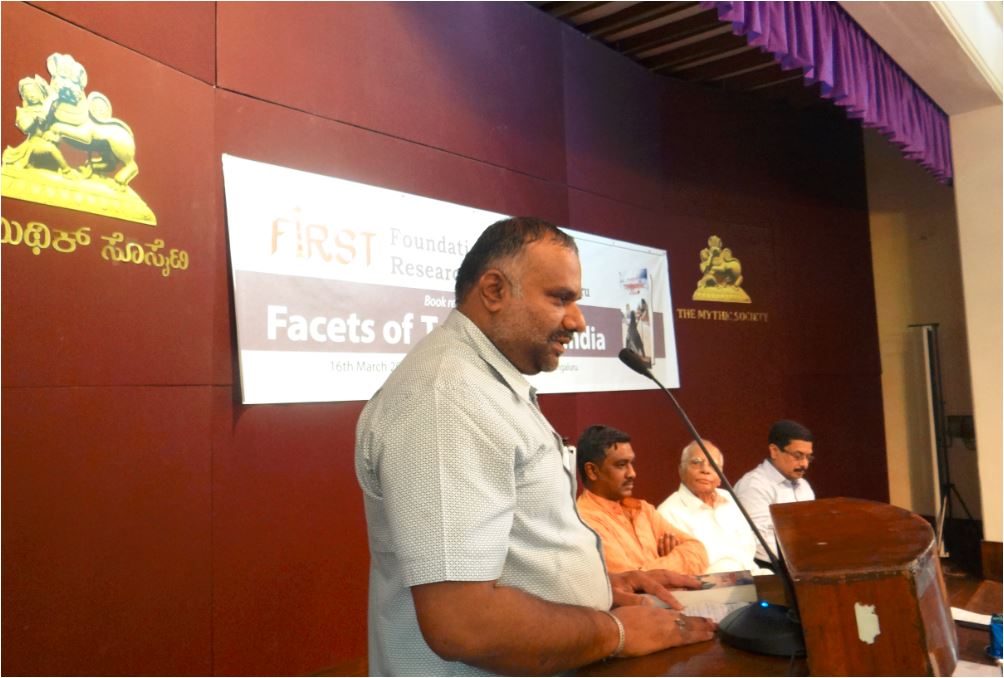 Subsequently, the book ‘Facets of Terrorism in India’ was released by all the guests.
Shri MR Venkatesh spoke next and highlighted the importance of the book and the need to study it. Here is an excerpt of his speech. “We are able to lead normal lives because of the sacrifice and work of our intelligence officials, soldiers and police officers who strive to keep us safe. We are quick to blame our security officials for one incident but we forget that they keep us safe every other day. Hindus consider everything as part of their lives, animals and man alike. We don’t have one God, one way of life, which is creating the conflict worldover. We have failed to realize that these religions are also political enterprises to expand. Even Christianity is equally capable of creating terror like Islam. Unfortunately we don’t deal with these religions in public life. But we can pick the thread and understand how they operate. From Koodamkulam agiatiton to the Sterlite stir and creating Tamil Eelam, the Church has its hand in it. Unfortunately there is an entire ecosystem which is out to sustain and protect the perpetrators, NGOs and organisations. Movies are money laundering tools today. Kulkarni’s work is significant because it warns is about the entire issue. Until US faced terror on its own soil on 9/11, they understood the way terror is funded and sustained. Islam allows one to wage war for the sake of getting women of others. We are not dealing with religion alone but it’s interpretations too. Muslims within Islam like the Ahmadiyas are also persecuted as they have a different interpretation of the way of worship. Though they originated at the same place, the problem between Abrahamic religions originates in the way they interpret their holy books and worship. Whereas ours is a society which assimilates all beliefs and ways of worship. In our society we have various sampradayas and each are respected and their followers adhere to it and none question it. In our society even if war was waged, women, children, helpless and temples were left untouched. However in Islam it is different and as outlined by the Quranic Concept of War it wants the extermination of us all. I thank Kulkarni ji for warning about the facets of Islam and keep us informed as to what we are up against.”
Author of the book Shri RN Kulkarni spoke about his book and highlighted the reasons for writing the book. Here is an excerpt of his speech. “I wrote the book due to two factors. My identity was hurt and my patriotism was questioned. It’s the lack of identity due to which we are at the crossroads today. Three words which define this identity for me: Bharat, Bharatiya and Bharateeyata. Bharat was the land of knowledge where whatever learned culminated in the good of society. We didn’t have the concept of nationhood but we revered our Matrubhoomi. We were a land of similar culture. Today we have disconnected from our roots. We have become victims of terrorism due to ignorance in our intelligentsia about Islam and Jihad. To me knowing is knowledge and knowledge is power. We need to understand Islam to understand how terrorism affects us. This has been going on ever since Islam ruled us for centuries. Aurangzeb committed genocide of Hindus when he ruled which was driven by Jihad. Jihad is based on their understanding of Dar-ul-Harb and Dar-ul-Islam. They wish to convert the non-Islamic land into the land of Islam. We have to study and understand Islam in our universities and intelligentsia. Unless we understand Jihad we cannot fight it. Many contemporary civilizations perished but we survived. Our society has survived because of common man.”
A Q&A session followed the speeches by the guests. Questions on tolerance, role of mothers in educating children about religion, role of ISI in other countries, political decisions being detrimental to the country, were tackled in the session by the author.
Santosh GR introduced the audience to the work of FIRST and later delivered the vote of thanks. The entire proceedings was conducted by Smt. Anupama Harish. 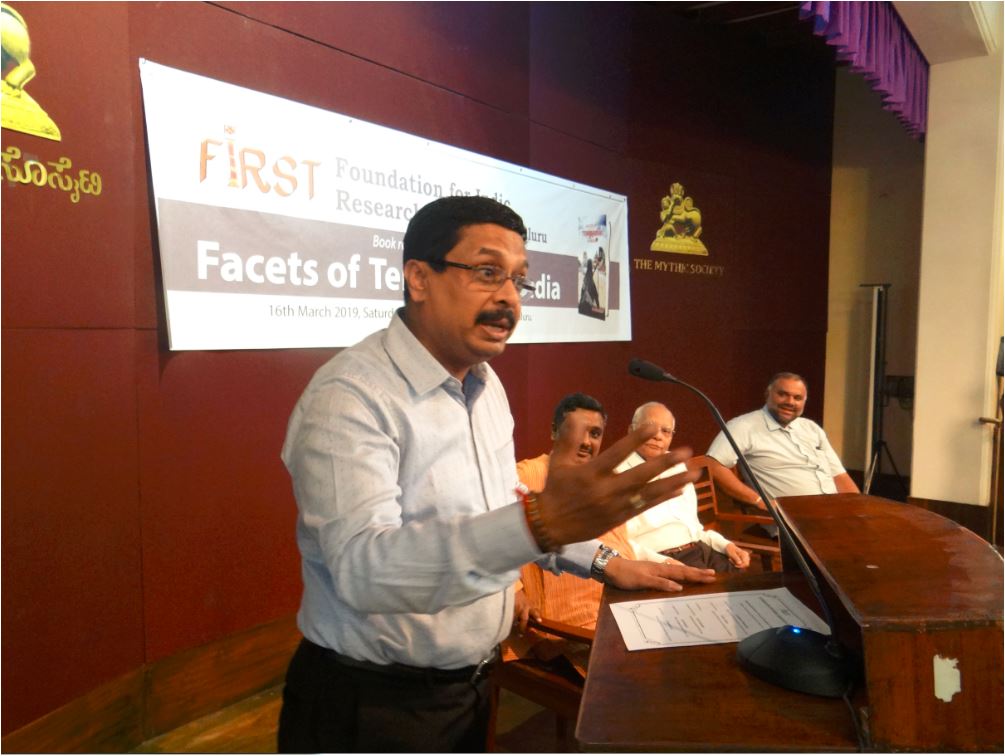 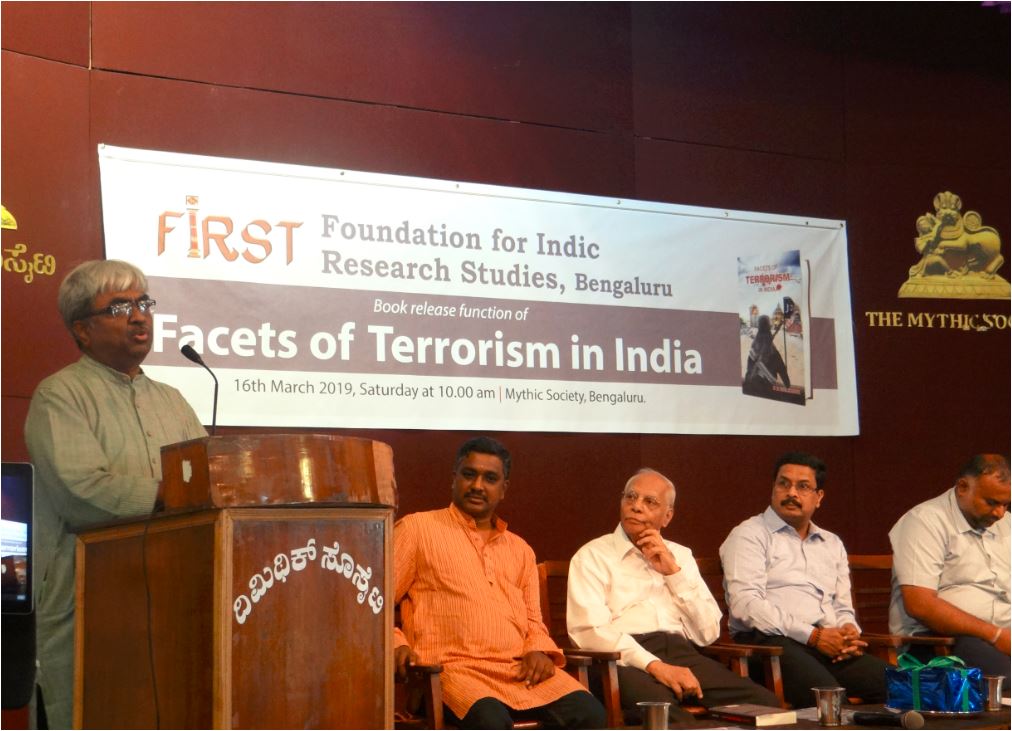 Sri Manjunath Ajjampura introduces the audience on the book release 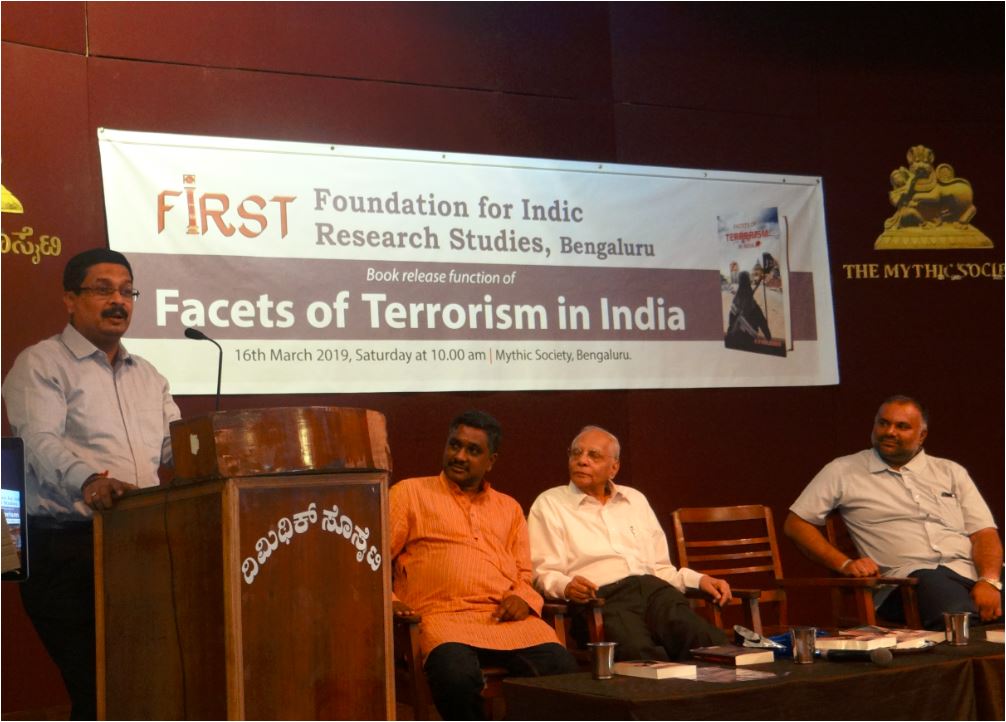 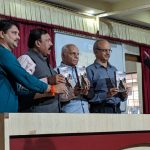 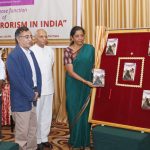