RSS and Politics
The RSS since its inception has thought of itself as an organisation of the entire  society and not as an organisation in the society. This stance of RSS has not changed  even after our independence from the shackles of British rule. Hence in the constitution of RSS, written soon after independence, in 1949, it is clearly articulated that should  Swayamsevaks choose to enter politics, he is  free to join any party. This constitution was written before the establishment of the Jan Sangh. However even after the Jan Sangh came into existence and despite the fact that many swayamsevaks and pracharaks were actively working for it, there has been no change in this provision of  constitution. As we have accepted democracy after independence there are bound to be more than one political parties in the country. Since the Sangh is an organisation of the entire society, no facets of social life would remain untouched by Sangh. It is naturally expected that a Swayamsevak with his national perspective would actively participate  in every aspect of social life including political arena according to his interest. Hence just because some swayamsevaks are active in politics, to say that the RSS is a political entity,  is incorrect.
A political party stands for a ‘part’ and there is bound to be a counter ‘part’. Sangh stands for the ‘entire’ society. Conceptually RSS  and Hindu  society are co-terminus and psychologically they are one. Then how can the “Whole” be a party to  a “part”?  It is important to understand this distinction.
After the establishment of the Sangh in 1925, in the year 1930, its founder Dr Hedgewar along with some swayamsevaks and several others  participated in Satyagraha in response to the call of civil disobedience movement by Mahatma Gandhi. Prior to his departure, Dr Hedgewar handed over the reins of the RSS to Dr Paranjpe and made it clear that he and other swayamsevaks are doing this in their  personal capacity. As a consequence  he was sentenced for  for a year rigorous imprisonment.

Post Independence, the then Home Minister, Sardar Patel, suggested to merge RSS with Congress Party. However Shri Guruji respectfully turned down the invitation, stating that the Sangh wants work as an organisation of the entire society and not a political party.

A few years later Dr SP Mukerjee approached Guruji and suggested to him that  in view of the need of a political party with a right national perspective, Sangh should fulfil this void. To this suggestion Guruji  asked him to take the lead in this direction and  Sangh would render all help. However  Sangh will continue its destined work to organise the entire society.

In 1977 during Emergency, when the Janta Party won the elections in which swayamsevaks whole heartedly participated.  In the formation of Janta Party many erstwhile parties had merged. But Sangh,  in spite of the lucrative offer to merge Sangh in a  political party in power, then Sarsanghchalak Shri Balasaheb Deoras  declined it, saying that in a special, critical situation in national life Sangh did take part in the election. But now Sangh will concentrate on its destined mission of organising the entire society.

To comprehend this all, one needs to understand the the idea behind RSS being an organisation ‘of’ the society and not ‘within’ the society.
In 2018, Akhil Bharatiya Pratinidhi Sabha(ABPS) was held in Nagpur. On invitation by Sarkaryavah veteran Swayamsevak MG Vaidya( Swayamsevak since 1931 at his 8 years age)  attended it for a day. As he had completed 95 years of his life on that very day,  he was felicitated  and congratulated at the hands of Sarsanghchalak, Mohan ji Bhagwat. In response to this when he spoke, he said, “To understand the Sangh is not an easy task and it is certainly not possible to do so, through the western perspective that thinks in binaries. One can understand  Sangh only with the Bharatiya perspective that is integral(Ekatma).”
The fifth mantra of Ishavasya Upanishad while describing the Atma Tatva, the Spirit that pervades everything animate and inanimate it describes-
Tadejati Tannaijati Taddure Tadvantike
Tadantarasya Sarvasya Tadu Sarvasyasya Bahyatah
This means It, the Atma Tatva, moves and  it moves not. It is far and it is very near. It is inside everything and it also is outside everything. This may appear contradictory but it is the Truth.
Similar logic applies to Sangh too.
The composition of society is complex. There would be social, cultural, students, labours, educational, political, religious  organisations within society. Sangh, being the organisation of the entire society, no such facets of society would remain untouched by Sangh. Swayamsevak  will be active in all such organisations. But at the same time Sangh can not  be just one  organisation within the society. Besides being all these, Sangh is something more. It is the organisation of the ‘entire’ society.
Similar thing is described in Purushsukta.
स भूमिं विश्वतो वृत्वात्यतिष्ठद्दशान्गुलं। (sa bhumim vishwatovrutvaatyatishthaddashangulam) Even after encompassing the entire earth and the universe it remains little bit.

Atomic scientists had once claimed that the atom is indivisible. Later they stated that the atom is divisible and contains three particles – the neutron, proton and electron. Further they realised that it is not just three but it contains multiple subatomic particles. Then they said that they are not just particles, they exhibit wave like properties also. Then a theory came that it can neither be particle or wave, it is both. It exhibits dual character and was  called duarticle.  Eventually Heisenberg’s uncertainty principle came that says that the position and velocity of an object cannot be measured exactly at the same time, even in theory and it arises in quantum mechanics simply due to the matter wave nature of all quantum objects.  “The same thing is described  in the Ishavasya Upanishad. If one understands this  and  the Bharatiya integral view ( not the binary view) then only one can understand reality of Sangh” this is what Shri M.G.Vaidya clarified.

As Sangh is the organisation of the entire society and politics is a part of society some Swayamsevaks are bound  to be active in this facet of social life.
But politics alone is not the aim of swayamsevaks. Since we are now in the midst of the greatest festival of democracy, the general elections, swayamsevaks will participate in public awareness campaigns to encourage people to exercise their franchise with an emphasis on issues of national significance and not local motivations.
The Sangh’s constitution does not restrict swayamsevaks from supporting specific party candidates however one will note that 90 percent of swayamsevaks do not canvass for a political party or a candidate but speak and raise concerns on issues of national significance. Despite this involvement at various levels, Sangh can neither be a political party or  a part of any political party. It is the  organisation of the entire of society.
This can be comprehended by understanding Bharatiya integral vision and the Ishavasya Upanishad.
Dr. Manmohan Vaidya
Sah Sarkaryavah,
Rashtriya Swayamsevak Sangh 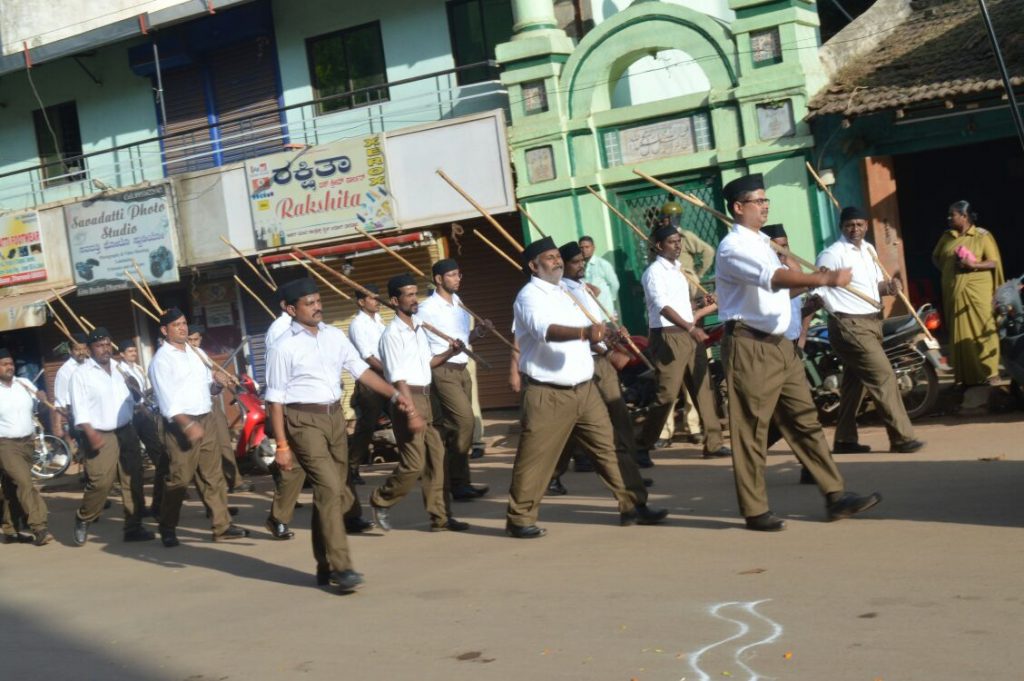