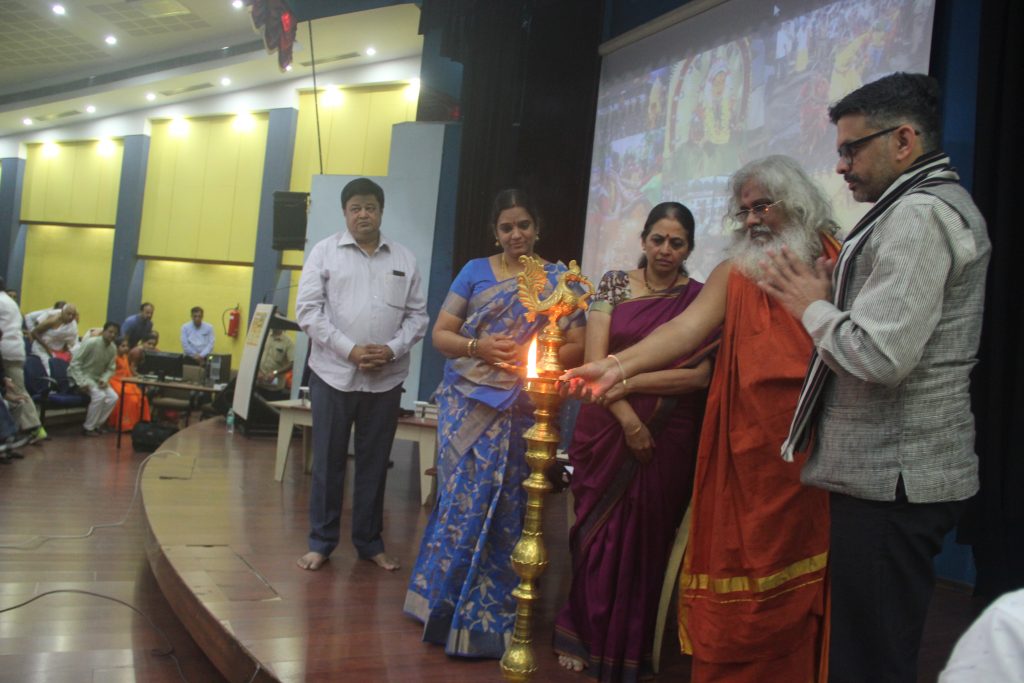 There has been a focused effort to wipe out traditional Hindu practices by many forces in the nation and temples have been made target time and again. The Hindu temples were not mere places of worship and stood as a place of peace, harmony, imbuing art, music and culture. The panel discussion arranged by ‘Organiser’ was to debate those with the help of elite people who were working on the ground to revive traditions and also fight against external forces who would otherwise destroy the ethos of Sanathana Dharma. Saving of temples was not mere from sematic forces but also those who never understood Sanathana Dharma and the vivid learnings it has imparted through scriptures. The Governments, courts, lawmakers have been party in making fun of Sanathana Dharma.
The panel discussion started with the Editor in Chief of Organiser Sri Prafulla Ketkar who delivered the key note address to introduce how the panel discussion would shape into and what should be the outcome at the end of such a comprehensive discussion.
Prafulla Ketkar, Editor-in-Chief in his keynote spoke how Organiser has been bold speaking on nationalistic issues be it rehabilitation of Hindu refugees from Pakistan in 1947 or against Article 370 in J&K or Emergency in 1975, Ramjanmabhi movement, Swadeshi movement and broadly to reassert Dharmik values of Bharat on the edifice of Sanathana Dharma. He said how seeing Bharat through wrong spectacles has harmed the understanding of Bharatiya heritage. He opined that the idea of Bharat is not “Unity in Diversity” but is understanding the unique Bharatiya culture that celebrates the diversity. While Bharat has rendered the gift of ‘divinity in all beings’ to the world, it has to now been made to listen to the West on the discourse of gender equality albeit the latter been trying to practise humanity for last 300 years. The alleged intellectuals and learned people like us have had the issue of understanding Bharat while it is crystal clear in those people who we have labeled as uneducated, illiterate masses with regards to culture, heritage and Bharatiya values.’ 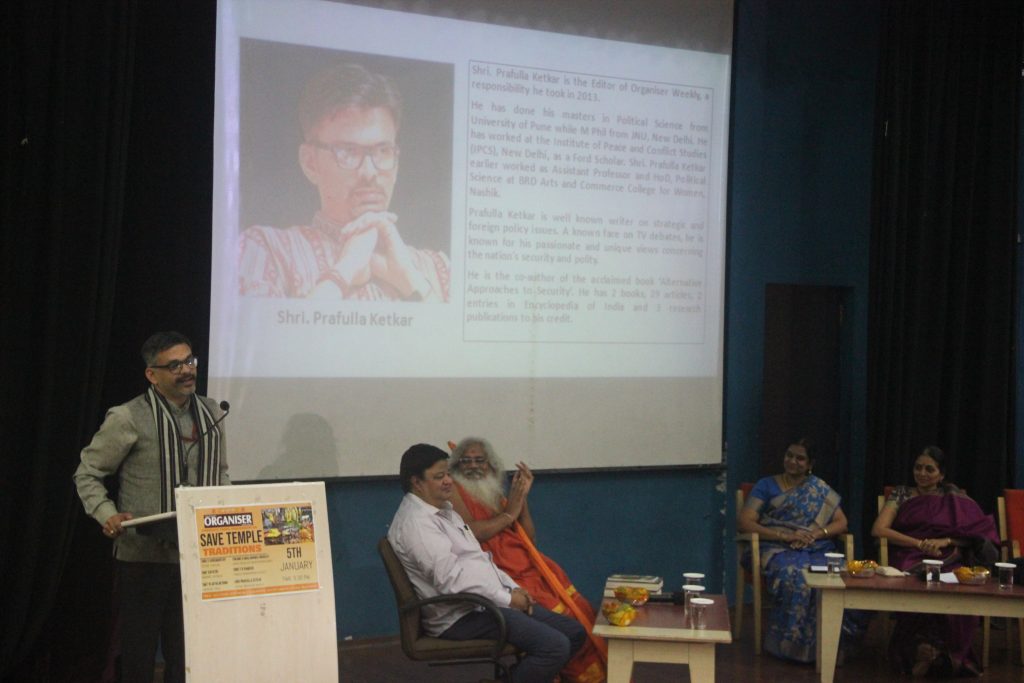 Smt Gayathri Narendra, expert in Ramayana discourse and an active member of WEBOLIM, an organizationwhich facilitates people to experience the treasured esoteric values of Vedas and Ramayana and inculcate them in their everyday life by ways of workshops, classes, camps, explained how at WEBOLIM they have been able to reduce cultural distortions which is at large in schools these days. Teaching Samskrita and Vedas enabling and empowering people to study the texts and scriptures from Maharshis directly instead of relying on the translated versions would be the best way she argued. She said that temples played an important role individual enhancement, society and national integrity.
Sri T R Ramesh Hon President of Chennai’s Temple Worshipers Society which works tirelessly to retrieve, restore, rejuvenate our sacred temples, practices, rituals, culture and architecture lamented on the Supreme Court judgement on the Sabarimala Ayyappa case where the top judicial body had not understood that traditions have not harmed anyone was there a need to destroy the ancient traditions. Saving of our temples like Puri Jagannatha on the controversy of Chulha rice is as important as building a Ram Mandir at Ayodhya. Atheists, marauding missionaries, are not the only ones who are deteriorating the temple cultures but also the faulty judgments of High Court and Supreme Court have added to the woes and the way of reading everything through Abrahamic glasses will trouble Hindus more he said. He said that awareness, legal initiatives and agitation are the three things which the society should practice to save Hindu temples from the siege. 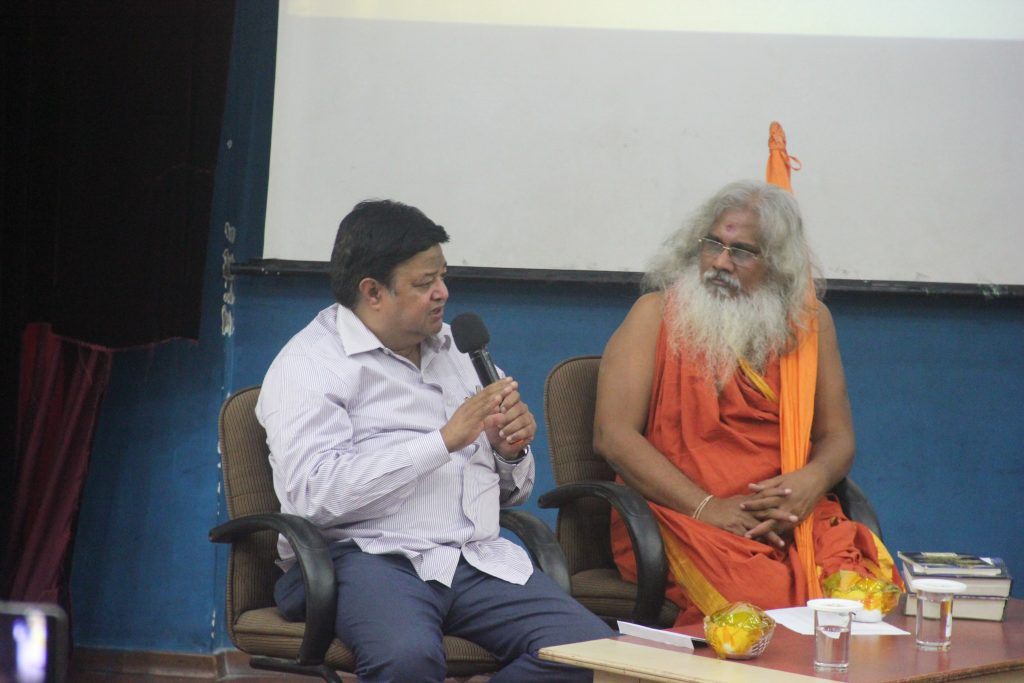 Smt Vijayalakshmi Vijayakumar, pioneer in thematic films and is part of a Heritage Trust a Non-profitable trust which concentrates on promotion and dissemination of culture and heritage of Bharat said Hindus do not believe in one God and we are panentheists which elucidates to Eshwara is in everything, Everything is Eshwara, and there is only Eshwara. She urged that the revival and fight to save our temples would be through a thorough and active participation.
Kamalananda Bharati Swamiji founder Hindu Devalaya Parirakshana Samiti dedicated to rejuvenate (jeernoddhara) Hindu temples and also one who is working in the states of Andhra and Telangana through his work has been successful in keeping the Christian Missionaries and conversions at bay. Addressing the gathering he said ‘Swamiji you move forward in your endeavor and we will join hands with you should be the commitment to save temples and not to just applaud when some work is accomplished.’ The temples are not places of bhakti and mukti alone but also place of bhukti. The shops around temples generate so much revenue which is unexpected at other religion’s place of worship the revered one said.
Our temples are not built with just walls and doors but it is so vast and extended which has the garbhagriha, natyagriha, mukhamantapa, parivaramandir, gopura, shikara, Kalyani, dwajastambha etc and there is a significance for each and every architectural wonder he said.
Speaking about laws been made he recollected how the former CM of Andhra Pradesh YSR Reddy had eyed on hundreds of acres of temple land and how the Swamiji along with his team approached the court and stayed the order which YSR Reddy had passed.
Pained by the Sabarimala judgement he said the lamps in the Hindu houses are lit by women. It is women who help in the naivedya and prasada preparation to the priests of temples. It is the same women who ask their husbands to take the brahmacharya deeksha and visit Ayyappa temple and to top it all any village has would have the concept of gramadevatha a lady Godess who is believed to be protecting the village and she gets the first offering even before the chief diety. With all such practices it should be a laughable thing had someone speak about gender inequality in Bharat.
He concluded by opining that all stake holders who are concerned about Hindu issues including Swamijis, Mathadipathis should come together shunning differences and take up issues of temples, GoSeva, and anything similar and complete the task in a timebound fashion. He recollected how his Rathayatra of 2012 was on Sampurna Grama devalaya sandarshana rathayatra concentrated on visiting every village and every Hindu house. Swamiji has so far visited 8000 villages and intends to visit all six lakh villages in the country and says if such visits are not made it will only ease the job of the missionaries to play their card of conversions.
In the closing remarks, Sri Prafulla Ketkar said Organiser was doing the job of connecting the dots and enabling people to work together for the cause of saving temples. He reminded the attendees that assumption of saving temples is a job of the government and common people assuming that their role is zilch is itself against the thought what Sanatana Dharma has given us.
He said though we as Hindus call Ram as Maryada Purshottam new narrative that he is anti SC as he killed Shambhuka, anti ST as he killed Vali, anti-women as he sent Sita to forest, anti Brahmin as he killed Ravana and may be many more to come. So in the battle of such narratives been set we need to understand our enemies clearly and fight them and as Hindu Dharma has always said it is Dharma which prevails but the support system and a unified voice would make we win the battle earlier.
Members from Rasadhwani Kalakendra, a cultural organisation in the city recited hymns from Vedas before the start of the event. Smt Roopa Srikanth and daughter rendered the invocation song. Sri Prashanth Vaidyaraj welcomed and introduced the panelists to the audience. Smt Anupama Harish compered the event and Sri Radhakrishna Holla delivered the vote of thanks. 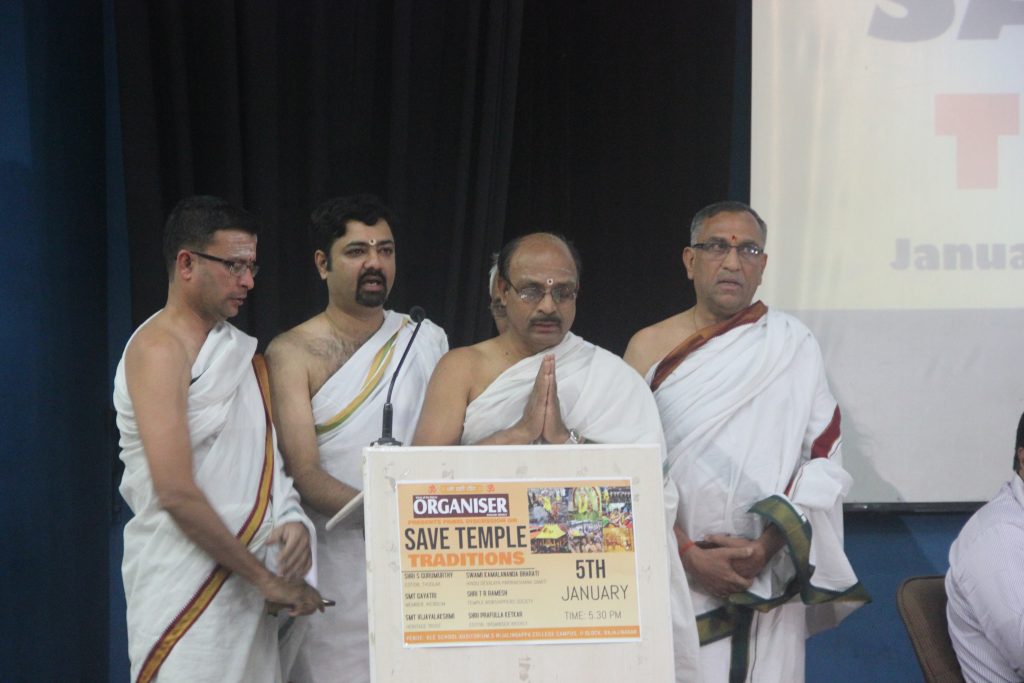 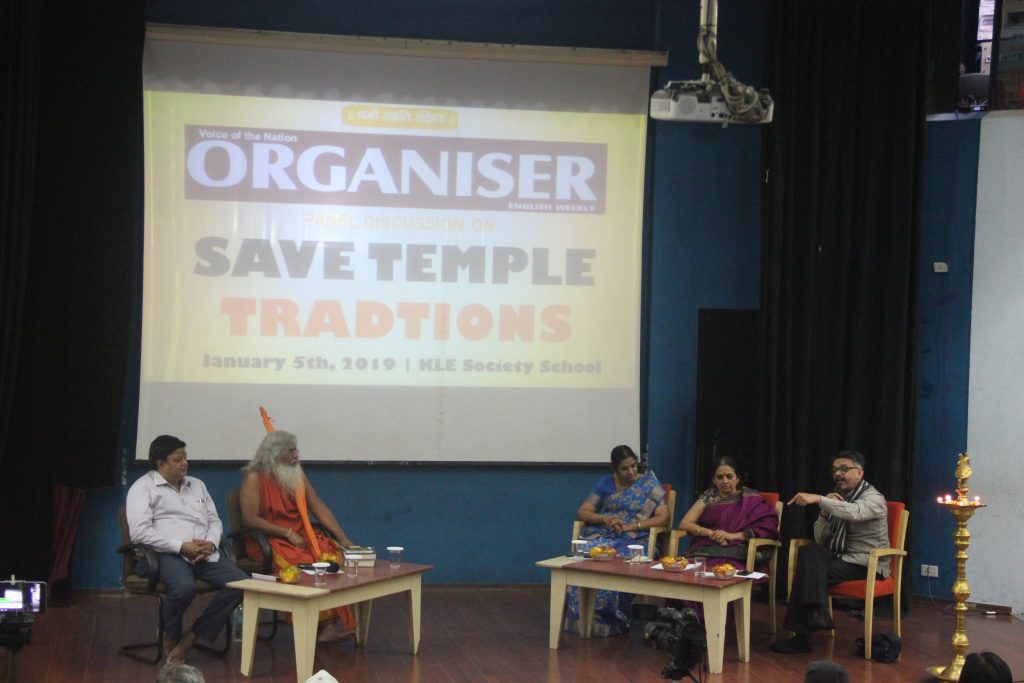 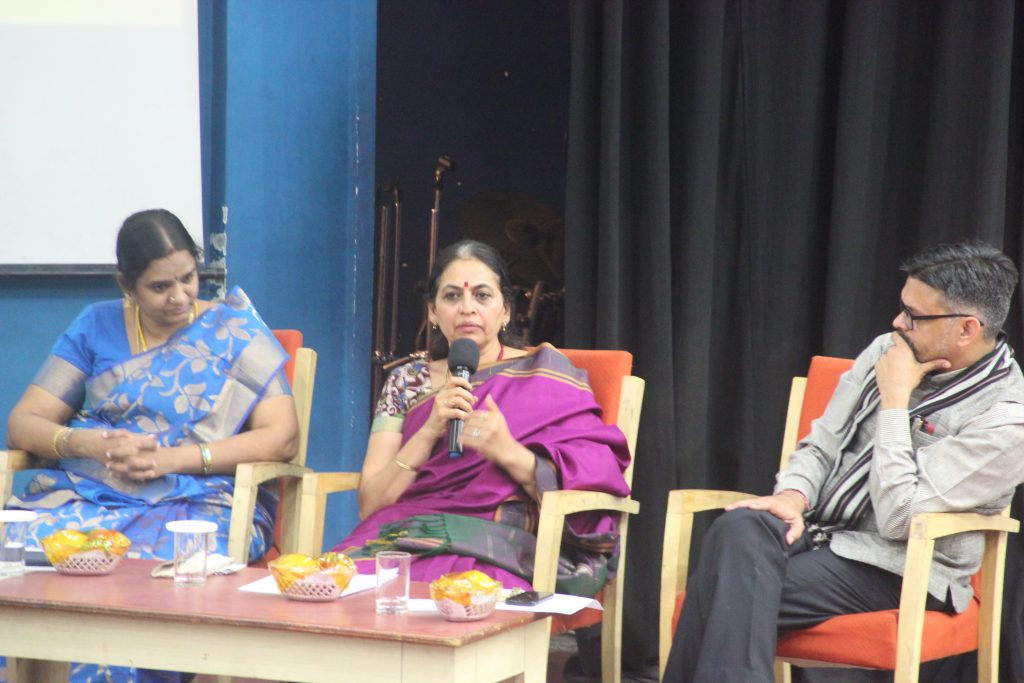 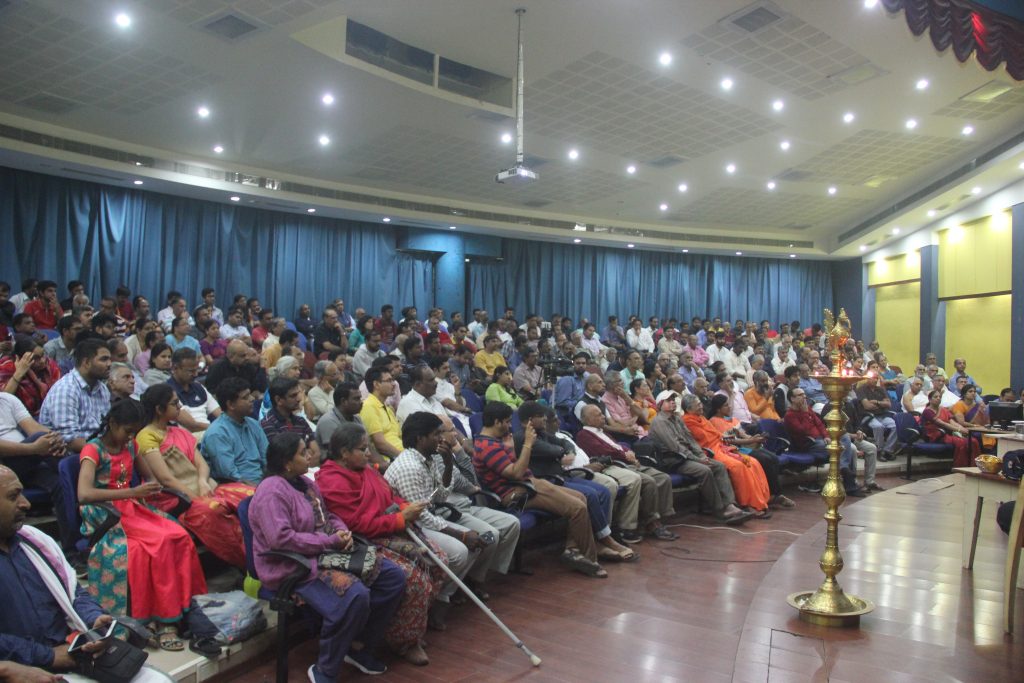 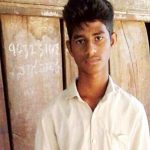