The program was presided over by eminent journalist, author and Member of Parliament (Rajya Sabha) Sri Swapan Dasgupta. Eminent Actress and Karnataka BJP spokesperson Malavika Avinash, and renowned Indic scholar, columnist Sandeep Balakrishna, were the other eminent personalities who graced the occasion as speakers.

Program got inaugurated with enigmatic ‘Jana Gana Mana’ and the whole audience echoed the hymn with pride and devotion.

The event started with Swapan Dasgupta addressing the audience on the history and the series of incidents that culminated at the creation of the ‘Hindu Bengali Homeland’ as a sovereign state of West Bengal. Mr. Dasgupta touched upon facts regarding the partition of India, ‘Hindu Bengali Homeland’ movement and the semi organized massacres, rapes and traumatic violence that created the pasture for need of new state. Mr. Dasgupta emphasized “West Bengal came into existence to preserve a certain way of Hindu Bengali culture…”. Following this, there ensued an interesting socio-political discourse among Swapan Dasgupta, Malavika Avinash and Sandeep Balakrishna which kept the audience absorbed throughout the event with their perspectives on the current Bengal geo-political situation and the history.

Malavika Avinash  “urged Bengali youth to contribute for economic resurrection of Bengal with entrepreneurship and innovation”. Sandeep Balakrishna emphasized “the need of literature to reflect the actual history of Bengal creation”. Program highlighted the necessity for the Bengali youth to be aware of their history which has been largely kept camouflaged by the academia and historians till date. Also, it emphasized the need for the rejuvenation of West Bengal as state in the path of ‘progress’ which it has regressed into an urban catastrophe because of socio-political meaness of varied political parties. Organizers urged the larger Bengali community to feel the sense of attachment to his/her roots and thus, work towards the rejuvenation of Bengal’s past glory. Finally, there a Q&A round between the panel and the audience with lot of facts and view-points exchanged. Many intellectual personalities, journalists, activists and social thinkers from the audience participated in the discourse.

Evening culminated with inspirational ‘Vandemataram’ which rendered the Mythic Society hall on this unique and historical evening.

The event was organized by Awakened Bengal team. It’s an initiative for nationalistic opinion making focusing on Bengal to resurrect the its past glory.

Mon Jun 24 , 2019
‘Boldness, honesty, sincerity and loyalty are the qualities required in journalists’, Dr.Babu Krishnamurthy, Writer and veteran journalist #NaradaJayanti Vishwa Samvada Kendra, Karnataka commemorated Narada Jayanti this year by presenting its annual awards for journalists at a event in Bengaluru today. This is the fourth year that VSK Karnataka is […] 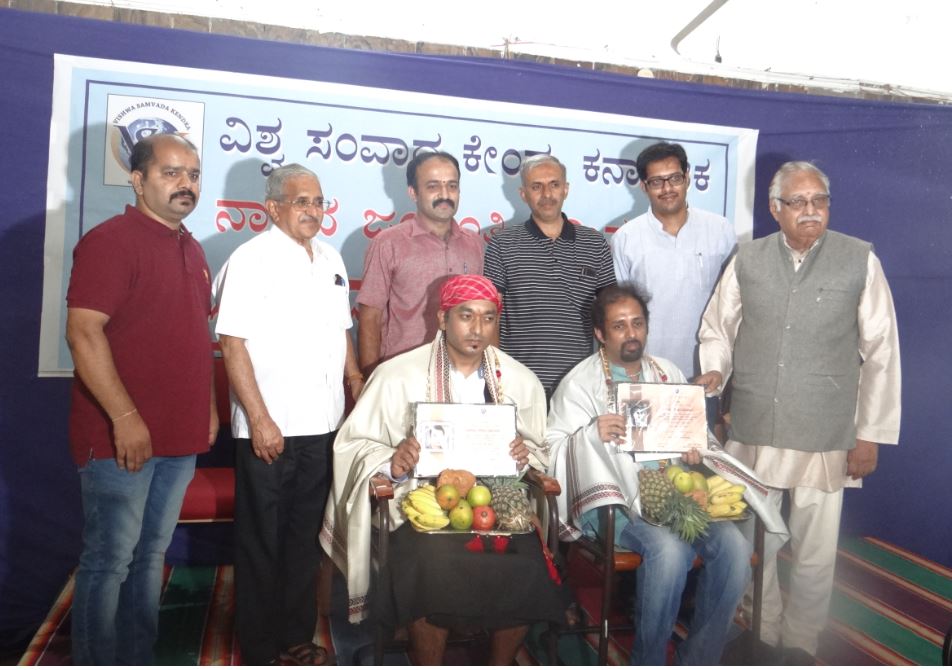