25th May 2020, Bengaluru: An online seminar was organised today by Prajna Pravah on the topic of ‘Self Reliant Bharat – Possibilities and Challenges’. Eminent panelists presented their thoughts on the much discussed key word of ‘Atmanirbhar Bharat’ which was coined by PM Narendra Modi recently during his talk to the nation.

Sri Mukunda C R, Sah Sarakaryah, RSS opened the discussion with a keynote address. The discussion of turning self reliant is not unknown to us and not just happening in Bharata he said. He added stating Gandhiji’s Hind Swarajya, Pandit Deendayal Upadhyaya’s thoughts, Ram Manohar Lohia’s words have always in the past  spoken and dreamt of self reliant Bharat.

Globalization, free trade which allowed movement of goods, information and technology, investments, human resources has got hit with covid19 (with exception on Information and Technology) he said and despite posing challenges, it creates possibilities to come out of them he said.

He said the clarion call by the PM of ‘Vocal for Local’ was the need of the hour. We need to focus on the technology building and rebuilding the same such that we are mindful of the three Es – Ecology, Economy, Ethics he concluded in his key note.

Prof Ramanjini Gowda, agriculturist who is associated with ICAR spoke on food security and self reliance. In his talk he urged farmers to pick alternate forms of getting to self reliance. He praised the Digital India platforms and opined farmers need to adapt to technology which would benefit them in the days to come.
The godowns lack the technology of storage of food grains and we need to grow faster in this space he said. Organic farming, green house farming is gaining attention these days and in the days to come it could result in exports which helps Bharat and the economy he added. He proposed a department solely to focus on Organic farming as the markets outside Bharat could heavily depend on it.

The godown constructions under farmers’ land and subsidizing the same could be in beneficial in many ways. Connecting with farmers digitally and helping them to grow the proportion will be beneficial to reap right benefits, he observed.

Sri Santhosh Thammaiah, writer and columnist spoke on the topic of Self reliance in the field of Defence. He remembered the 1969 article of Pandit Deen Dayal Upadhyaya where the latter had written about Swattwa (Ownership), Samarthya (Competence) resulting in success which the former opined was in the wake of the defeat in 1962 war with China.

The Defence for many years in Bharat had shortfalls with lack of focus towards it. From the times of the words stating that ‘Bharat needs no defence’ to jeep scam to Bofors scam the Defence for many years was driven by middle man he said. We need to focus on the local industries in Bharat and technology needs to the utilized efficiently he observed. Interestingly the defence ministry unlike other ministries need more co coordination for small, medium industries to flourish, technology to grow, finances to pour in. The school, college needs more of military education which could help technology bloom indigenous he said. The shoes, rifles which are being manufactured in Bharat now will help and keep the military motivated and PM Modi’s words on self reliance seemed new but, a lot of work on this front had already begun he said.

Sri Narayana Prasanna, industrialist and chief secretary of Laghu Udyog Bharati spoke on the topic of self reliance in industries. He said though Bharat accounts to 17% world population, the total exports amount to mere 2.6% export.

A lot of Family businesses in the past were crushed and there is a need to revive those he felt. He opined that Start up India initiative is a great positive given that the demographic dividend Bharat possessed. He observed that 70% of the MSMEs produce parts for big industies and 30% of them produce products.

Sri Rajeev Chandrashekhar, industrialist and Rajya Sabha MP had to speak on how the government plans to participate in this sector of self reliance. From the times of economic meltdown from 2008, it is sad that due to corona covid19 crisis Bharat and the world historically, has entered into unprecedented challenges and opportunities. Bharat after over 70 years of independence is at the Highest inflection point said Rajeev.

In his conclusive remarks Sri Mukunda said thinking inwards was what Atmanirbharata was  all about but it should not result in we getting into defensive. We could fail if we chose the defensive mode he said. He called for striking the right balance on this and urged the audience to participate actively in getting into Atmanirbhar Bharat campaign by working closely with the villages, towns we come from to help the local produces and industries. Answering a question he said the responsibility of citizens is equivalent to that of the governments to ensure the come back.

The video of the same is available here. 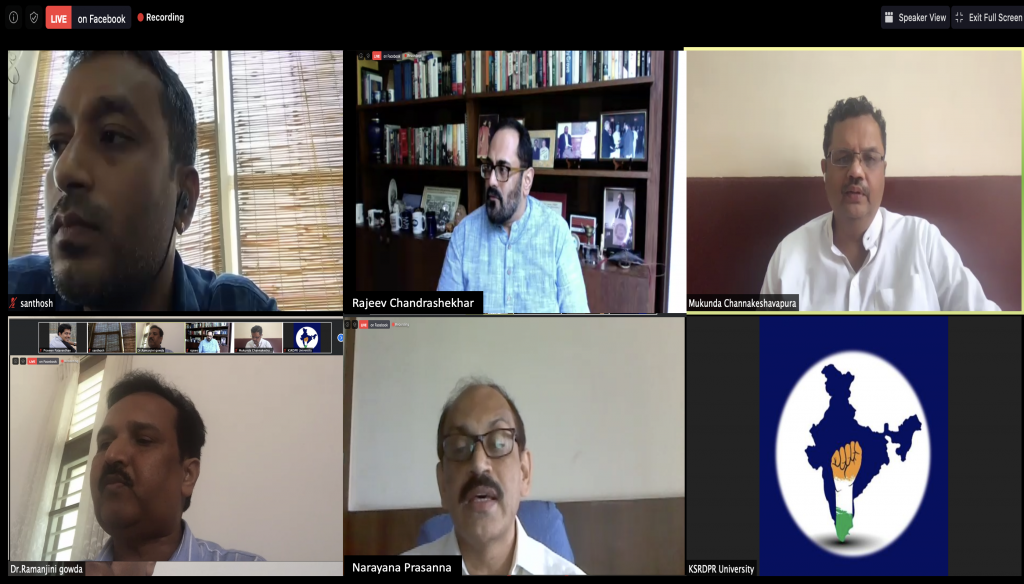