Disha Bharat’s 15 day lecture series on the eve of 74th Indian Independence Day featured Dr. Vikram Sampath, a Bengaluru based historian and an author. Dr. Vikram Sampath spoke about the revolutionary Vinayak Damodar Savarkar on who the speaker has already brought out a splendid first volume biography.

Maligning stories on Swatantrya Veer Savarkar for decades have been laid in the minds of people by false historians. The multi faceted, multi dimensional personality of V D Savarkar needs justice. The whole family who laid their lives for the freedom struggle is not rightly remembered today Dr. Vikram said.

Chapekar brothers had killed Rand, the plague commissioner for his atrocities towards people suffering from plague. The execution of the brothers had disturbed Savarkar. The revolutionary in Savarkar had vowed in front of the AshtaBhuja Bhavani that he would till his last breath fight the enemies of the country and he had lived up to the vow said the speaker. Savarkar is attributed to start the first organised secret society called the Rashta Bhakt Mandal later called Mitra Mela which eventually transformed into Abhinav Bharat. Young Savarkar led the youth in schools and colleges he said.

The infamous 1905 Bengal partition resulted in Savarkar leading the first ever student bonfire of foreign goods in Pune. While we have to remember that Congress adopted Purna Swaraj from British in 1930s Savarkar and the then revolutionaries had demanded Swaraj in 1905, Dr. Vikram reminded the audience.

London’s Bharat Bhavan  set up by Shyam Ji Krishna Verma was a place for revolutionary activities and the reason for revolutionaries planning outside of Bharat was to escape the serious sedition laws which were in place in Bharat. Savarkar also sailed to London and stood as the leader to provide the intellectual corpus and focus. From authoring the ‘1857 First war of Indian independence’ (earlier ridiculed as Sepoy Mutiny), narrating history of India from Indian’s perspective to smuggling arms, ammunition and bomb manuals to Bharat, Savarkar guided the people in Bharat and London he said.

Be it the Alipore bomb blast or Ananth Krishna Kanhere’s killing of Jackson or Madan Lal Dingra killing of Curzon Wylie Savarkar stood as the inspiration to revolutionaries. The book was banned before and Savarkar was held captive by the British. However, the first case of India in International Court of Justice in Hague was Savarkar when he had escaped thought the lavatory of the ship and set foot in Marseille. Dr. Vikram said, Savarkar’s case had ignited fire in France media and politics then.

For all this and more Savarkar was termed as a ‘Dangerous’ category criminal by the British and had locked him up at the Cellular jail in Andaman. The revolutionary never died in Savarkar even with such a torturous treatment. Just as England has apologised for the Jallianwala Bagh incident, it is time that they apologise for the inhuman treatment meted out to the prisoners in Andaman jail the speaker opined. The spoilt food, agonising treatment and the solitary confinement with hands locked facing the gallows would have transformed and shaken the minds but Savarkar was of a different league who went vocal and  transformed the prison! too Dr. Vikram added.

Savarkar in real sense was a revolutionary who wanted the enemies to be thrown out of the holy soil of Bharat and his icons were  Joseph Mazzini and Garibaldi of the Italian revolution. Infiltrating into the army and revolting against the British was what Savarkar advocated. Bhagat Singh had got the 1857 book re published and reading it was a criteria to enter the HSRA. Rash Bihari Bose later had got the same book translated to other languages to inspire people to join their course of freedom struggle. Savarkar had even inspired Netaji Subhash Chandra Bose to join the enemies’ enemy to drive away the British he said.

Dr. Vikram Sampath concluded stating that such a magnanimous personality being mocked is a clear disrespect to the patriot and revolutionary in Savarkar.

Tue Aug 4 , 2020
A Temple for Bharat – Ram Mandir is not a mere temple, it is the symbol of our cultural heritage Dr. Manmohan Vaidya, Sah Sarkaryavah, RSS Ayodhya, the birthplace of Lord Rama, is raring to turn the pages of history and usher a new chapter in its saga with the […] 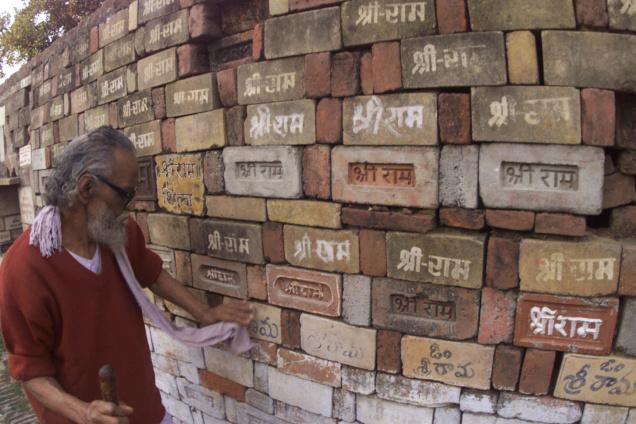