26, Jan 2020, Bengaluru : Director of NIMHANS, Dr. Bangalore Nanjundaiah Gangadhar is awarded with PadmaShri for this year. A brief profile of him is given below:

Dr. B. N. Gangadhar assumed the charge as the Director of National Institute of Mental Health & Neuro Sciences (NIMHANS) on 12 January 2016.

Dr. Gangadhar, who is also a Senior Professor of Psychiatry, brings over 30 years of extensive experience in the field of mental health, from both clinical and academic perspectives. He obtained his MBBS degree from the Bangalore Medical College in 1978. He joined NIMHANS as a faculty in 1982 after completing MD Psychiatry from the same Institute in 1981. He was conferred the prestigious Fellow of National Academy of Medical Sciences (FAMS) degree in 2006 and D.Sc. (Doctor of Science) from SVYASA Yoga University, Bengaluru for his research work on Yoga and Mental Health in 2012.

Concurrent with his faculty post, he has served the Institute in various capacities such as Medical Superintendent; Head, Department of Psychiatry; Dean (Behavioural Sciences) and Program Director/Head, Advanced Centre for Yoga.

Other key posts held by Dr. Gangadhar include Honorary Dean, Life Sciences at SVYASA Yoga University, Bengaluru (from 2013); Adjunct Faculty on Consciousness at National Institute of Advanced Studies (from 2014); President, Indian Psychiatric Society Karnataka Chapter (2012-13); Visiting Fellow (IBRO), Vienna, Austria (1987-88); Consultant to WHO for inspection of Tsunami relief projects (2008). He is also part of the expert committees of DST and the National AYUSH Committee for Integrative Medicine.

With his primary research interests spanning Electroconvulsive Therapy (ECT), Schizophrenia, Community Psychiatry, Public Health and Yoga, he has successfully guided about 50 MD students and PhD scholars. He has more than 300 research publications in various national and international indexed journals (H-Index-34, RG Score 44.27) to his credit. He is the co-editor of the Asian Journal of Psychiatry (from 2009) and active member of editorial boards of national and international journals. He has also served as the Associate Editor of Acta Psychiatrica Scandinavica (2002-2013).

Dr. Gangadhar is the recipient of the coveted Sir CV Raman Award and Doctors Day Award from the Government of Karnataka. He has also shared over 25 awards with other primary recipients.

Known for his `hands on’ approach to governance and his student friendly attitude, Dr. Gangadhar believes in team work and quick results.

Associated with RSS, he has held the role of  Sanghachalak of Bengaluru Mahanagar in the past.

Sun Feb 2 , 2020
2nd Feb 2020, Bengaluru: Senior Sanskrit writers and scholars, Dr. Janardana Hegde and Dr. H.R. Vishwas have been conferred Vachaspati award, honorary doctorate, by the National Samskrita Vidyapeeth of Tirupati. Vaschaspati is Doctorate of Honor to those who have rendered considerable service in the fields of Samskrita Language, Samskrita Literature, […] 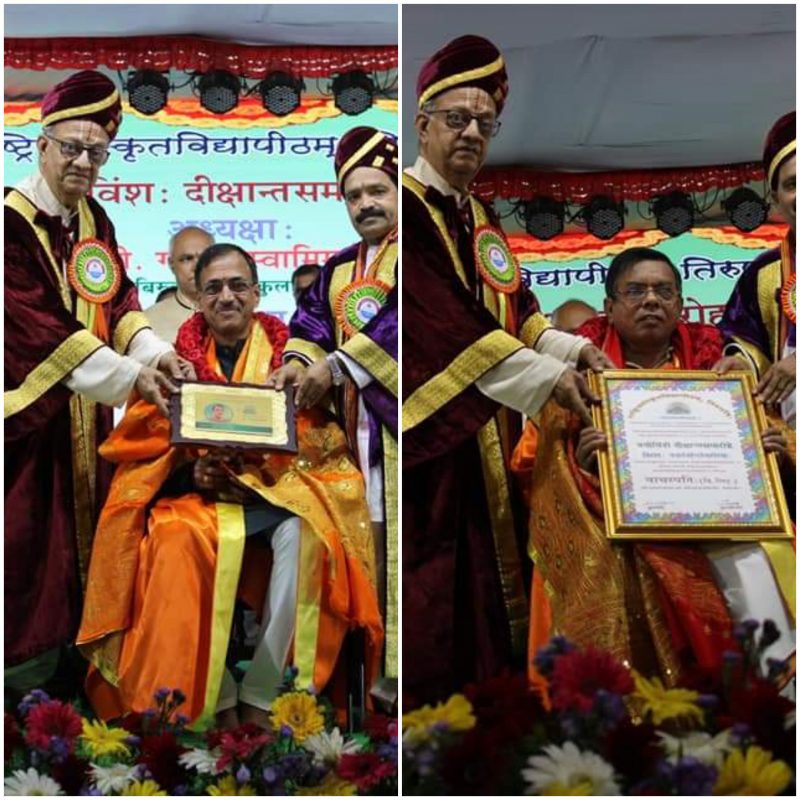