Journalist Ramesh Doddapura has documented his experience of the Samskrita speaking students at Adichunchanagiri Mutt while playing marbles! The FB story is brought to English by Latha Bhat.

These children casually conversing in Sanskrit while playing with marbles, is like a slap on those intellectuals drawing one and a half lakhs per month as per the UGC scale, while writing exaggerated essays about, ‘Sanskrit – the language of Gods’, ‘Sanskrit – the dead language’ and the like.

After Kalabhairava’s Darshan at Sri Adichunchanagiri, I went to ‘Tapovan’ nearby to visit Lord Kalabhairava’s vehicle (Dog), where I witnessed a worldview of Sanskrit.

The children studying at the school run by the Adichunchanagiri mutt, were playing a game of marbles in their spare time. From afar, I was sure that they were not speaking in Kannada and went closer. Of course, the children were conversing in Sanskrit.

Within a short time, there was a small conflict between the two children regarding the game. One boy aggressively spoke in Sanskrit, and the other defended himself in Sanskrit.
In an Indian conference, I had seen presentations about how Sanskrit could be spoken in everyday life, but had never imagined that children playing marbles can converse in Sanskrit.

Mr. Kumar, who is in charge of the area, said that the school had around two hundred children who perform all routine activities by speaking in Sanskrit. This ‘Tapovana’ is a pilgrimage site for anyone who is skeptical about the survival of Sanskrit. 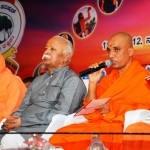