New Delhi. Shri Jagdevram Uraonji, President, Akhil Bharatiya Vanvasi Kalyan Ashram passed away today at 3.00 p.m due to massive Cardiac Arrest at Kalyan Ashram Head Quarters in Jashpur Nagar. He was 72 years. He hails from Uraon village named Komado 3 k.m away from Ashram’s headquarters. He is survived by 3 brothers and 2 sisters.

Jagdevramji was suffering by kidney and heart related problems for last couple of years. Shri Jagdevramji was heading the organisation since 1995 following the demise of its founder President Vanyogi Balasahab Deshpande.

He joined in Kalyan Ashram in 1968 as a Teacher in the school run by Ashram at Jashpur. He accompanied Deshpande ji during his nationwide tour in the eighties when Kalyan Ashram was extended its network all over India. He was vice President of Kalyan Ashram for many years and later he was elevated to the post of working president in 1993 during National Conference at Cuttack.

He lead from the front to carry out various activities. It was under his leadership that the vision document on Janjatis Was brought out.

Sports Festivals and competitions are organised every year for Janjati youths. Shabari Kumbh, Vanvasi Sanskritik programmes during Kumbha mela at Prayagraj and Sinhasth Kumbha at Ujjain, Vanvasi Sammelan at Jhabua in 2003, seminar on “Image and Reality of Vanvasis” organised jointly with Makhanlal Chaturvedi Patrakarita University, Bhopal were some of the highlights of his turn as President.

Kalyan Ashram has undertaken many service activities and relief works for the needy under his leadership. Kalyan ashram has grown into a nationwide organisation covering almost 500 Janjati communities. Now Ashram’s work is extended more than 50,000 villages and runs more than 20,000 projects in 14,000 thousand villages all over India. His demise has created shock & grief across the country.

His last rituals will be performed on 16th July tomorrow at Jashpur.

The inherent flexibility of Bharatiya society has been showcased to the world during the Pandemic: Bhaiyya Ji Joshi, Sarkaryawah, RSS 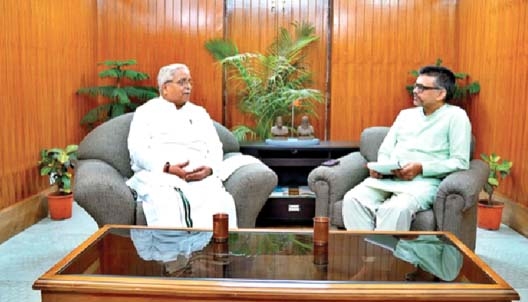