World is experiencing religious terrorism for the last 2000 years, which got aggravated with the advent of Islam. While the fingers point at growing Islamic thought on occurrence of such riots, hiding truth, protecting the perpetrators of terror happens every time. The oft repeated maxim “Blame terrorist not the religion” gets invoked time and again. Such superficial statements are dangerous to progressive world.

Monica Arora, Advocate from Delhi and Author of ‘Delhi Riots 2020 The Untold story’, T G Mohan Das, Advocate and Writer from Thiruvananthapuram, Debjani Bhattacharyya, Columnist based out of Kolkata and Madan Gopal, Retd, IAS and Member of Citizens for Democracy(CFD’s) Fact Finding Committee on Bengaluru Riots, participated in the seminar. The session was moderated by Research Scholar and Content Contributor of VSK Karnataka, Dr. Ragotham Sundararajan.

Sri Madan Gopal in his opening remarks spoke about the CFD committee members who visited the affected place in Bengaluru immediately after the riots. He crisply pointed out that the Bengaluru riot was a preplanned attack on the symbols of the State and the way the prominent people in the locality were picked clearly drove the message of ‘Land Jihad’. He said that each small riot escalates to a larger one to eventually create fear psychosis in the minds of Hindus. The Committee has observed the locals being involved in large scale in the riot and their involvement should not be disregarded he said. Read the full findings of CFD

Monika Arora an advocate from Delhi spoke about the Delhi Riots and her experiences during the investigations on the Delhi riots which ran for months. She congratulated CFD team of Bengaluru for the daring report and said the truth had to be told openly. She opined putting out the truth in public domain may be suppressed by the Urban Naxal – Jihadi ecosystem to establish their anti India and anti peace agenda, but fearing to them would never be a solution. She condemned the publishing company which had succumbed to the global and local intellectual pressure of not publishing the book ‘The Delhi riots’ despite the agreements in place. She termed the shameful act as a infanticide while the social media brought the child’s life as it had the dire need for wanting to know the truth.

Monika Arora in her address also stated the Muslim locals in Delhi had indulged in stone pelting, attacking homes has left the Hindus in Delhi in anguish and trauma and they worry of the hooligans back to attack them is still in the minds of the people. College going girls, burqa clad women have been involved in such stone pelting acts damaging public property.

Speaking about the riots in Sweden or Delhi or Bengaluru, she said the pattern remains constant. She attributed these riots to the brain wash which happens at the rudimentary level of Madrasas where they are taught that ‘every other religion is farce, there is only one God (Allah) and only one Holy book (Quran) also with the stern way of stating Islam would rule the world.‘ She termed this mentality of intolerance which is been planted in minds is resulting in rioting and terror worldwide.

Sri T G Mohandas on a question by Dr. Ragotham if the terror was an offshoot of Khilafat mindset stated that sadly Kerala has turned out to be the terror capital and terror headquarters of India it is sad to note that the CAA violence was being planned from Kerala and any arrests related to terror show a larger number of Keralite (Muslims) being involved. Speaking on major riots not happening in Kerala since 2003, weapons, publications, and planning of attacks are being managed from Kerala he said. Mohandas said that a book was published by PFI in the past which likened Kerala to POK, Tamil Nadu to ‘IOK’ and Karnataka to India’s Jammu which he said is the reason why there are no major riots.

PFI works meticulously through their offices on the national highways in order to attack and block roads to the Indian military during the time of distress is the idea behind strategically occupying such places he expressed. Speaking on the demography, he said 43% Muslims (and 41% Hindus and 16% Christians) in Kerala is troubling and boldly opined that it was Islam to be called out and not just Islamic fundamentalism for all the riots we have been facing. The mentality among the Islamists that there exists a Caliphate in Syria and the loyalty to him will disturb the peace in the nation he said.

Debjani Bhattacharyya from Kolkata in her pitch, said that the deep rooted problem was in the ‘ doctrine of Islam’ and the need of the hour was to modify it. Stone pelting, being a savage act is sadly being practiced in a civilized society and the motto of Destruction cannot be one’s way of life she argued. Speaking on the geography of state of West Bengal, she said that 2500 km long international border which the state possesses, the border with Bangladesh being free has resulted in various terror attacks. The bordering districts of Malda gets notoriously famous for fake currency, 24 Paraganas boasts of bovine trafficking, there are districts which are specialised in weapons, women trafficking and the government pays no heed to such dangerous planning. South 24 Paraganas is infamous for Rohingyas illegal entry into the state while the Government and the police remain mum she said.

The pattern of riots and terror gets rehearsed in various places of West Bengal and it is evident through the seizure of police stations, burning of fire extinguishers which come to douse fire, attacking the government apparatus, burning of trains etc.

Sri Madan Gopal to a question on how terror menace could be stopped, urged Governments to enforce strict laws. He said there has been a promising way of stopping the funding to such NGOs but there are innumerable number of organisations working globally for the cause of Islam. He said the terror being implemented locally is managed globally and the same has to be curbed undoubtedly. He also called for a strong societal response for nullification of terror groups. He concluded stating the political bankruptcy needs to be exposed and it was high time for the need for social media to get proactive rather than reactive.

Adding to Sri Madan Gopal, Sri T G Mohandas in his closing remarks said Population control and implementation of UCC is needed. With the current mindset of Hindus, the societal response might not just help and leaving it to political parties to solve the problem is one part of the solution he added. He called for strong administrative powers, judicial reforms and increasing the police power. He expressed his ire that a sedition case is not accepted even if anti national book is being written and convoluted logic of the judiciary needs some overhaul. Mohandas proudly said the Hindu culture is the one keeping Bharat safe for some handful of police stations cannot control the whole of Bharat.

Debjani Bhattacharyya in her concluding remarks said a special infrastructure for riot management a drone infrastructure to track the terror acts and repealing of Article 30 which provides freedom to have madrasas will need to be taken forward apart from UCC and population control. She said the world need to come together for a consensus to reform Islam and condemning all kinds of terror if not done could be disastrous.

Smt. Shakuntala Iyer welcomed and introduced the audience at the start of the event. 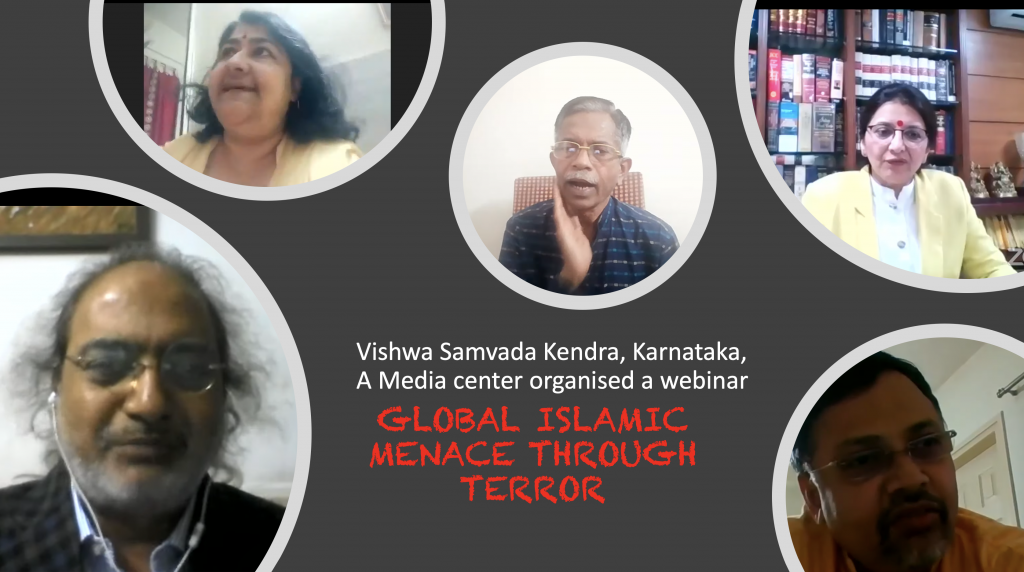