H S Doreswamy is a much-celebrated figure from Karnataka. From being called a Gandhian, freedom fighter the centenarian often treads the path of Left thoughts and is evident from his participation in various protests. The Gandhian freedom fighter is said to have fought British by placing time bombs at their offices qualifies to be a good oxymoron. The freedom fighter takes cover that the bombs would not kill people but would only destroy British documents and the uniqueness lied in deploying rats and tying the bombs to its tails.

Off late he has been voicing his opposition towards Citizenship Amendment Act (CAA) before which he had termed India under Modi and Shah was a threat to democracy. There are proofs of the freedom fighter with journalism student Amulya Leona Norhonha who recently was arrested for a pro Pakistan slogan shouting in the city. He hogged the limelight recently when he called Vir Savarkar a “coward.” It is known to people that it was Savarkar who had inspired the youth to jump into Indian freedom struggle by ways of revolutionary thoughts.

A freedom fighter bad mouthing his non contemporary counterpart is unwonted in India’s freedom struggle. While nationalists questioned Doreswamy for calling Vir Savarkar as coward, the former in an interview to Prajavani, a Kannada daily said, though being a brave freedom fighter initially, Savarkar resorting to cowardice and he seeking mercy needs to be studied carefully. In the same interview, he also has said that Naturam Godse was in Bengaluru for a national RSS event 15 days prior to the death of Mahatma Gandhi and had stayed in the residence of Vasudeva Murthy. Apparently H S Doreswamy claimed to have published it in his news paper ‘Paura Vani’ then.

In connection to the interview, Sri Vadiraj, from Karnataka in his article in the same newspaper Prajavani writes as below:

It is a known fact that Godse was associated with RSS once upon a time. But lest we forget that he was a member and volunteer of the Congress too. Owing to ideological differences he had quit RSS.

Rashtriya Swayamsevak Sangh (RSS) shares cordial relationship with veteran Gandhivadi and freedom fighter H S Doreswamy. RSS leaders have met him in the past and have had discussions with him. Also H S Doreswamy has appreciated the efforts taken by RSS to fight against the dictatorial Emergency imposed by the then PM Indira Gandhi.

H S Doreswamy in his autobiography in Kannada – “Nenapina Suruli teredaga” has written that Naturam Godse who killed Mahatma Gandhi had taken part in an RSS event in Bengaluru (pg 61,62). Apparently in 1999, senior RSS functionary Mai Cha Jayadev had visited H S Doreswamy and apprised him the truth. Another RSS functionary Kru Suryanarayana Rao had written to H S Doreswamy and provided proofs of Godse not having attended the RSS event and much more. In his future editions of the book, Doreswamy has picked facts from these meetings and letter he had received, and has published a part of it in the 2003 edition of the book. In his interview to Prajavani, he makes a mention of Godse’s visit to RSS event and purportedly hidden some facts associated.

The whole controversy erupted when the then SevaDal functionary Rumale Chennabasavayya had made a statement. After RSS being pronounced as clean and holding no role in the death of Mahatma Gandhi by the Honourable Supreme Court, the Central Government lifted the ban which was imposed on the organization. Post such developments, Rumale while speaking in a public rally in Channapatna made a serious allegation that Naturam Godse had taken part in the RSS event in Bengaluru on Jan 17, 18, 19 of January and the plot to kill Mahatma was designed through the event. The report of the speech of Rumale was published in one of the newspaper by name “Tayi Nadu.”

Kru Suryanarayana Rao had appealed to the court in Bengaluru about the false allegation being made and RSS name being got in with ill intentions. H S Doreswamy who also was an evidence in the case has admitted in the court that his newspaper “Paura Vani” on Jan 16, 1948 also had published the news of Godse attending the event in Bengaluru. S K Venkataranga Iyyengar an advocate intervened in the case to ensure Rumale’s social life is not disturbed and the case was withdrawn. Later Rumale Chennabasavayya has attended a RSS event had expressed his guilt over the whole episode.
Despite knowing all these facts, H S Doreswamy has hidden in his autobiography some key details. The backing he had to write in “Paura Vani” then was the conversation he has had with the stringer Narayana Rao. In his autobiography, H S Doreswamy also states that Narayana Rao was an honest journalist and there were all reasons why he had to be believed (pg 180)

However the court records during the time of trial clearly state that Naturam Godse during Jan 17, 18, 19 of 1948 was in Delhi. More details are available in K L Gauba’s book “Assassination of Mahatma Gandhi.” The court records show that Godse with his partner Apte flew from Mumbai to Delhi on 17th Jan 1948. They were staying at Marina Hotel till the 20th. In that case how could anyone consider Doreswamy’s stringer’s claim that Godse was in Bengaluru as ultimate truth?

It is a known fact that Godse was associated with RSS once upon a time. But lest we forget that he was a member and volunteer of the Congress too. Owing to ideological differences he had quit RSS. After parting ways with RSS, Godse had started a newspaper by name “Agrani” and the court has in its record, wherein Godse had written condemning critically the thoughts and the leaders of RSS.

“Despite all these, if I keep sticking on to my views, Kind hearted and friendly RSS leaders should not feel that I am adamant and am of an opinion that the rabbit I have caught has only three legs” These words of H S Doreswamy in his autobiography (Page 180) throws light on both the sides of the controversy of the day. 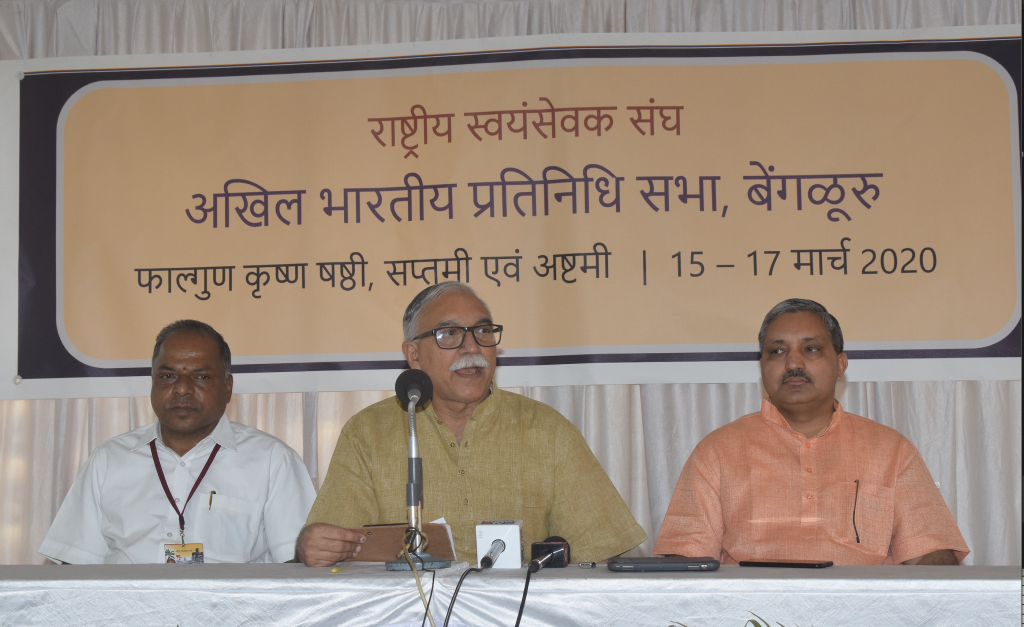