Hindutva seeks to emphasise on the commonalities that exist among Indian people belonging to different faiths, rather than hyping up or harping on the differences. Uniformity is not what we aim at, but assimilation: This is consistent with the abiding spirit of India.

In India, the aim of religion is not intellectual conformity to a particular set of dogmas and to bring about uniformity among humankind. Instead, our purpose has been to bring about commonality in diversity. The Upanishadic dictum, ekam sat viprahbahudavadantim (Truth is one and the wise men call it differently) is the idea on which our world view was shaped. In India, religion is not an endless conflict between believers of a particular dogma and those who do not believe in it. Abrahamic religions believe whatever their Prophets have decreed are the only things that are divine and everything else is profane. Our concept of religion is Dharma—that which holds us together. The aim of religion is spiritual, not mere metaphysical conversion. It is a movement from avidya (ignorance) to vidya (knowledge) and bodha (wisdom). When vidya is attained, there is no estrangement. This is Hindu Universalism. In this philosophy, there is no place for looking at binaries. The hallmark of all ideas emanated in the West is this search for binaries and points of conflict. The ultimate aim of all these philosophies emanated from Abrahamic roots is to attain uniformity. But the aim of Dharmic thought is to make the world “one divine whole”. That is why in Bhagavad Gita, Lord Krishna says: “Whenever there is a decline of righteousness, then I send forth myself.” Yada yada hi dharmasya, glanir bhavathi bharata….So Bhagwan takes birth to reinstate Dharma, not to set up a different creed; and the purpose is to lead humanity to Dharma.

Several Western politicians like former Australian Prime Minister John Howard have expressed their opposition to multicultural policies. Trevor Phillips, former chair of the Equality and Human Rights Commission of the United Kingdom, in his widely publicised study, found that British Muslims were increasingly becoming “a nation within a nation”, thanks to “the failed policy of multiculturalism”. According to Philips, UK is “in danger of sacrificing a generation of young British people to values that are antithetical to the beliefs of most of us, including many Muslims”. He called for a recast of the policy, adopting a tougher approach to integration.

Even as the topic of Muslim integration has become a “hot-button” issue in the West, India has managed to fare better in this regard, thanks to the inherent Dharmic values of this land that have helped humanise Islam. We must bear in mind that integration cannot happen on the basis of false premises and narratives. Honesty should be the buzzword. The Western ideas of secularism and multiculturalism have been thrust upon us to counter the imagined threat of majoritarianism. When asked to suggest steps to bring about harmony between Hindus and Muslims by Dr Saifuddin Jilani, in an interview published in 1972, this is what Param Poojaniya Guruji said: “It is difficult to immediately suggest something specific. But it must be given a serious thought. Real religious education on a wider scale can be one such step. Not the Dharma-less education that is being imparted by nowadays by our politicians, but true, good, religious education which lets people understand the true wisdom of Islam and Hindu Dharma. People should be taught that every religion guides an individual to be true, pure and welfare-oriented… Then, second step is to teach history as it was. Today we are taught a distorted version of history. If there was aggression from the Muslim invaders in the past, say so and also clarify that the aggressors were foreigners and they belong to the past. Muslims today should be told that they belong to this country and that this aggression is not their heritage. Instead of being taught what is true, the Muslim now are today being taught a distorted and false version. Truth cannot be hidden for long. However long you hide it, ultimately it comes out and creates only far worse feelings. Therefore, I say that history should be taught as it is, If Afzal Khan was killed by Shivaji, say that a foreign aggressor was killed by a national hero because of their tense relations. We should tell them that we all belong to this nation. Therefore, our heritage is not of Afzal Khan. But no one has the courage to say so. I have already condemned this mutilation of history many times and condemn it today too.”

All countries, at some point or the other, have to deal with the issue of integration. The best way to deal with it is the Hindutva way: It seeks to emphasise on the commonalities that exist among Indian people belonging to different faiths rather than hyping up or harping on the differences. Uniformity is not what we aim at, but assimilation: This is consistent with the abiding spirit of India. As Vivekananda says: “We believe not only in universal toleration, but we accept all religions as true.” This is Hindu Universalism. It is more powerful and durable and offers a better solution to our problems that haunt us than those which are offered to us “second-hand from Western sources”. When the Sangh talks about “Indianisation”, it talks from this standpoint, though the Left-Liberals have tried to create confusion over this among minority communities. It is important to clear the air on the concept of “Indianisation”. It is not an effort to gobble up other cultures and faiths to give shape to a unified, homogenised “Indian culture”. In this context, I would like to quote Shri Guruji. In an interview to Dr Saifuddin Jilani, Shri Guruji says: “Indianisation was of course the slogan given by Jana Sangh. Why should there be such confusion? Indianisation does not mean converting all people to Hinduism. Let us all realize that we are the children of this soil and we must have our allegiance to this land. We belong to the same society and that our ancestors are common. That our aspirations are also common. Understanding this is Indianisation in the real sense. Indianisation does not mean that one should be asked to quit his religious system. We neither said this nor are we going to say so. Rather we believe that a single religious system for the entire human society is not suitable.”

In the very first chapter of the Bible, God instructs Adam and Eve to “fill the earth and subdue it”. Judaism, which first produced monotheism, the core philosophy of all Abrahamic religions, was opposed to the Pagan religion which personified forces of nature and deified them—in many ways much similar to Hindu Dharma. In Abrahamic religions, God was someone detached from the earth, sitting high up in the sky, and beyond the forces of nature.

This separation of God from nature has been leading to several far-reaching consequences. Abrahamic religionists imagined that men occupied an exalted position in the natural order compared to the nature-based pagans. The Hebrew Bible says God made humanity a little lower than him, “with dominion over God’s creation”. The God has put “all things under their feet, all sheep and  oxen, and also the beasts of the field, the birds of the air, and the fish of the sea,  whatever passes along the paths of the seas”. In the Epistle to the Romans in the New Testament, Paul, the Apostle, says: “Who changed the truth of God into a lie, and worshipped and served the creature more than the Creator, who is blessed for ever. …For this cause God gave them up unto vile affections: for even their women did change the natural use into that which is against nature” (Romans 1:25& 26).

According to the Biblical concept, the separation between the abode of supernatural God and the human-ruled earth is absolute, and that to venerate nature meant idolatry. Being idolatrous in that sense, Hindus and Pagans became target groups to be converted or killed. The Christians and later Muslims considered it their divine duty to exterminate “idolatrous pagans” and destroy their temples and places of worship. Thousands of temples were destroyed by the Portuguese invaders led by St Xavier in Goa and Kerala and by Muslim invaders in the rest of the country.

According to environmental historian Clarence J. Glacken, one of the key ideas in the religious and philosophical thought of the Western civilization, which is derived from Christianity, is that humans, sinful though they are, nevertheless occupy “a position on earth comparable to that of God in the universe”. This Biblical belief is at the root of all environmental issues in the world today.

In the wake of a looming environmental crisis and the allegation that the problem stemmed from “Christian arrogance and anthropocentrism”, there have been efforts by some Christian denominations to get around this by proposing new concepts like the “stewardship” theory. But this is not a major departure from the original Biblical idea. Moreover, there aren’t many takers for it among conservative Christians in the West. They continue to propagate the theory that the whole debate about the environmental issue is a “scam” and a “hoax”.

The only lasting solution to the issue is to respect the forces of nature. Hindu philosophy considers nature to be mother and that is the best way forward.

With the advent of Marxism, this gap between nature and human beings widened further. If Semitic religions put it overtly, Marx defined his political ideology on the very basis of this division. He explicitly argued that the humankind has evolved after the persistent confrontation with nature.

Marxism, fundamentally a “productivist” ideology, not an inclusive one, has obviously little to say, and little concern, about the fate of the environment. History, therefore, is nothing but human beings’ efforts to subjugate nature. Upon this very premature and pessimistic premise, Communists have erected their ideology and the contemporary development models.

Thu Sep 10 , 2020
World is experiencing religious terrorism from last 2000 years, which got aggravated with the advent of Islam. While the fingers point at growing Islamic thought on occurrence of such riots, hiding truth, protecting the perpetrators of terror happens every time. The oft repeated maxim “Blame terrorist not the religion” gets […] 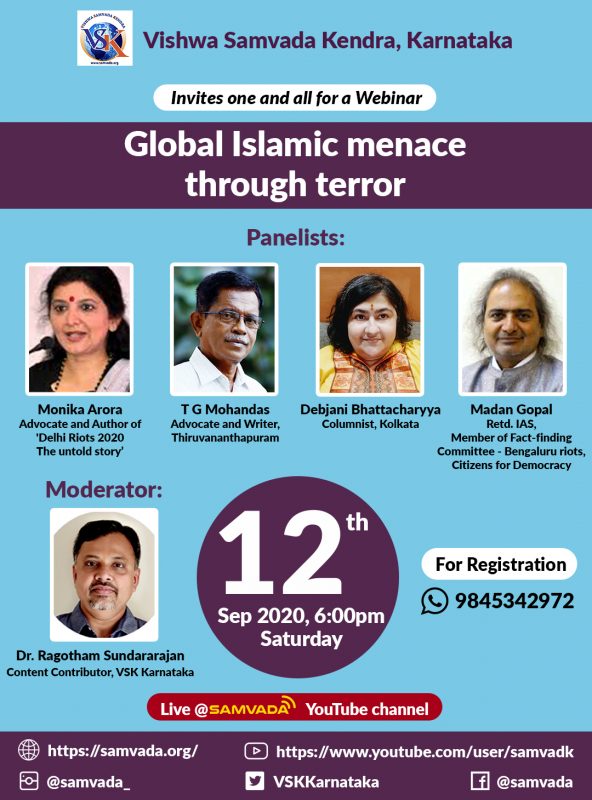